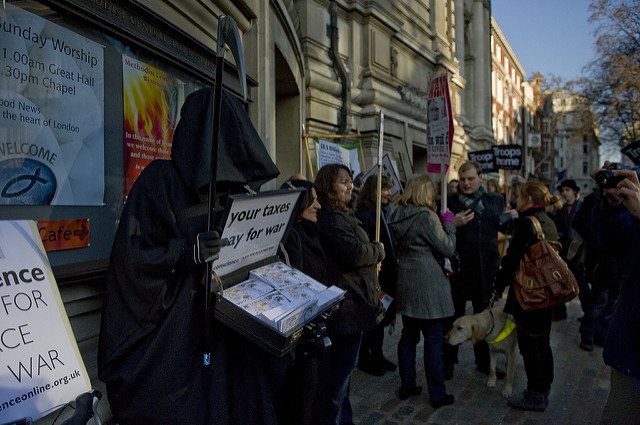 Public Interest Lawyers (PIL), the law firm responsible for pursuing millions of pounds worth of claims for abuses by British soldiers in Iraq, is allegedly closing. The news is being pointedly celebrated by government officials and right-wing media, which have vilified the law firm even though it has achieved justice for hundreds of victims.

The nail in PIL’s coffin

PIL came under fire during the Al Sweady Inquiry, which took ten years to conclude. This investigated allegations of human rights abuses against Iraqi nationals by British troops in the aftermath of a 2004 firefight – the Battle of Danny Boy in southern Iraq.

The basis for the inquiry were allegations of unlawful killing by British soldiers, but these were dropped due to insufficient evidence.

At the same time, there were soldiers who had both breached the Geneva Convention and laws of war, which the report admitted (in paragraph 192):

I have come to the conclusion that the conduct of various individual soldiers and some of the procedures being followed by the British military in 2004 fell below the high standards normally to be expected of the British Army. In addition, on a number of other occasions, my findings went further.

. . . certain aspects of the way in which the nine Iraqi detainees, with whom this Inquiry is primarily concerned, were treated by the British military, during the time they were in British custody during 2004, amounted to actual or possible ill-treatment.

Despite this, its main message was to demonise the fact that it found the original claim to be based on ‘lies’.

Since the the conclusion of the inquiry, the law firm’s founder, Phil Shiner, has been under investigation by the Solicitors Regulation Authority (SRA) because the Ministry of Defence (MoD) had reported him. The same MoD which had been at the sharp end of these claims.

This has not been the first time the government has lashed out at Shiner, who has been continuously working to vindicate Iraqi nationals who have suffered at the hands of British troops, starting with the famous case of Baha Musa.

Shiner has spoken previously about being fearful for his own safety and reputation as ‘forces are brought to bear against him’. In an interview with The Independent over a year ago, he said:

You throw a load of mud at someone and you know that some of it will stick, and if you leave me hanging out to dry in the sun long enough it will bake so hard it will be impossible to get off…

That’s what they are doing, and they are hoping to put me under so much stress that, if I don’t go out of business because they’ve put me to so much work, then I just end up calling it a day.

The SRA was given a dossier of information against Shiner, on the directions of then Prime Minister David Cameron, which includes claims that he used an agent to gather up claimants. He mentions in the same Independent interview that the government has itself used an agent (Abu Jamal) to ‘chaperone’ witnesses and victims. The SRA is still pursuing investigations of professional misconduct, and the government are keen to get Shiner struck off. Shiner is now being prosecuted by the Solicitors Disciplinary Tribunal (SDT), but exact details have been quite secretive, according to the Law Gazette.

The Legal Aid Agency, a government agency responsible for administering legal aid, terminated its contract with the law firm, stating it had breached contractual requirements, but without revealing what those breaches were. The revocation of the contract also means that fees are being clawed back from the firm. The changes in Legal Aid will also make it difficult for claims of torture to be made.

Cameron made very public his grudge against Shiner’s firm and another – Leigh Day – which has been pursuing claims on behalf of Iraqi nationals. Leigh Day has also been referred to the SDT. Cameron allegedly called the firms ‘ambulance chasers’ and referred to the cases as “spurious claims”.

Is the MoD complaining because it’s responsible?

The MoD has paid out £20m for over 300 claims, which is an unusual thing to do for ‘spurious’ claims, as pointed out by Lieutenant-Colonel Nicholas Mercer – the British Army’s top legal adviser in Iraq in 2003. He said in January 2016 in another article by The Independent:

There were plenty of serving officers and others who were concerned about our conduct in Iraq and who still are. It is time this matter was addressed properly rather than this desperate attempt to ridicule the lawyers.

PIL, along with the European Centre for Constitutional and Human Rights (ECCHR), submitted hundreds of cases to the International Criminal Court (ICC). But the ICC has stated it sees no basis to investigate.

Because this whole issue has been an embarrassment to the government, it is not surprising that the closure of PIL has brought on celebration. A spokesperson for Prime Minister Theresa May, for example, said:

We made a manifesto commitment to addressing these types of spurious claims that companies like PIL are pursuing.

The closure of PIL shows that we are making progress on that, tackling these types of firms head on to make sure we get the right outcome for our armed forces who show such bravery in the most difficult of circumstances.

The right-wing media has been celebrating the closure of PIL, as have many ex-servicemen, because of the perception that the organisation carried out some kind of a witch hunt against the armed forces.

The legal community, however, has spoken up for Shiner and PIL, and has expressed concern about the lack of information surrounding the allegations against him.

Nobody – newspapers, politicians etc – should be reaching conclusions on Public Interest Lawyers until disciplinary investigations conclude

It seems that the media and the public, particularly those that support our armed forces, have already placed Shiner on the stand and found him guilty – even though the charges are unclear.

The pursuit of claims against individual officers and the MoD has been taken as a personal attack. But it isn’t. It should simply be taken as an expectation of the highest standards when troops are abroad, and an unequivocal demand that human rights standards and international laws are adhered to at all times. Those same standards we hold others accountable to.

PIL has achieved justice for Iraqi victims many times before, evident in the high payouts received. It now seems that it’s being punished for that.

– Support the work of The European Centre for Constitutional and Human Rights.