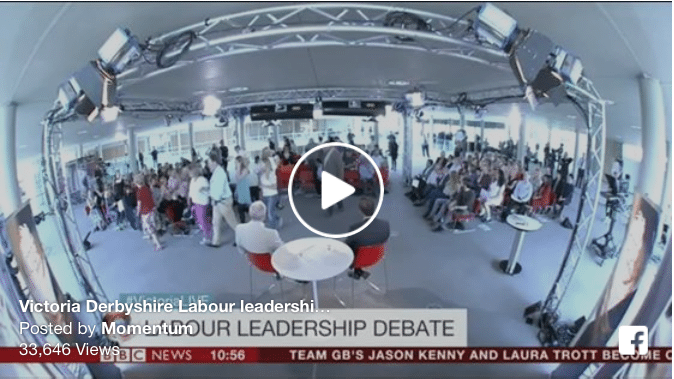 The most painfully awkward moment of the Labour leadership contest happened live on air this week, when the undecided section of the studio audience was asked to move to the section supporting the candidate to whom they would now give their vote. They all walked across to Jeremy Corbyn’s section, leaving Owen Smith speechless.

The scenes took place during a Labour leadership debate chaired by Victoria Derbyshire for the BBC. At the end of the debate, Derbyshire asked the audience:

This is the section of people who said they came along today [so] they could make up their mind.

If you’ve come to a conclusion and you’re now going to support Owen Smith or the incumbent Jeremy Corbyn, could I ask you to walk to the relevant section?

All but two or three walked to the section where Corbyn supporters were sitting. Derbyshire was clearly taken aback, saying:

Most people in the undecided section have moved and swelled the ranks of the Jeremy Corbyn supporters.

Despite the Labour Party purging 130,000 eligible members from voting, Jeremy Corbyn remains the favourite to win the forthcoming leadership election that was triggered by the mass resignation of Labour MPs. Since the attempted coup began, the Labour leader has drawn tens of thousands of people to rallies across the country, and the Labour Party membership has swelled to the highest numbers in modern history (more than half a million).

The country’s largest unions have provided their support, and so have a landslide number of Constituency Labour Parties .

The Smith campaign continues, despite Labour MPs becoming so concerned about a potential loss that they have been calling for David Miliband to make a comeback. If such an event took place, the Parliamentary Labour Party’s relentless coup would have thrown not one, not two, but three of their own under the bus in a matter of weeks. First Corbyn, then Angela Eagle, and now potentially Owen Smith.

Meanwhile, those with a more rational outlook might suggest that swelling party membership, rallies that are bringing people out for political change in a way not seen for decades, and social/new media buzzing with the energy of a re-engaged labour movement might actually be a good thing for British democracy.