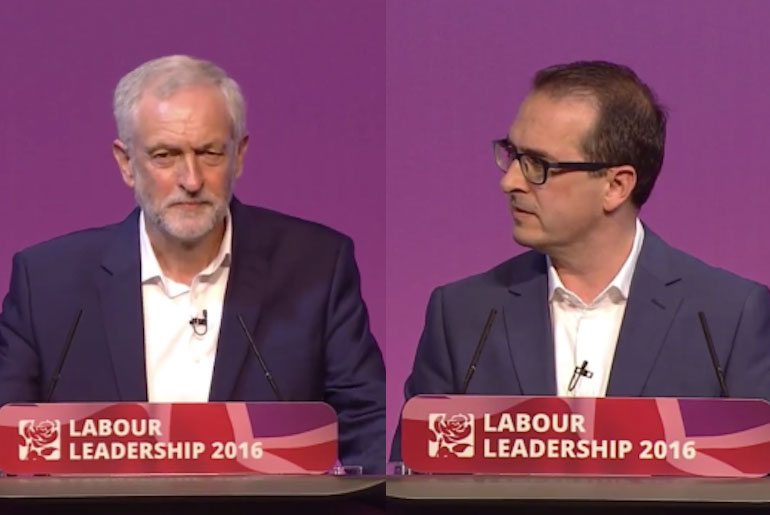 For anyone who missed the televised Labour leadership debate in Glasgow on 25 August, I thought it might be fun to highlight some of the key moments.

Is this the best Smith’s got?

Owen Smith is apparently against ‘mud-slinging’ and childish disrespect. Unless it’s about Corbyn, in which case it’s okay.

Merely days after referring to Corbyn as a “lunatic”, he crowed to the nation:

Jeremy, I agree with you that there is no place for personal abuse in politics, but, you know, you’re not the only socialist in the village. [Responding to laughter] Well I don’t know why you’re laughing. Jeremy’s been, you know, pretty ‘fruity’ with his language on occasion. Perhaps I’ll quote you bits later on.

Smith, already beginning to lose his cool at being caught out so early on in the debate, replied:

OK Jeremy, well in that case I’ll just quote this to you. You know, I got attacked a bit earlier this week for using the word ‘lunatic’, for which I’ve apologised. Jeremy Corbyn called a Tory MP a lunatic in 1992, and he used the word again in parliament in 1993. So you know, I think there’s sauce for the goose and sauce for the gander, Jeremy. You’ve been just a bit ‘fruity’ yourself on occasion.

That’s right. The best the Labour contender could come up with was an occasion when Corbyn called a member of the Tory opposition a lunatic (not his own party leader), over twenty years ago.

The host gave Corbyn a chance to respond to the frankly ludicrous argument, to which he retorted:

I’d rather we got on to discussing politics.

Round one to Corbyn

It was going to be tough to top such hypocrisy at the outset, but Smith managed it.

Straight after making a point of haranguing Corbyn for Labour’s third place position behind the Tories and the SNP in Scotland, he then, without blinking an eyelid, went on to describe Kezia Dugdale (the Scottish Labour leader, who just happened to recently come out in support of him) as doing a “brilliant job”. Seemingly, Labour’s position in Scotland is entirely down to Corbyn, and nothing at all to do with the actual Scottish Labour leader, who’s apparently ace. And, of course, nothing to do with Scottish Labour’s behaviour during the 2014 independence referendum.

Responding to the inevitable taunting, Smith then had the nerve to continue:

Yes, Owen. We felt the same when you and your chums effectively did that (and far worse) to the overwhelmingly elected leader of the entire Labour Party, engineering this coup in the first place.

Smith believes his ace card is his determination that the referendum result of 23 June should be overturned.

The lion’s share of Corbyn and Labour supporters voted to remain. Many still feel passionately about the cause, but also believe such unilateral action would only stir up the whole hornet’s nest once more: perhaps even cause riots.

Smith remains apparently obtuse to that fact. He does not appreciate that his obstinate policy would likely just divide the country even further and alienate thousands from the Labour Party, very probably resulting in a swing towards far-right parties such as UKIP. And that is definitely not going to make Britain a more equitable place to live.

Smith continually goaded Corbyn with the suggestion that he didn’t actually even vote for the UK to remain in the European Union, citing his opposition to Britain’s initial membership over twenty years ago – at a different time, in a very different political landscape.

“I want to hear you say it”, Smith repeated over and over again. After some cringeworthy playground-like bickering, finally Corbyn snapped (in as far as the guy ever ‘snaps’). In an angrier tone, he looked the Welshman straight in the eye and stopped him dead in his tracks:

Owen, you know perfectly well what the answer is, that I voted remain. And I’m very surprised, and actually quite disappointed, that you should even raise this question.

The only people who raised that question were actually The Daily Mail at the time.

The Labour leader then simply offered his adversary a smirk, which really said it all.

Following Corbyn’s closing speech, delivered calmly and stoically from his designated pulpit, Owen Smith waltzed out from behind the podium to the centre stage: like a child in a primary school play trying to one-up their classmates’ performances. It literally made me wince. He came across as a kind of game show host, about to dazzle the audience with a Tom Jones impression. But his cockiness was shut down in a heartbeat, in an almost brutal fashion.

In his ineptitude, Smith started one of his rousing statements with the words:

In my view right now, it’s the biggest choice all of us have faced in a generation. We can stick with Jeremy Corbyn…

He didn’t get the chance to progress with that sentence.

No, that much was all the majority of the audience really needed to hear.

Here is the precise moment Smith was rendered speechless.