JEZ HE DID! Despite a purge that prevented a quarter of Labour supporters from voting - The Canary 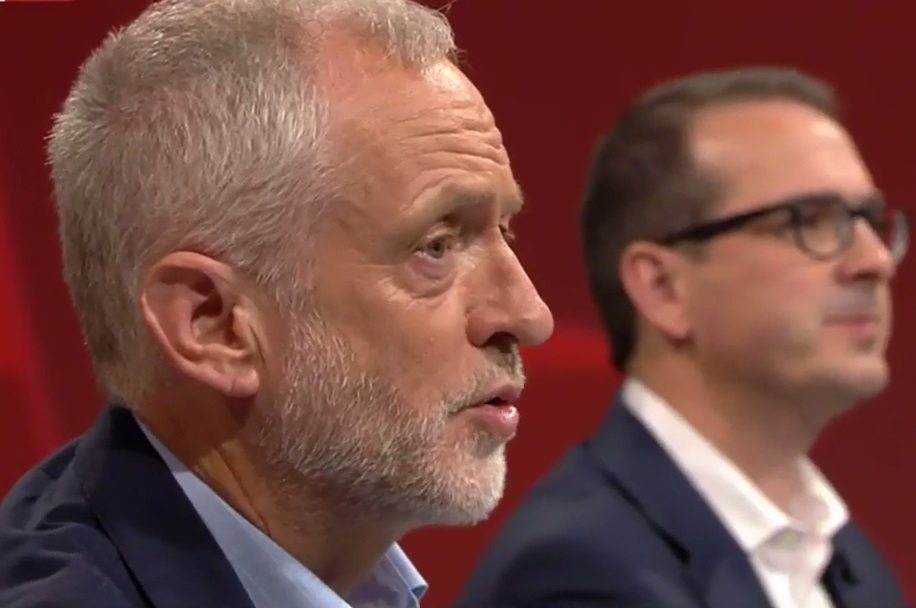 Jeremy Corbyn has held on to his Labour leadership position, despite a purge that may have prevented around a quarter of potential supporters from voting in the contest. Corbyn’s renewed mandate will bring the coup against him to a conclusion, for now.

In the lead up to the result being announced, the incumbent Jeremy Corbyn was strongly tipped to win. The latest YouGov poll had found that 62% of eligible voters indicated Corbyn as their preference for Labour leader. Only 38% said the same of Smith.

The bookies William Hill had declared the contest a “one-horse race” after its odds put Corbyn at 98% chance of winning.

And those predictions turned out to be right, with Corbyn announced the winner at the Labour Party conference this morning.

A conclusion, but not foregone

But, as the full extent of the purge of supporters is made clear, this result was not a foregone conclusion. An analysis was laid out on Twitter by Labour Éoin on the eve of the vote:

Weighing up all available evidence I've spent months gathering, about 250,000 who wanted to vote for Labour Leader were unable to do so pic.twitter.com/Wo59L3wXzs

As this evidence suggests, potential voters were axed in the purge for a number of reasons. Many were denied a vote because they joined the party after the 12 January. This rule was imposed after the leadership election began. A rule the party wanted so much it was willing to fight in court to retain it.

Others did not receive their ballot due to an IT glitch, payments not processing, or the Labour Party not being able to find them on the electoral register.

Of the hundreds of thousands purged, according to these figures, less than twenty thousand were banned for ‘abusive’ language or previously expressing support for another party. Some of the ‘abusive’ language that warranted being banned was only defined after the contest had started.

But not even a purge on such a large scale was able to oust Corbyn from Labour’s top job.

Uniting the Labour party, after the purge

One challenge for the party now is to ensure the petty and damaging infighting comes to an end. As MP Andy Burnham noted prior to the result, the Parliamentary Labour Party’s (PLP) response to Corbyn’s election in 2015 was “sulphurous”. He insisted that a win for Corbyn should give him the right to lead “without interruptions, noises off and undermining” from the PLP.

Forging unity within the PLP will need compromise on both sides, with the views of all supporters respected. As Corbyn himself stated at the end of the contest:

This summer, we have had a debate about the future of Labour and the future of Britain. It has been robust, and at times difficult, but it has been overwhelmingly respectful in tone.

That results of that “debate” need to be heeded.

It’s about the destination, as well as the journey

Another test for Corbyn’s Labour Party will be to ensure this electoral success can be translated into the same on a national scale. For many MPs, but perhaps not the core group of Blairites ideologically opposed to Corbyn’s non-neoliberal orthodoxy, seeing the party on course for a general election win may cause them to get behind their leader.

The groundwork for this success has already been laid. There is now a mass movement behind the Labour Party made up of members and supporters. Corbyn has recently detailed plans to mobilise this movement by creating “organising academies” across the country which could turn it into a real fighting force at the next general election.

As Corbyn’s campaign director Sam Tarry explained, when the policy was announced:

There will be a particular strategic focus on the communities we need to reach in order to build a Labour message that resonates in every corner of Britain, most significantly post-industrial communities and those facing a challenge from Ukip.

This strategy could lead Labour to electoral success at the next general election. Ukip voters are already voicing approval for Corbyn, due to his respect for the EU referendum result. If this approval ensures Ukip voters at least listen to the Labour Party’s pledges in the run-up to the 2020 election, who knows what may happen as a result.

That election is, of course, a long way off. For now, Corbyn will be emboldened by the results of this one. How the coup plotters will react to the result will become apparent over the next few days. But, once again, Corbyn has been given the mandate.

Let’s hope, this time round, the PLP respects that.