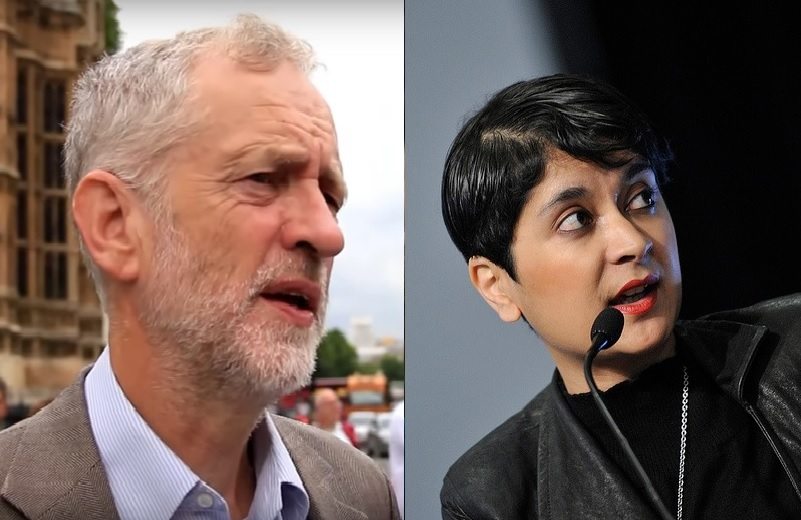 News has emerged that the Labour Party has decided to abstain in an upcoming vote on the Investigatory Powers (IP) bill. But, rather than condemn the party as a whole, media and political commentators pinned the blame on one of Jeremy Corbyn’s strongest and newest allies in parliament, Shami Chakrabarti.

Chakrabarti is the ex-Director of human rights charity Liberty and was made a Labour peer by Corbyn in August. She was also just appointed as Labour’s Attorney General. Less than a week ago, in fact. But when Labour’s betrayal of the British public comes to the fore, in its refusal to oppose the IP bill, these critics choose only to point their finger at its latest arrival.

The IP bill, known as the Snooper’s Charter, is being debated in the House of Lords this week. Upon hearing the news that Labour peers would abstain from voting on the bill, The Independent, The Huffington Post and The Mirror all published claims that, as a new Labour peer, Chakrabarti would also be abstaining. And, they continued, the decision to do so brands the human rights advocate as a sellout.

Details about how Chakrabarti’s voting intention was confirmed is nonexistent. The Mirror came closest to providing some evidence for why it’s believed the new Labour peer will abstain from the vote. It wrote:

A Labour source in the Lords confirmed that Ms Chakrabarti will not vote against the Bill. He said: ‘Our peers are instructed to abstain. We would expect all frontbenchers to follow the whip.’

All that can be gleaned from this statement is that an anonymous source claims Chakrabarti will not vote against the bill because the whip, the disciplinary party official who orders parliamentarians to vote a certain way, has told her not to. Whether Chakrabarti will do as the whip demands is yet to be seen, and these articles provide very little to confirm that either way.

It’s not just about Liberty

Obviously, with Chakrabarti’s past as the Director of an organisation that champions human rights, it would be extremely jarring were she to not vote against the IP bill. It threatens the fundamental rights of all UK citizens, enshrining mass surveillance into law. The IP bill would ensure nothing the population communicates electronically, such as calls, emails, web browsing, online shopping, or bank transactions, escapes the eye of the state. As Bella Sankey, Director of Policy for Liberty, explained:

In fact, the proposals in the bill are so damaging to the public’s human rights that the UK government has already been taken to court twice over the practices. Once by Privacy International at the Investigatory Powers Tribunal in July. And, more recently, in a case brought by 10 organisations against the government in the European Court of Human Rights.

But, Chakrabarti’s intentions are just the tip of a very large iceberg. When the bill was voted on in the House of Commons in June, 444 MPs voted for it. 162 of those voting were Labour MPs. So, while the Liberal Democrat leader Tim Farron is generously quoted in these articles attacking Chakrabarti for what she might do, his attention also needs to be on those who have already voiced support for the bill.

It’s just about credibility, of Corbyn too

These murmurings over Chakrabarti’s credibility are not unique. On 9 October we were exposed to a similar assessment of her character when it was discovered that her son attends private school, while she condemns the Tory government’s plan to expand grammar schools.

And the ex-Liberty Director was also accused of ‘selling out‘ the Jewish community in her “whitewash” report on antisemitism. The report, which was instigated by Corbyn, was criticised for recommending that, essentially, those accused of antisemitism deserve a fair trial. And she was condemned for concluding that antisemitism was not rife in the Labour Party.

In terms of credibility, that’s three times a charm for Chakrabarti. That seed, that she’s a ‘sell out’, has now been firmly planted in the headlines and, therefore, the public’s mind.

Whether the claim is true or not will become clear from her choices in her new parliamentary activities. Her reputation thus far, in her legal practice as a barrister and the Director of Liberty, suggests the exact opposite.

But the establishment’s message is clear. Corbyn’s choice for the House of Lords and his new Attorney General is not to be trusted. Which is, of course, the exact same point they make about him, whenever they get the chance.

– Read more Canary articles about the IP bill and the dangers of mass surveillance.

– Take action to protect your human right’s with Liberty.