A Tory MP has a brilliant plan for her £12bn budget, it's just a shame it's probably illegal - Canary 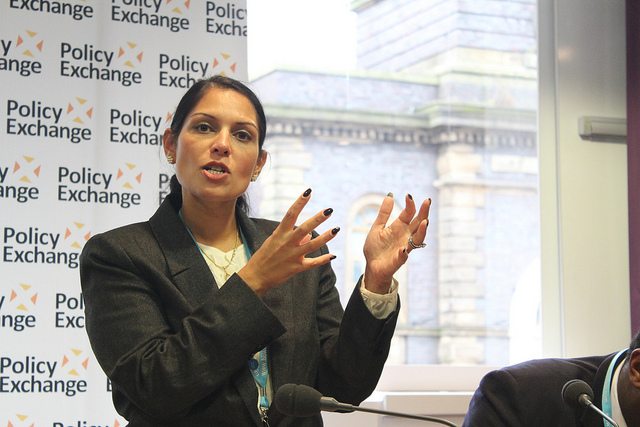 Patel appears to be on the media warpath against her own Department for International Development (DFID). Known as a critic of the 0.7% GDP target, which amounts to around £12bn, she may be using these large expenditure figures as an excuse to say that UK aid money is being wasted, and justify her ‘overhaul’ of international development based on “core Conservative principles“.

According to the BBC:

Ms Patel also wants to use bilateral aid to secure new trade deals and make allies in the World Trade Organization, which the UK will need after Brexit. She also hopes to use aid to reduce the flow of migrants to Europe.

This is quite contrary to the objectives of overseas development assistance (ODA), which is to be used to further the economic welfare of people in developing countries. It is, in fact, illegal – unless those trade deals specifically reduce poverty in the receiving country.

Patel’s changes may be seen after DFID’s ‘Multilateral Aid Review’ is published. And Patel seems determined that it is large international bodies such as UN agencies that are ‘wasting’ taxpayers’ money.

42.3% of the total aid budget is spent through multilateral agencies and receives a fair amount of scrutiny, as taxpayers’ money should.

Talking to The Telegraph, Patel said that her aid review will “lay bare the way large aid agencies fail to get good value for money on British taxpayer-funded aid projects”:

We will call out those institutions that are not performing for our taxpayers and are failing the people that they should be there supporting.

These organisations are there for their beneficiaries – not for their own self-serving interests.

The Independent Commission of Aid Impact (ICAI) is an independent aid watchdog, and in a July 2015 report, it did not say value for money was the problem. Cost effectiveness was found to be fairly good. Instead, it warned that DFID needed to work on its strategy with multilateral agencies.

Spending on multilateral organisations is also as high as it is because DFID doesn’t have the capacity to manage its budget any other way.

DFID’s administration budget (the amount of money spent on running costs like staff and office space) has more than halved from £72m to £34m. Some argue this is a false economy, which means more programme money has to be spent on multilateral projects or expensive consultancies.

Patel may be saying what she hopes will resonate with the British public, as people are concerned about where their tax pounds are spent. But as far as eliminating poverty goes, she could well be trying to reinvent a wheel that runs reasonably well, and replace it with one to take the aid vehicle in a completely different direction.

– See what DFID is spending their money on using its Development Tracker.

– Read more Canary articles on what the Conservative government is up to.

Correction: In a previous version of this article it stated that ICAI was conducting the present Multilateral Aid Review. It is not. It conducts many other reviews, for an updated list of upcoming reviews see here.