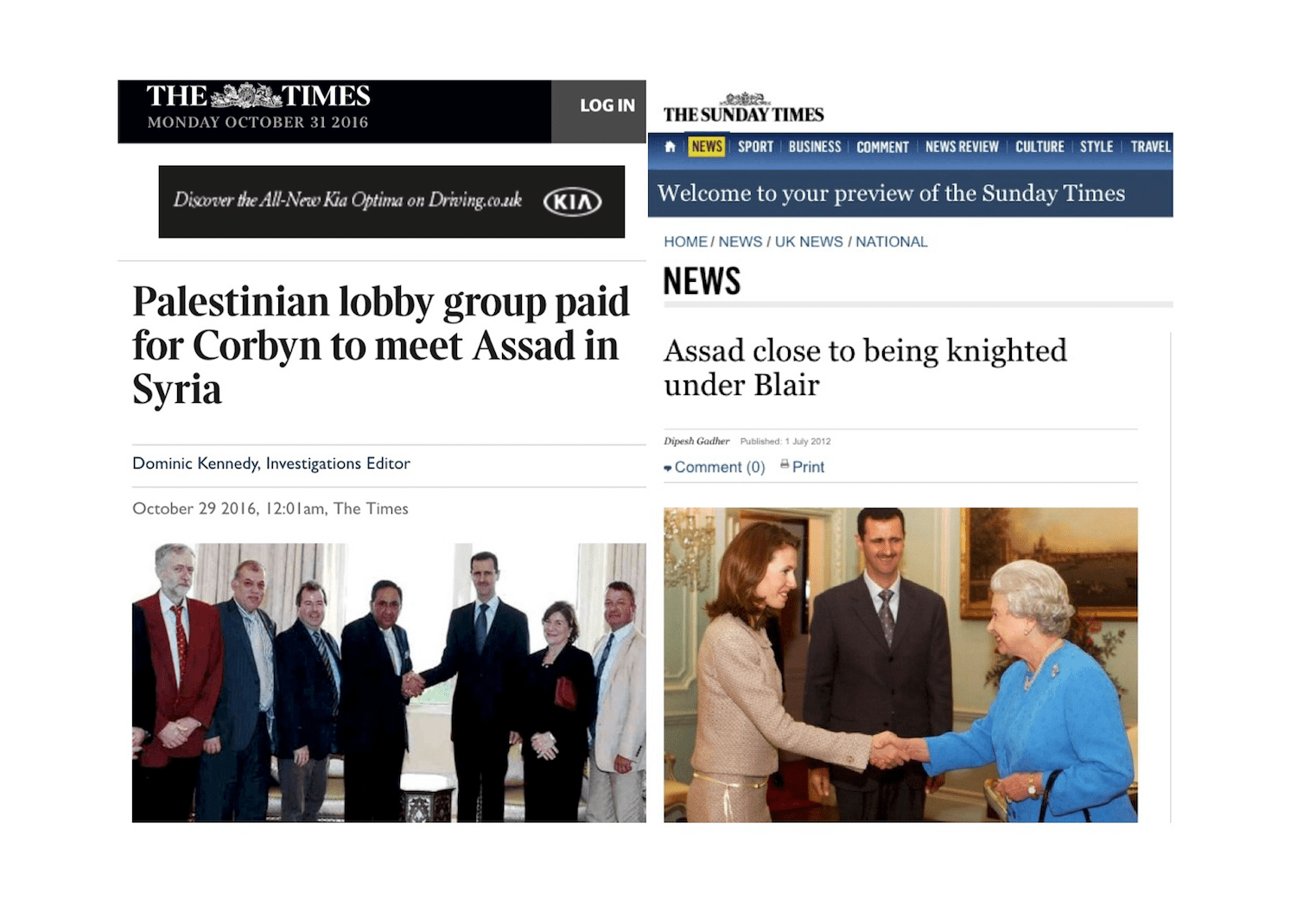 Headlines in the right-wing press are trying to link Labour leader Jeremy Corbyn to both Syrian leader Bashar al-Assad and antisemitic ideas. But it’s just another baseless claim.

An archive photo paraded as ‘news’

Over the weekend of 29 and 30 October, right-wing media outlets The Times [paywall], The Daily Mail and The Daily Express ran headlines that Jeremy Corbyn accepted a free trip to meet President Assad in Syria from a Palestinian lobby group.

In one article, we see Corbyn alongside Assad. But all pieces mention that the Palestinian Return Centre (PRC) funded the trip.

The articles appear to be another attempt to label Corbyn and his associates as antisemitic, and to show that he keeps friends with ‘terrorists’ and ‘dictators’.

Some might remember that four years prior, The Sunday Times wrote a similar article about how then-Prime Minister Tony Blair had urged the Queen to give Assad a knighthood. The leader visited the UK on a state visit, but it wasn’t funded by the Palestinian group. It was funded by the public purse. Potential suffering in the country at the time was unacknowledged prior to the conflict, which started in 2011. And all stops were pulled out for the visit – including a meeting with the Queen.

Corbyn’s visit, on the other hand, was for the purpose of seeing Palestinian refugee camps, not to meet Assad. And it was organised by the PRC as a parliamentary delegation, which it often does in order to raise awareness of the situation of Palestinian refugees.

The London-based human rights organisation, which advocates for the right of return for Palestinian refugees, has often come under attack by pro-Israel groups, which have accused it of being funded by Hamas – a suggestion based on hearsay.

In fact, the PRC won a battle to receive UN consultative status in 2015. It has been at the centre of a recent attack after it held an event in parliament revisiting the Balfour Declaration. It urged Britain to “apologise for past crimes in Palestine”. But in the meeting, comments were allegedly made that likened Israel to Daesh (Isis/Isil) and blamed Jews for the Holocaust. Baroness Jenny Tonge, the Liberal Democrat peer who chaired the meeting, was suspended by her party and has since resigned.

But a statement from the organisation soon detailed inaccuracies in the right-wing press reporting. These included claims that comments were made by a panel member, that audience members applauded the comments, and the use of misleading language to suggest Tonge was antisemitic. They say:

‘poor’ and ‘lazy’ journalism notably omits from the story that the comment came from a member of the audience. Therefore it does not represent the views of Lady Tonge or the other speakers on the panel nor the PRC which organised the event.

The organisation also points out, in a call with LBC radio, that media outlets have failed to ask it for comment. A media spokesperson for the organisation called into the radio station to have their voice heard.

The matter should have perhaps ended there, but pressure mounted for Tonge’s firing. She has long been criticised for her sympathies with Palestinian causes. And it seems the right-wing media is keen to ride the coat tails of what they think they can spin as antisemitism, and dig out a near-decade-old picture to pass as apparent news.

[Editor’s note: the author of this post has carried out freelance work for the PRC in the past.]

– Find out more about the Palestinian right of return.

– Read more articles from The Canary about the right-wing media’s smear campaign.