Jeremy Paxman finally gets to say what he thinks of David Cameron and Brexit... and it's not pretty [VIDEO] - Canary 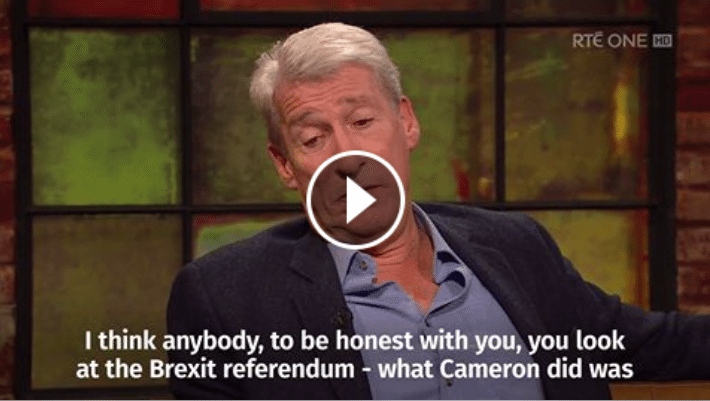 Former BBC Newsnight host Jeremy Paxman has revealed his true feelings about David Cameron and Brexit – and they’re not pretty.

Speaking on The Late Late Show on RTÉ One, Paxman gave a frank account of his views on the former Conservative Prime Minister:

I’m not a great fan of Cameron, actually, if you really want to know. I think he probably knew that.

He put the whole question of the nation’s identity up for grabs, and then didn’t even bother to make the case for staying in Europe.

So I think he’s got quite a lot on his conscience. I think he’s been a pretty terrible prime minister, actually.

To be fair, David Cameron’s legacy will include the passing of equal marriage legislation in the face of a Tory rebellion.

But his legacy will also include an increase in poverty which required food banks to provide more than a million food parcels to feed the hungry last year. It will include the replacement of permanent jobs with a million zero hours contracts. It will include the 10,600 sick and disabled people who died within six weeks of their Atos work capability assessment – in 2010/2011 alone. And it will include Brexit – a reckless gamble between David Cameron and Boris Johnson which both managed to lose.

In short, he was indeed a ‘pretty terrible prime minister’.