Michael Moore sends a hair-raising message to the US just before the elections, and it's gone viral [VIDEO] - Canary 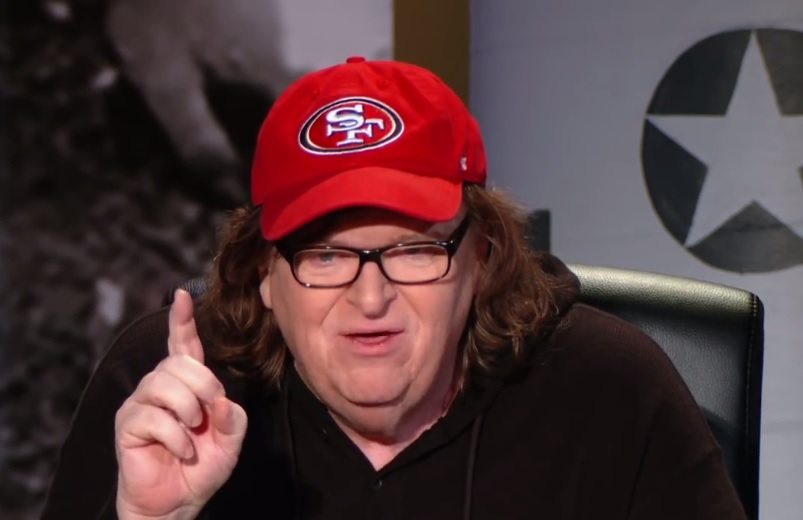 Since its release, one five-minute clip from the movie has gone viral. And for very good reason.

US voters will go to the polling booth on 8 November to decide who their new president will be. Ahead of that vote, Moore travelled to Wilmington, Ohio to film TrumpLand. While 25,000 voters are registered in Clinton County, where Wilmington is situated, only 500 are registered as Democrats.

During the show, Moore spoke about the Trump supporters he knew in his home state of Michigan. And he had written a short speech about a potential Trump victory based on his understanding of them. He began:

Donald Trump came to the Detroit Economic Club and stood there in front of a Ford Motor Executive and said: ‘if you close these factories, as you’re planning to do in Detroit, and build them in Mexico, I’m gonna put a 35% tariff on those cars when you send them back and nobody’s gonna buy them.’

It was an amazing thing to see. No politician, Republican or Democrat, had ever said anything like that to these executives. And it was music to the ears of people in Michigan and Ohio, and Pennsylvania and Wisconsin – the ‘Brexit’ states.

Moore’s reference to Brexit is pertinent. The UK’s decision to leave the EU sent shockwaves around the world because no one believed the country would actually vote for it. That was evident in the complete lack of any coherent Brexit plan from either campaign – Leave or Remain – once the result came in.

But those in charge had underestimated how taxing austerity was on the population. And how tired people were of the bureaucrats at the top arranging the world for their own benefit. Brexit was a stark message to the ‘establishment’ that it should not ignore the people.

Moore detailed a similar danger in the US, and how it could trigger a Trump victory. He continued:

Whether Trump means it or not is kind of irrelevant, because he’s saying the things to people who are hurting. And it’s why every beaten down, nameless, forgotten working stiff who used to be part of what was called the middle class loves Trump.

He is the human molotov cocktail that they have been waiting for. The human hand grenade that they can legally throw into the system that stole their lives from them.

And on November 8, election day, although they lost their jobs; although they’ve been forclosed on by the bank; next came the divorce and now the wife and kids are gone, the car’s been repo’d; they haven’t had a real vacation in years; they’re stuck with the sh*tty Obama Care Bronze Plan when you can’t even get a f*cking Percocet; they’ve essentially lost everything they had except one thing – the one thing that doesn’t cost them a cent and is guaranteed to them by the American Constitution. The right to vote.

Will US citizens flick the switch?

Moore concluded that a victory for Trump would “feel good” for those who voted him in. But perhaps not for long. He explained:

So when the rightfully angry people of Ohio and Michigan, and Pennsylvania and Wisconsin, find out after a few months in office that President Trump wasn’t going to do a damn thing for them, it’ll be too late to do anything about it.

WikiLeaks founder Julian Assange has claimed that the choice for president is not up to the American people at all. In the Ecuadorian Embassy in London where he’s been illegally trapped by UK authorities since 2012, he spoke to investigative journalist John Pilger about the US election. He said:

My analysis is that Trump would not be permitted to win. Why do I say that? Because he’s had every establishment off-side. Trump doesn’t have one establishment, maybe with the exception of the evangelicals… but banks, intelligence, arms companies, foreign money etc. is all united behind Hillary Clinton. And the media as well.

Pilger himself recently came to a similar conclusion:

Maybe they are right, and the establishment opposition to Trump will ensure he won’t be ‘permitted‘ to win. But Moore paints a picture of immense public anger in the US. And that will affect voters in the ballot box. Yet exactly how that anger will manifest will not be clear until 9 November.

What is certain is that the US has given its citizens a limited and bitter choice. How they will level with that will decide America’s future.

And, of course, the future of the world at large.

– Read more Canary articles on the US presidential election.

– Understand what the US could have had by watching Bernie Sanders and Jill Stein.