The disgraceful truth about John Lewis that the mainstream media is ignoring [IMAGES, VIDEO] - Canary 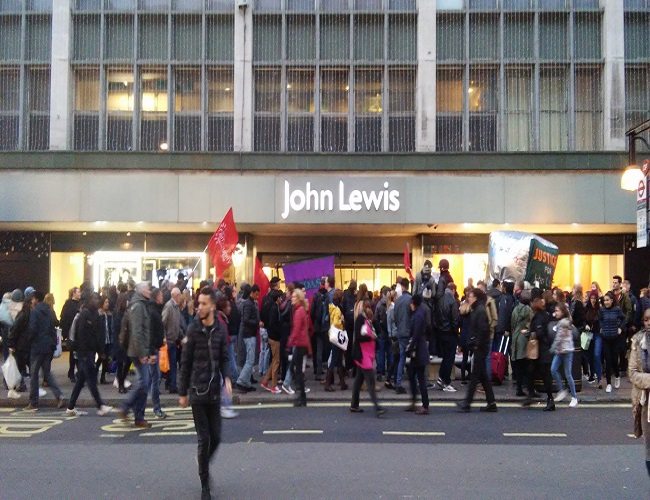 The retail giant John Lewis has come under heavy criticism for the treatment of some of its workers. United Voices of the World Union (UVW) say the retailer is ‘denigrating’ its cleaning staff and treating them like ‘second class citizens’ compared to regular employees. But while this is going on, the mainstream media are choosing to focus on John Lewis’ Christmas advert – not its treatment of its workers.

John Lewis outsources the contract for cleaning to Compass Group. The company pays over 3,000 of them a mere £7.35 an hour. John Lewis’ regular staff get £8.20. The cleaners get £7.35 even if they work in London, where the recommended Living Wage is £9.75. And they have no access to the company’s famous ‘partnership’ model nor the annual bonus. UVW claims that:

Every year in store the annual bonus is publicly announced. This means the cleaners are forced to watch everyone celebrate and then sweep up the confetti and mop up the spilt champagne as a cruel reminder of their second class status within John Lewis.

The retailer’s profits for the six months to July 2016 were £81.9m, a fall of over 14%. But John Lewis has still managed to increase the pay of its workers by around £33m. At the same time, the cleaners only saw a pay increase of 6p per hour. UVW have been campaigning for the cleaners to receive “parity of pay and terms and conditions of employment with in-house staff”. It demanded that John Lewis respond to what it called “reasonable demands” by 1 November.

But the retailer failed to acknowledge the issue. So, on Saturday 5 November UVW held a demonstration outside John Lewis’ flagship store on Oxford Street. The cleaners, UVW members and supporters demonstrated outside the store for over two hours: 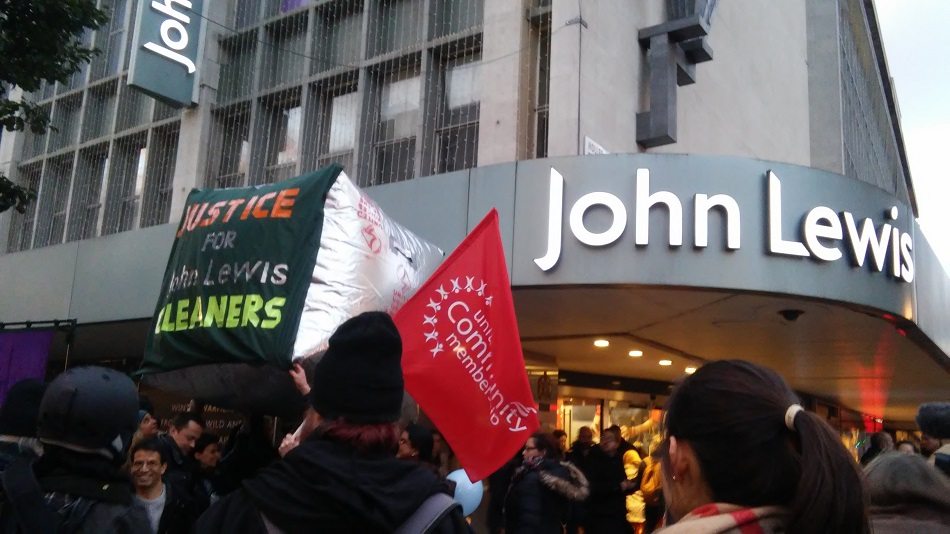 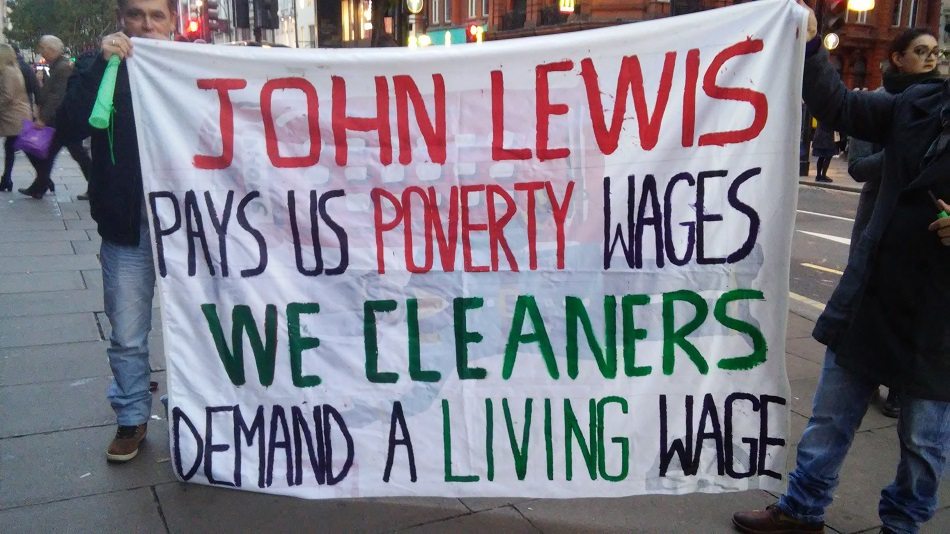 The organisers branded John Lewis a “sham” for operating a two-tier system regarding its staff. They said that the protest marked a clear statement of intent to embark on a sustained and robust campaign. The protesters surrounded the entrances to the store, stopping shoppers from entering. They also brought traffic to a standstill along Oxford Street on several occasions as they blockaded the road on both sides: 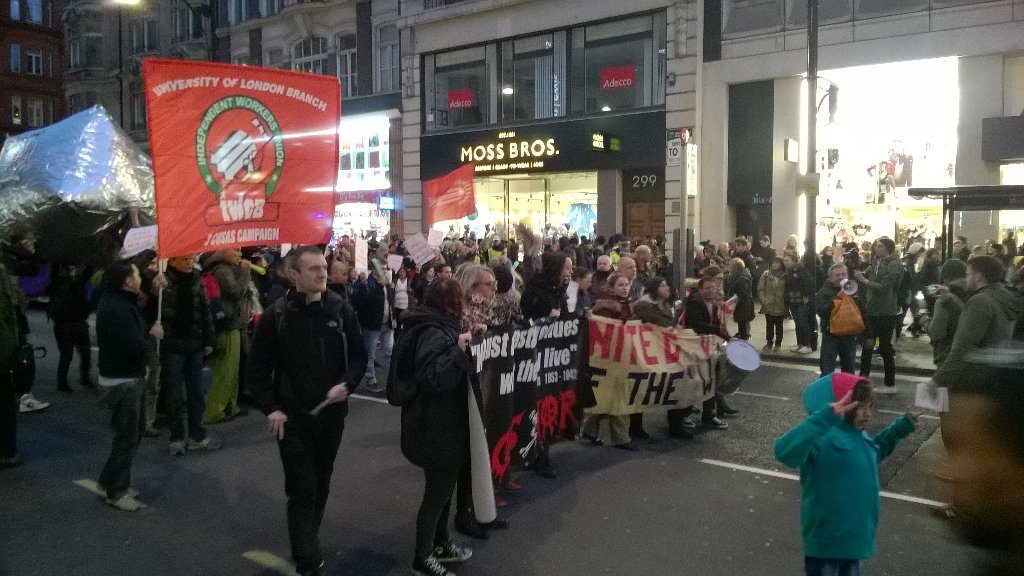 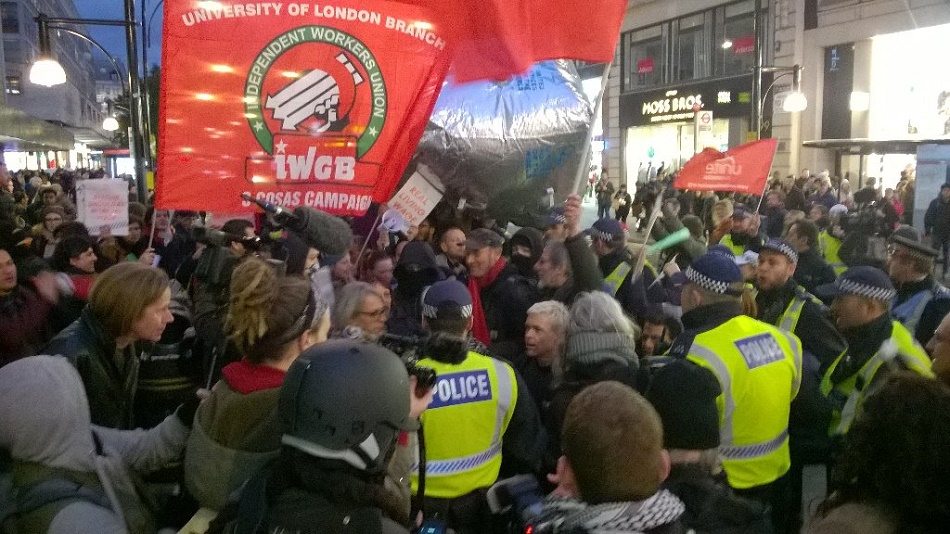 The police were out in force, with around 30 officers present at one point. But campaigners said the presence was disproportionate, as the protest was peaceful with only around 40 people, including children, in attendance. Passers-by gave their support to the demonstration. Disabled People Against Cuts (DPAC), the National Shop Stewards Network (NSSN) and Class War also attended the protest. And the UVW action had a noticeable effect. Protesters blocked the entrances to the store, and traffic on Oxford Street was stopped for around 20 minutes.

No representative from John Lewis would come out to speak to UVW on 5 November. The Canary contacted the retailer for a statement, but no one was available for comment.

UVW says that “the dignity and respect of the John Lewis cleaners is non-negotiable”. But it would seem that the retailer does not echo this sentiment. And the press are only interested in John Lewis’ latest Christmas advert. So, the UVW and its supporters will continue to raise the issue of John Lewis and its creation of a group of ‘second class citizens’ until the cleaners get equality and justice.

– Contact John Lewis, telling them to review the cleaning contract.