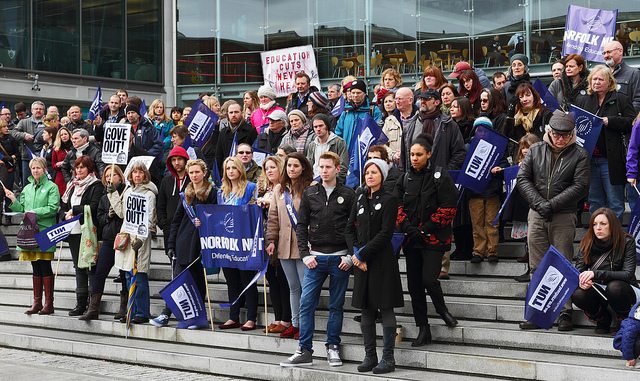 Students and teachers are fighting back against the Conservative government’s attacks on education in the best way possible. They are uniting on Saturday 19 November for a mass protest in London. And with thousands expected to attend, the message to the government couldn’t be clearer. Students and teachers will no longer be ignored.

The National Union of Students (NUS) and the University and College Union (UCU) have organised the United for Education protest. They say they’re demonstrating because the Conservatives are waging a “war” on students and education.

The NUS and UCU say that the government is attacking the education system in various ways:

“Colleges have been cut to the core, with huge job losses and course closures”

The government cut Further Education (FE) budgets by 14% between 2010-15. Since 2010, every college has made an average of 105 staff members redundant. And the government is scrapping nearly 20,000 courses. The government has slashed the adult education budget by 40% since 2010. Critics say the cuts will mean the loss of up to 190,000 student places. And the overall number of student applications has fallen in recent years.

England already has the highest tuition fees in the developed world. And with total student loan debt rising (paywall) by 17% to £82.6bn last year, students leave education with, on average, £44,000 of debt. But around 73% of students will never pay off all of their debt, and much of this debt is now privatised.

“The government is forcing universities to run like businesses”

The government has proposed various reforms to the higher education system. These include a new framework to measure teaching quality; changes to the higher education regulator; and adjustments to the system which would allow financially unviable universities to fail, or be bought. Critics argue (paywall) that the Tories are making university education into a competitive, market-driven system. The Tory reforms will allow for-profit companies to run universities, which will effectively put profit at the heart of education.

“This has to stop”

The NUS and UCU say:

The government has ignored students and staff for too long. This has to stop. Students: let’s march in our thousands and show the government we will not be ignored. Alongside our staff, we have the power to halt cuts and stop fees rising even more. Together we are a force too large to ignore.

The march assembles at Park Lane at midday and begins at 1pm. This is followed by a rally at Millbank, Westminster at 2.45pm. Speakers include Malia Bouattia, President of the NUS; Sally Hunt, General Secretary of the UCU; and Angela Rayner MP, Shadow Secretary of State for Education. The NUS and UCU say “We’re united for education”. And with the government’s relentless drive for austerity, unity within the education sector has never been more important.

– Read full details of the United for Education march.

– Support the protest on Saturday using the hashtag #Nov19.

– Write to your MP to ask them to ensure teachers receive the funding, respect, training, and freedom that they (and Britain’s students) deserve.