After years of fighting, the names of undercover cops are finally revealed - Canary 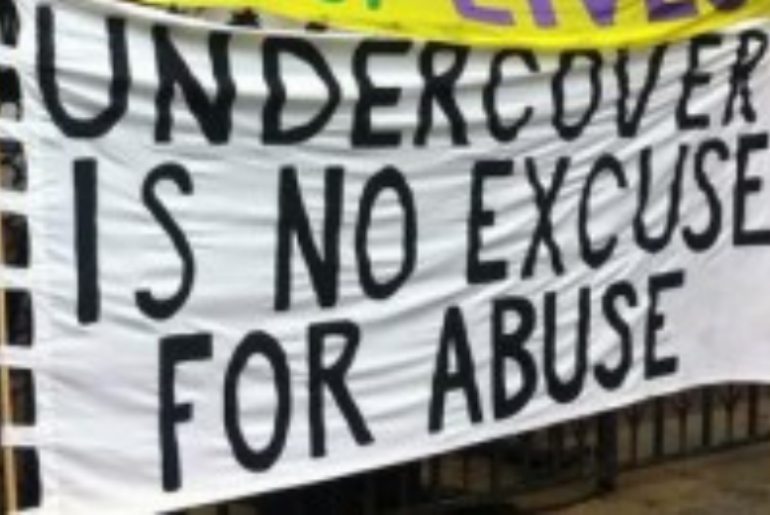 Research from activists and journalists uncovered 17 undercover officers who spied on protesters and social justice campaigners with both the Special Demonstration Squad (SDS) and the National Public Order Intelligence Unit (NPOIU). And this is just the tip of the iceberg, as research shows there were at least 150 officers since 1968.

But even when there have been huge amounts of evidence that an officer was an undercover one, the police still refused to confirm or deny their existence. The Metropolitan Police claim that revealing the cover names will put officers at risk. But according to the Campaign Opposing Police Surveillance:

In the six years of exposure, including some of them being public and locatable, the worst harassment any has suffered is some polite leafleting outside a building Bob Lambert works in, which took place every few weeks on days when he wasn’t there.

But despite years of court cases, and the police refusing to identify him, the inquiry released a statement on 10 November, saying:

The inquiry has received confirmation that no restriction is sought over the undercover identity used by the police officer core participant known as N519, which was ‘Marco Jacobs’.

The same wording was used to release the name of Neri on 17 November. Neri infiltrated socialist and anti-racist groups in the early 2000s. He was exposed at the beginning of the year. A woman, known as Andrea, had a two-year relationship with Neri. She described what happened as “psychological torture”.

But as Dave Nellist, Chair of the Trade Union and Socialist Coalition, said in a press release for the Socialist Party, there is still a lot further to go:

As the revelations of police spying have mounted the government has been forced to respond by setting up the Pitchford Inquiry to investigate police spying. This is welcome, but not enough. Lord Pitchford’s inquiry will need to get behind the attempts that will be made to disguise the reality of what has taken place.

And he says that there is a need to look at what the police are still doing:

We do not accept that infiltration, as the Metropolitan Police have implied, is a thing of the past. Surveillance of peaceful protesters has increased dramatically in the recent period. We demand to know what today’s ‘Carlo Neris’ are doing.

Tom Fowler, meanwhile, who is pursuing a case against the Metropolitan and South Wales police forces for their use of undercover officers and is a ‘core participant’ in the inquiry, told The Canary:

It’s very welcome that the undercover policing inquiry has done what the Met Police have refused to do for over 5 years, and name Marco as the cop we already knew he was. Hopefully, this will just be the start of the confirmation of cover names by the inquiry. There are only around 145 left to be named.

After years of fighting, these names are being drip-fed into the public domain and confirmed. And while it is to be welcomed that some are finally being revealed, the process is agonising for those affected. While we know, and have gathered evidence and information that have put these officers into the public domain, it is very different seeing it in black and white, on an inquiry website.

And as previously reported by The Canary, this is particularly relevant for the relatives of children who have had their identities stolen. Currently, the inquiry is asking potential relatives to come forward, but has also said it may not confirm whether or not their child’s identity was used.

The inquiry is already set to last much longer than the anticipated 2018 end date, and has already received over 320,000 documents. The priority must be for the inquiry to release all the cover names. This is the only way the inquiry can truly investigate what these officers and their units have done. And it is the only way that those of us who have been spied on, or who have had identities stolen, can learn what happened and why it happened.

The author is a core participant in the undercover policing inquiry.

This post was updated at 1325 on 18 November to add a quote from Tom Fowler.