Mhairi Black proves she's one of our best MPs, with this blistering attack on the government [VIDEO] - Canary 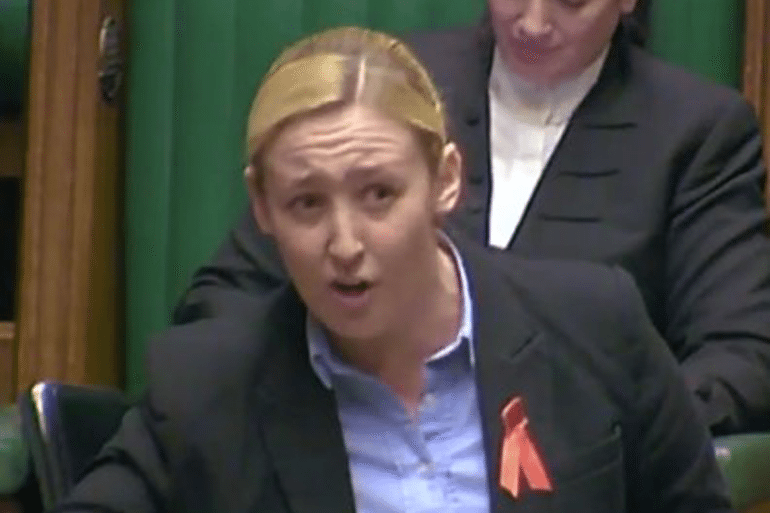 The Canary has previously reported that parliament is debating the reforms of state pensions for women born in the 1950s. Women Against State Pension Inequality (WASPI) is the campaign against the government’s pension reforms. And Black has been a long-time supporter of the campaign.

The 1995 Conservative government’s Pension Act included plans to increase women’s state pension age to 65, the same as men’s. But the government did not contact the women affected until 2009, 14 years later. At first, the government planned to slowly phase the reforms in. But in 2011, the then Chancellor George Osborne decided to speed up the process by several years.

Hundreds of thousands of women born in the 1950s (on or after 6 April 1951) have suddenly seen their retirement age rocket by up to six years as a result of the way the reforms have been brought in. And the women affected have had little or no time to make plans to finance the additional years without a pension.

Black was taking part in a debate tabled by the SNP. The party had put forward a motion, asking the government to work with campaigners to “explore transitional protection” for the WASPI women. The SNP commissioned a report into the WASPI issue, and its motion was based on this. Black said in parliament that:

We have debated this issue five times… I tried to give the government the benefit of the doubt. But it is truly an embarrassment to this House that we are still waiting on a government plan for making this better.

She laid into the government, which had referred to pensions as a “benefit”, saying it was an “utterly pathetic response”. Black is calling on the government to financially support the women affected by the pension reforms, some of whom had paid in up to 50 years of National Insurance contributions.

When the Secretary of State for the Department for Work and Pensions, Damian Green, talked over her, she quickly silenced him with “I suggest he listens”. She also reminded Conservative MP Graham Evans, who criticised the WASPI campaign in a speech, that his majority in Weaver Vale was only 806. And that this majority probably “consists of a lot of WASPI women who will remember his speech at the next election”.

Black slammed the government’s plans as “absolutely shambolic”, saying that “no amount of sympathy and flowery words” from Tory MPs “is going to pay bills for people”. The SNP proposed that it would cost £8bn over five years to financially support all the WASPI women affected. Black said of the government’s dismissal of this proposal:

I have lambasted the government for choosing to bomb Syria instead of paying pensions… for spending billions on Trident. I have had a go at them for doing up [parliament] for £7bn, which funnily enough we can afford. We can now also afford to pay up for the Queen’s house; we can now find the money to refurbish Buckingham Palace.

So my question to the [Tories] would be this: are we going to be doing up Downing Street anytime soon? Are there any other houses filled with millionaires that need a lick of paint? It is a ridiculous notion that we can afford to fork out money for palaces… but we cannae pay pensions. It is a joke.

Austerity from the Tories, yet again

We are disappointed but not surprised at today’s vote. How can the government claim that a system is “fair” where a women born in May 1953 now has her pension, but a women born one year later must wait until January 2020? A fair solution will cost money, but how a government spends funds is a matter of political choice. We urge the Pensions Minister to meet with us to seek a way forward that will help our members and supporters.

Black essentially said in her speech that the WASPI issue was another example of austerity hitting the poorest the hardest. The government is financially abandoning a whole generation of women. But as Black said, the government’s actions may hit it at the ballot box, saying, “as my WASPI mother would say, hell slap it intae ye at the next election”. And if the WASPI women have their way, the government won’t know what’s hit it.

Two debates in two weeks and still the Government refuse to act. The #WASPI issue is not going away. pic.twitter.com/Y5WszlSXDs

– Support The Canary so we can keep holding power to account.