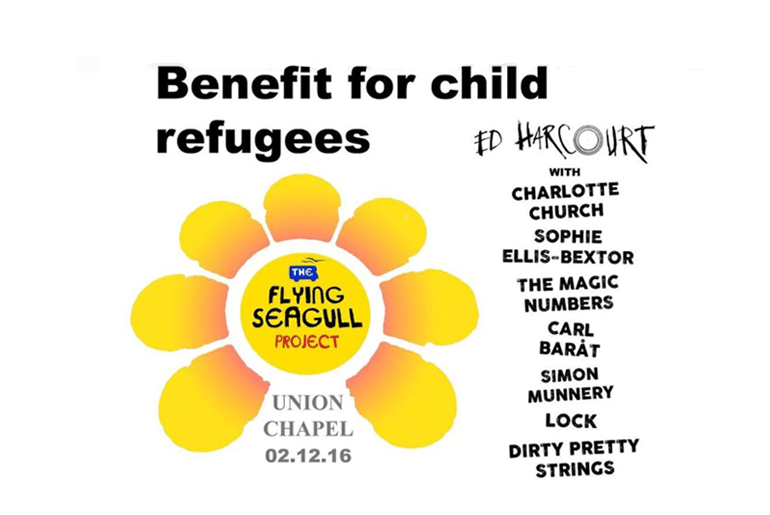 On Friday 2 December 2016, the iconic Union Chapel in Islington, North London, will host a music event to raise money for child refugees fleeing atrocities in the Middle East.

Can't wait to perform at this…..get your tickets guys and support a truly brilliant cause.😍😍😍😍😍 https://t.co/Cwtqp2p8WU

The Canary is proud to be supporting the benefit. Partnered with children’s charity The Flying Seagull Project, which organised the event, we will be streaming the concert live between 19.15 and 22.30 GMT from our social media pages at facebook.com/TheCanarySays and twitter.com/TheCanarySays.

The Flying Seagull Project brings happiness to children who are underprivileged, marginalised, or suffering. It runs art workshops, music lessons, and circus shows in hospitals, orphanages, deaf and blind schools, and also in refugee camps.

We only came up with the idea for this gig a few weeks ago and it is getting bigger every day. Thanks to the generosity of live filming experts BeatCast, this fantastic link-up with The Canary, and the wonder of Facebook and Twitter, we are now bringing it to a much wider audience, including kids out in the refugee camps. Get involved using the hashtag #HappinessMatters.

The Flying Seagull Project is a small charity that is making a huge impact. We are proud to support their work, offering children in desperate situations a chance to feel real joy. This star-studded benefit concert promises to be a truly amazing event – both live and online.

The Canary spoke to singer/song-writer and Mercury Prize nominee Ed Harcourt and asked him what inspired him to support the The Flying Seagull Project. He said:

We have become used to the plight of refugees fleeing their countries and their terrible situations – everyone is aware of what is going on. It’s just how you react to it, whether you’re able to dredge up some empathy and compassion. If you’re a parent and you see these children, and what’s happened to them – children who’ve lost loved ones, some of them orphaned, some deserted, all stranded in these squalid camps. For them to have some semblance of joy and happiness should not be a luxury. There aren’t many charities that physically go out there and do something for the mental well-being and state of mind of the children.

Harcourt also spoke about how he sees recent global events:

There seems to have been a surge of far-right nationalism happening across the world, and I think we’re in grave danger of becoming too detached. We seem to be losing our sense of empathy, becoming desensitised. It’s easy to fall into the trap of saying, ‘well, you know, what about our country… what about our problems?’ But at the end of the day, we’re all human. It’s important to try and look out for one another. That should be inherent in human nature.

And with the UK’s media peddling a climate of hate, Harcourt says the independent media have a vital role to play:

They are important. Really, really important. It would be wrong if no one said anything. It’s important to stand up to it, and protest is a very healthy thing. I do think there is a serious problem with media and with the news outlets, in the way they influence peoples’ opinions. On a massive scale. Especially in the right-wing papers, there’s a lot of propaganda – and a lot of the time, it’s just outright lying. These papers – they’re kind of like a big bully in the playground.

You can watch more from Ed Harcourt is his video appeal:

The concert will be a star-studded evening of live music and entertainment. We look forward to seeing you at 7.15pm on Facebook or Twitter.

– Tickets may still be available. If you would like to come along and support the event, check for availability here.

– Become a supporter of The Flying Seagull Project.