Someone's decided to crowdfund for the Queen, and it's not going very well - Canary 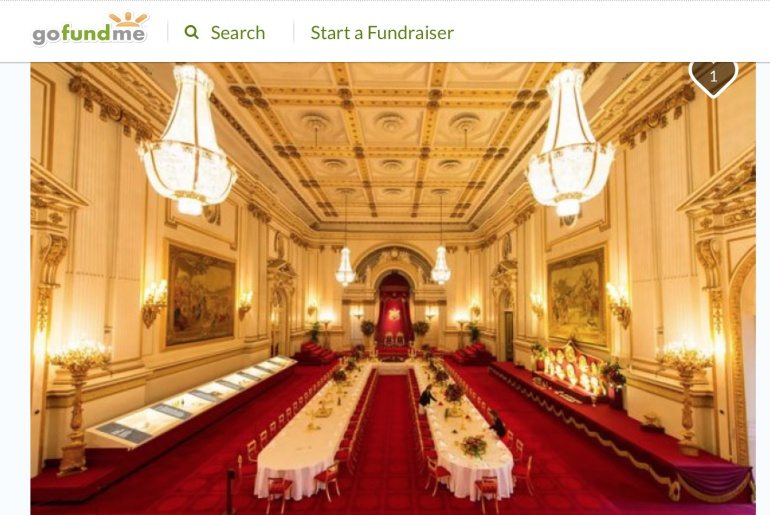 A crowdfunding campaign has been launched to help the Queen pay for the renovations at Buckingham Palace. But despite being launched 16 days ago, and being shared 2,600 times, not a single penny has been raised.

While steps should be taken to maintain and restore such buildings, I’m sure many will find it hard to grasp the millions available to restore Buckingham Palace when Tory cuts are leaving the poorest in our society to suffer.

So it was with this in mind that a crowdfunding campaign was started. According to the fundraising page:

As you may be aware, the palace is in somewhat of a sorry state of disrepair, the current encumbents [sic] have let the place go.

£370,000,000 million [sic] will be spent on bringing a national treasure back to splendor for the 21st century. By crowdsourcing, the people that are willing to pay will support the endeavour, and the tax purse can support true public will by way of Trident, HS2 and homelessness.

Despite not a single person donating, 80 people have left comments, none of which are supportive.

Some pointed out the fact that we’re funding the Queen at a time when children are homeless:

The work may need doing but she is 90 years old and worth half a billion. A million people are using food banks, we have tens of thousands of homeless children. Baby Unit services are being severely cut back. It is morally reprehensible for the public to pay for this. In the vernacular, it’s f**king robbery. I will fight this all the way.

Several others opted for funding options that would mean the end of the monarchy:

I will donate towards a guillotine instead???

While some people treated the initiative in the spirit it was presumably created:

Well done whoever created this, best laugh I’ve had all weekend !!!!!

Whether it is this £369m for Buckingham Palace or £7.6m to repair Europe’s largest privately owned stately home, there are serious issues with the government’s spending priorities.

According to Shelter, 120,000 children will be homeless or in temporary accommodation this Christmas. And it should make us all so angry that the government is willing to spend money on the houses of the wealthiest while children are suffering.

– Join the fight against austerity!