After a week of rail chaos, the Transport Secretary gets an early Christmas present from commuters [TWEETS] - The Canary 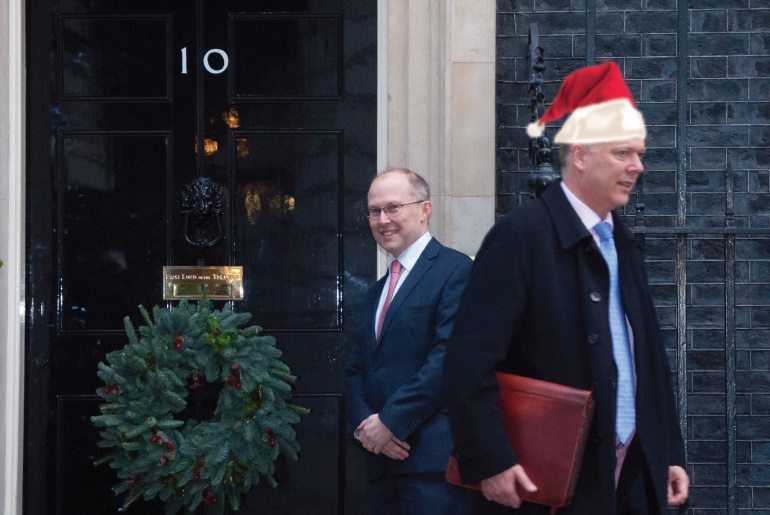 With the chaos on beleaguered Southern Rail continuing, angry commuters voiced their dissatisfaction with Transport Secretary Chris Grayling. On Thursday 15 December, passengers blockaded Victoria station in London, and then marched on the Department for Transport. And the loudest message they sent to Grayling may not be the early Christmas present he was hoping for: “resign!”

On Tuesday 13 December, the Associated Society of Locomotive Engineers and Firemen (ASLEF) Union began three days of industrial action against Southern Rail. The dispute is over Southern Rail’s plans to make driver-only operation (DOO) trains the standard across its network. This, trade unions claim, would compromise passenger safety.

As The Canary previously reported, DOO trains would see the scrapping of guards across nearly all Southern Rail services in Surrey and Sussex. This could mean the loss of 400 guards on trains. Also, disabled passengers would have to book support 48 hours in advance to get on and off trains. And the National Union of Rail, Maritime and Transport Workers (RMT), Disabled People Against Cuts (DPAC), and the Association of British Commuters (ABC) say this would be breaking the law. The groups claim it is in breach of the Equality Act 2010.

The strike action by ASLEF has caused chaos on Southern Rail routes. Also, to further add to the mess, it was announced on Thursday that talks between the union and the government had ended without an agreement being reached.

And it seems that some commuters are supporting the ASLEF strike:

it's almost like they have some sort of ideological commitment to privatisation. All support to the unions #southernstrike

Just canceled a business trip because of #SouthernStrike today. Up the workers! I can do it next week, no biggie. #Satefy and #People first

Even fierce critic of the union’s actions, LBC radio host Nick Ferrari, appeared to be converted after hearing the testimony of a train conductor.

But the ABC has always supported both the RMT and ASLEF in their actions. The protest on Thursday was to demonstrate passengers’ frustration at both Southern Rail and Grayling. And the ABC also delivered three demands to the Transport Secretary:

The ABC also said that if Grayling will not accept accountability for the crisis, it believes he should immediately resign. As well as this demand, the commuters also gave Grayling another early Christmas present. A model train set:

Commuters now trying to present Chris Grayling with a train set as a present – it has no guards! pic.twitter.com/8Y7PW5iGch

Grayling: running out of track?

In a statement, the ABC said:

The protest urge[d] the honourable engagement of the government in the dispute at a time when we are suffering the complete shutdown of travel in the south. Most disturbing of all are the reasons behind the unprecedented level of industrial action… we demand that the Secretary of State for Transport not only intervenes, but does so openly and transparently.

Grayling is looking more and more embattled as the chaos on Southern Rail drags on. But the issue of DOO trains is not just a problem on the Southern Rail franchise. Rail North also has plans to introduce DOO across their network. As does Abellio ScotRail. The crisis, however, and passengers’ and workers’ fury, runs deeper than this. With ticket prices set to go up by 1.9% in England, Scotland and Wales from January 2017, privatised train services are looking increasingly rocky. Grayling may have had an early Christmas present from commuters, in the form of the call for him to go. But will he send a gift in return, and actually resign?