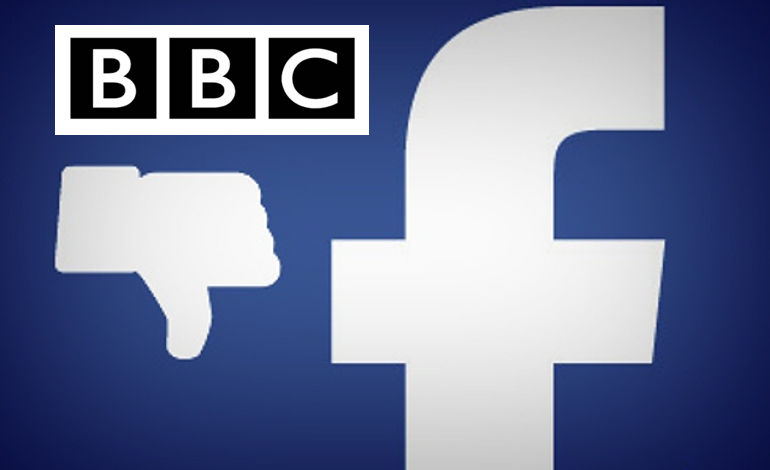 The BBC last week announced plans to make permanent its ‘Reality Check’ team, aimed at debunking news stories that were misleading the public. Currently, the programme examines political statements to check if the facts add up to what they claim. Such as: Are one third of NHS beds really being cut? Or: Is inequality in the UK actually rising? Now, they will take on ‘fake news’ with Facebook. But some believe the implications for this are deeply worrying.

The BBC can’t edit the internet, but we won’t stand aside either.

We are working with Facebook, in particular, to see how we can be most effective. Where we see deliberately misleading stories masquerading as news, we’ll publish a Reality Check that says so.

The plans come after quite a media frenzy around ‘fake news’. False information around ground-breaking events in 2016, such as Brexit and Trump’s election, has caused concern. And media outlets are weighing in from every direction. The trouble is that some are quick to use the term ‘fake news’ when information is presented which doesn’t quite fit the wanted narrative. And some commentators are concerned that the BBC might be using the issue to instil a one-sided agenda by taking control of the narrative.

Jonathan Cook is one such commentator. In response to the news story, Cook, a respected independent journalist who used to write for The Guardian, posted on his Facebook page: 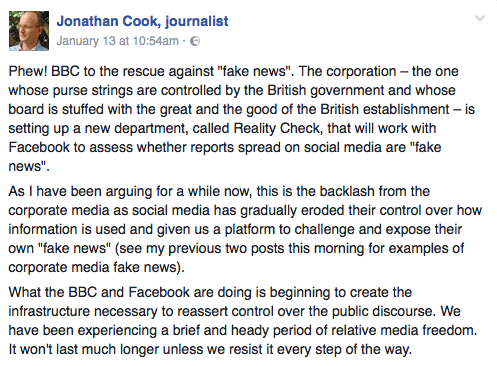 Cook points out the problem around the BBC‘s government funding and its inability to adequately hold those in power to account. Despite the strides made in countering this bias through social media, the BBC (along with Facebook) will “create the infrastructure necessary to reassert control over the public discourse”.

Is the BBC the guardian of truth?

The BBC is careful in what it reports. But it’s the lack of analysis that aids the government spin. Many think the BBC’s news content is reportage straight from Westminster, or have accused it of ‘blind reporting’.

In addition, commentators have acknowledged a distinct move to the right within the senior ranks of the BBC. James Harding himself is a former editor of The Times, a right-wing broadsheet owned by Rupert Murdoch. As The Canary has previously reported, such appointments create institutional bias within the BBC.

There is also inherent bias in all news organisations. By nature, editors make decisions based on value judgments. There’s no reason to assume that the BBC is immune from this, or that it is therefore some kind of objective yardstick.

Is the period of relative media freedom gone?

The BBC won’t be targeting mainstream UK newspapers, but other stories shared on social media. This alone might ring alarm bells. Only this Christmas Eve was The Guardian pulled up for falsely reporting on WikiLeaks founder Julian Assange. And this was a story that was shared all over social media. As columnist Glenn Greenwald pointed out:

those who most flamboyantly denounce Fake News, and want Facebook and other tech giants to suppress content in the name of combating it, are often the most aggressive and self-serving perpetrators of it.

And while some denounce the use of emotive language to draw in readers on social networking sites, the BBC will rival such tactics themselves. Harding said:

And we want Reality Check to be more than a public service, we want it to be hugely popular. We will aim to use styles and formats – online, on TV and on radio – that ensure the facts are more fascinating and grabby than the falsehoods.

The crackdown seems to have begun already. A parliamentary inquiry will call in media giants Facebook, Google and Twitter to give evidence on the issue.

Many independent media outlets outside of the mainstream work hard to call the government and other institutions to account. These plans risk targeting news outlets that speak truth to power. No one wants to read false information, but we have existing media watchdogs. Let’s strengthen those, not the institutions that work to empower the powerful.