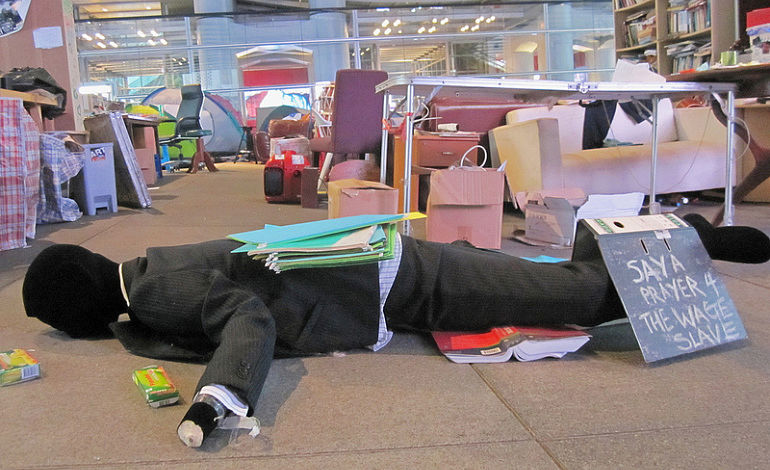 A proposal for universal basic income (UBI) is finally on the political agenda. If implemented, it will benefit millions of people who are in poverty or struggling to make ends meet. Unless, that is, you’re British. Why? Because of Brexit.

While MEPs urge European countries to consider introducing a basic income to prepare for mass unemployment (that could come as a result of the rise of robots), Britons will continue to live in a class-divided country, in which the poor are seen as a burden to be punished.

According to the Office of National Statistics, there are as many as 900,000 people on zero-hours contracts in Britain. Most are on the pathetic minimum wage. And it’s not just big companies (such as JD Sports, Amazon or Sports Direct) which are the guilty parties, but small, family-run businesses too.

Overall, an estimated 7.1 million people scrape by each week on temporary, casual, or zero-hours contracts, or are ‘self-employed’. In big warehouses and small warehouses. In factories and on farms. Care workers, fast-food workers, telesales and call centre workers, and workers in supermarkets (and shops generally). All exploited. All dehumanised.

This is the Zero Generation. Zero-hours contracts. Zero future. If Charles Dickens was alive today, you can bet he’d be writing about it. For many, there’s no chance of ever buying a house. Or going on a decent holiday. Or working in a job that provides fulfilment and meaning.

What is universal basic income?

The UBI would offer everyone, regardless of welfare benefits or earned income, a non-conditional flat-rate payment. Any income earned above that would be taxed progressively.

It would mean no signing on the dole. No welfare state. No benefits sanctions. And no need to work in jobs you don’t like.

The income would be just enough to live on: to pay rent, to eat, to buy clothes, and to pay bills. And if you need more, for ‘luxuries’, then you can top up the UBI and work in a chosen trade or profession.

Planning for the future

In February 2017, a report (tabled by MEP Mady Delvaux-Stehres) is to be put to the European Parliament. It will propose that EU member states adopt the UBI as part of the transition to a post-capitalist economy.

Over the next few years, changes in industry will see robots carrying out more and more menial tasks. And with the UBI, that will mean people will have the opportunity to work how they choose, or not.

No, this is not some socialist pipe dream. Politicians on the right will indeed argue against the UBI. But a poll by Dalia Research found that 64% of people across EU member states would vote for it.

Eventually, the UBI could be implemented in all EU countries. Indeed, some European countries have already begun. Earlier this month, Finland became the first country in Europe to pay unemployed citizens a basic monthly income in a pilot project. The Dutch city of Utrecht announced a UBI experiment, too.

In Scotland, local councils in Fife and Glasgow are intending to trial the UBI. At its 2016 spring conference, the Scottish National Party passed a motion supporting the idea. It said:

a basic or universal income can potentially provide a foundation to eradicate poverty, make work pay and ensure all our citizens can live in dignity.

The Canadian province of Prince Edward Island has opted to trial the UBI, too. According to a bill, positive effects of the UBI include:

And both mayors of Calgary and Edmonton have agreed to examine similar programs.

Since the Industrial Revolution, people’s lives have been defined by their need to earn money through work. For many people, that work is meaningless. But in a post-capitalist society, every human being should have the right to a home, to education and healthcare, as well as to work in whatever way they choose.

The Green Party backs the UBI. And Shadow Chancellor John McDonnell has said that the UBI is likely to appear in Labour’s manifesto for the next general election.

So there could be hopes for Britons, post-Brexit, yet. Particularly for those who live in Scotland.

– Demand that your trade union back the UBI.

– Join Citizens Income (which campaigns for a UBI).