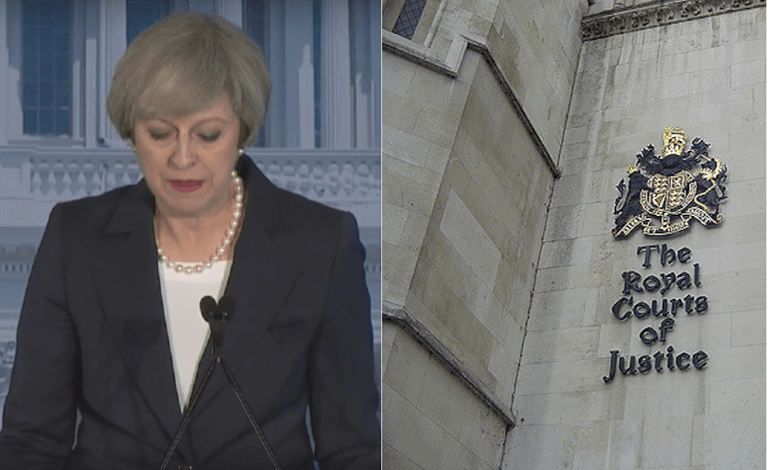 A landmark case has commenced in the High Court that will determine the future of the UK’s defence relationship with Saudi Arabia. It comes after a year-long battle by Theresa May’s government to hide exactly how abusive that relationship is.

Following a High Court decision in June 2016, Campaign Against Arms Trade (CAAT) has started a legal battle at the Royal Courts of Justice. The case, which is being heard over 7, 8 and 10 February, is against the Secretary of State for Business Innovation and Skills, responsible for granting export licences for weapons sales.

The hearing – a judicial review – will look at the government’s decision to continue arms sales to Saudi Arabia. Arms sales worth £3.3bn were granted to the country between April 2015 and March 2016. It comes after heavy scrutiny of Saudi Arabia’s intervention in the Yemeni civil war. Its intervention began in March 2015.

In fact, campaigners have long argued that the UK has breached international law by continuing these sales.

Back in December 2015, Amnesty International, which is submitting evidence in the hearing, commissioned a legal opinion. Lawyers concluded:

Any authorisation by the UK of the transfer of weapons and related items to Saudi Arabia… in circumstances where such weapons are capable of being used in the conflict in Yemen … would constitute a breach by the UK of its obligations under domestic, European and international law.

Amnesty said this confirmed there is a real risk that the misery in Yemen could be ‘Made in Britain’. Misery that has seen, by conservative measures, 82% of the population in crisis.

Both Amnesty and Human Rights Watch have uncovered evidence of the use of cluster munitions. The UK has outlawed these deadly and inhumane weapons, but Saudi Arabia is still using them. And it has admitted deploying UK supplies from a previous stockpile. Months later, the UK conceded that this could be the case.

The UK’s own arms sale rules state that export licences should not be granted if there is a “clear risk” the equipment may be used to break international humanitarian law (IHL). But the Foreign & Commonwealth Office (FCO) recently admitted that it does not even investigate individual incidents where IHL may have been violated. Instead it comes up with an “overall judgment” that they won’t be used for such violations.

Now, the court heard on 7 February that the head of the government’s Export Control Organisation (ECO), Edward Bell, advised former Business Secretary Sajid Javid against proceeding with the exports. The senior civil servant acknowledged the gaps in knowledge in Saudi operations and that they could not be certain that IHL violations had not taken place. Despite this, they refused to halt sales.

If the government’s arguments have not been convincing, it isn’t for want of trying. The UK government appears to have worked quite hard to protect its key ally, Saudi Arabia.

Last year, two committee reports – based on an inquiry by the Committee on Arms Export Controls (CAEC) – advised the government that it should immediately halt arms sales to Saudi Arabia.

A report by the Foreign Affairs Select Committee and a report by Committee on Business, Innovation and Skills said that there must be an independent investigation on whether violations of IHL had occurred before continuing sales, acknowledging the Saudis inadequate measures to investigate their own military conduct.

But recommendations from MPs on both sides of the political aisle heavily watered down the reports, playing down the existence of ‘evidence’.

The UK government refused to encourage an independent investigation until it saw what the Saudis come up with first.

It’s the Saudi war crimes investigation unit’s Joint Incident Assessment Team (JIAT) that investigates potential incidents. FCO documents reveal that the British military has provided JIAT with training. It was also reported that JIAT appointed a judge from Bahrain – another UK ally – himself accused of human rights abuses. This completely discredits the mechanism if it does not completely parody it.

One Bahrain human rights advocate laid out what this meant when he said:

With Mansour, the UK has trained a serial violator of human rights to investigate violations of humanitarian law. Mansour’s role in JIAT speaks to its absence of credibility as a body, and is an insult to his Bahraini victims and to the civilians of Yemen. The UK must end its support of white-washing mechanisms in the Gulf.

The UK’s alliance with Gulf countries doesn’t stop with Saudi Arabia. Bahrain comes under its political protectorate. And some have pointed out that it is still arming the UAE, part of the Saudi coalition which has 4,000 troops in Yemen.

These friendships have often come under the pretence of national security and have, of course, been buoyed by trade ties. But this hedonistic profiteering has reached new levels. And the UK has apparently been willing to turn a blind eye to devastating suffering for fear of losing a billion-dollar deal.

The government hasn’t acted alone. An absent media has coaxed it along. Often because, in the reality of war, media and freedom of expression are severely under threat. Nonetheless, Yemen is experiencing a war that has arguably suffered comparable but different depths to Syria. But it has lacked equal coverage.

Luckily, the lack of oversight has not lost the masses. A recent poll found 62% of the UK population believes we should not sell arms to the Saudis. Even Conservative MPs have spoken against their own party’s policies. Andrew Mitchell suggested the UK was ‘outsourcing foreign policy’ to Saudi Arabia. And Crispin Blunt said that if the judicial review did not find Britain’s policy in contention with the law, then the law itself should be changed.

The judicial review will conclude on 10 February and a judgment will come several weeks later. It could be a blow to the government to lose billions in weapon contracts. I’d like to say it will regain its moral compass. But the ‘whitewash’ that some say preceded this landmark case indicates the direction it will take the government. A direction we’ll certainly need to keep track of.

– Read more about the case and the legal document.