The BBC just tried to call out WikiLeaks. It did not end well. - Canary 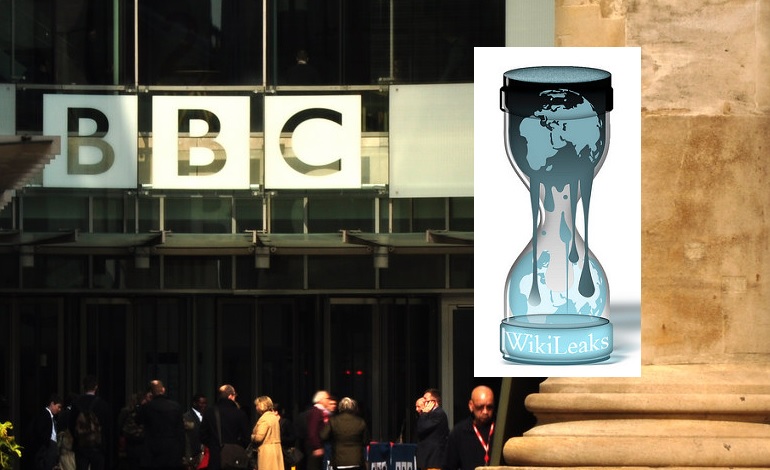 On 6 February, the BBC World Service broadcast its latest episode of The Inquiry. The segment was titled Can You Believe What You Read on WikiLeaks?

Since its airing, the BBC has faced criticism. Not only because it could easily ask the same question about itself. But also because it spends the entire episode indulging in the same practice it warns viewers against WikiLeaks for.

Start as you mean to go on

The Inquiry carries the tagline: “One pressing question from the news. Four expert witnesses. Challenging answers.” And in its WikiLeaks programme, presenter Ruth Alexander began:

It’s been reported in the last few days that WikiLeaks, the website that publishes classified information, has interesting material on the three main candidates in France’s upcoming presidential election.

A Russian newspaper headline says Julian Assange, the founder of WikiLeaks, is going to pour oil on the fire of the presidential campaign. Oh, we thought. This, again.

BBC journalist Nick Robinson had caused a stir over WikiLeaks‘ possible release of French presidential election material on 5 February. He had suggested that it was largely targeting one particular candidate:

Could be coincidence but funny how Julian Assange gets leaks of emails that hurt candidates who Moscow oppose. Now it's Macron's turn

But WikiLeaks denied that it had singled out the former Economy Minister Emmanuel Macron:

On The Inquiry, Alexander continued:

WikiLeaks caused a big shock last year when it leaked thousands of emails from inside Hillary Clinton’s party during the US election. Emails the US intelligence services say were hacked by Russians trying to interfere in the campaign.

It’s led some to question who WikiLeaks is really working for.

Alexander then interviewed the four “expert witnesses”. The first was Suelette Dreyfus, the co-author of a book with Assange. Ex-WikiLeaks volunteer Daniel Domscheit-Berg‘s interview followed. Then, Alexander spoke to journalist James Ball, who also worked with WikiLeaks. And finally, Foreign News Desk Editor at The Age Chris Zappone featured.

Of these four ‘experts’, three have had documented fall-outs with WikiLeaks and/or Assange. So while Dreyfus highlighted Assange’s “strong innate sense of the importance of justice”, Domscheit-Berg asserted that “sometimes there was basically no fact checking [of the leaked documents] at all apart a plausibility check”. Ball, meanwhile, cast Assange as a difficult person.

Yet Domscheit-Berg did say that WikiLeaks has “a very good record” for not making mistakes. And Ball acknowledged that Assange’s stated motivation in publishing “what he gets” is “transparency”. So even these largely hostile “experts” could not put WikiLeaks‘ authenticity – or ‘believability’ – in doubt.

Then Zappone spoke. The “obsessive” editor focused on WikiLeaks‘ Democratic National Committee (DNC) leaks. He detailed Russia’s alleged role in those leaks. And he attempted to show Assange’s links with that country:

He’s had a show on RT, so the Russian state-sponsored foreign language media network. He’s boasted of having a role in helping the former NSA contractor Edward Snowden find his way to Russia, and counselling Snowden to go to Russia.

In reality, Snowden ‘found his way’ to Russia because the US revoked his passport on route to South America. Without a passport, Snowden cannot leave the country.

But for the Kremlin, Zappone suggested, this Russia-linked founder’s site is the “perfect vehicle” for releasing anti-Western propaganda.

It takes one to know one

Yet this BBC programme was a prime example of what it purports to be warning against: propaganda. The views aired were predominantly anti-WikiLeaks or Assange, rather than a range of views. It contained inaccuracies and half truths. And it had ominous interludes where US officials branded WikiLeaks a serious danger that needs to be crushed.

Its overwhelming message was that even if you still trust the organisation – despite the programme’s evidence to the contrary – you can’t trust whoever puts the leaked information in WikiLeaks‘ “lap”. Because they may have an agenda.

It is, of course, credible to criticise WikiLeaks. And many people have done so. But the BBC criticised it for being a propaganda tool while using the propaganda model itself. A model, in fact, that it regularly uses to forward its own agenda.

And that thoroughly weakened its argument. Which is unfortunate for the BBC, if it believes in what it’s saying.

– Watch the full episode of The Inquiry here.