What will wannabe dictator Donald Trump do next? We know, because Theresa May already did it - Canary

The increasingly belligerent and authoritarian actions of the Trump White House are (rightly) spreading concern across the world. But if we want to know where the wannabe dictator is looking for tips, look no further than 10 Downing Street. Theresa May – as Home Secretary and Prime Minister – has pushed Britain way further down the road to authoritarianism than Trump has yet succeeded in doing in the US.

The Act received Royal Assent on 29 November 2016. And it made Britain the most advanced surveillance state in the democratic world. It gives the government unrestricted access to everyone’s personal information and internet browsing history.

Internet Service Providers must now store details of everything you do online for a year, and make it available to dozens of public agencies. This gives authorities unprecedented access to our online lives: our interests, our networks of friends, family and colleagues, our sexual interests, our religious and political views, our medical history, right down to the basic pattern of our daily life.

And as a recent Amnesty International report [pdf, p35] points out, the government ignored most criticisms and recommendations made about the bill:

This leaves the government and its agencies with the power to surveil almost everything citizens do online. And all without the need for a warrant or cause for suspicion. As NSA whistleblower Edward Snowden put it:

Donald Trump’s border wall with Mexico remains, at least for now, a flight of Trumpian fancy. But Theresa May has already built her Great Wall of Calais to keep refugees out of Britain. In fact, how the fiasco has remained so quiet is a testament to the blunt-toothed non-response of much of the UK press.

The wall is a four-metre-high, 1km-long concrete barrier – built to separate the ‘Calais Jungle’ refugee camp from passing freight lorries. It was designed to prevent desperate refugees making their way to Britain by leaping onto passing traffic. Britain funded the wall, at a cost of £2.3m to the taxpayer. The wall was completed last December, two months after authorities had driven refugees out of the camp and burned it to the ground.

As Matt Broomfield writes in a searing comment piece for The Independent:

A multi-million wall built to separate the Calais Jungle from passing trucks has finally been completed, two months after the camp was bulldozed and its thousands of refugee residents scattered around France.

The British-funded wall cost £2.3m. That’s more expensive than the modern, wood-shelter camp which houses 2,500 refugees in nearby Dunkirk, or enough to house and support nearly 300 Syrian refugees in Britain for a year.

Theresa May and the racist vans 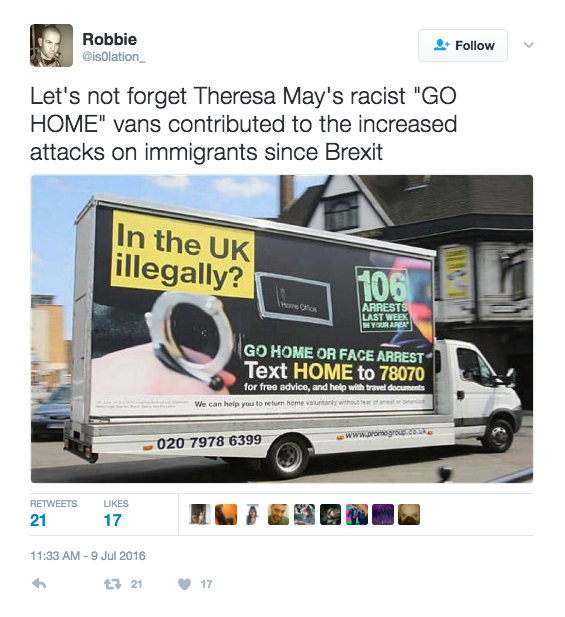 But it was as Home Secretary that Theresa May’s populist attacks on migrants and refugees hit a peak in 2013. May dispatched a fleet of ‘racist vans’ to the streets. The vans, pictured above, told immigrants to ‘go home or face arrest’, and provided numbers for suspicious citizens to dob in suspected immigrants/refugees.

After mass uproar at the Orwellian sight of vans trawling British streets, May was forced to apologise.

But she was undeterred. Later that same year, she sent officers from the UK Border Agency to several transport hubs in the South East, in an attempt to perform an anti-immigrant sweep. Non-white commuters, mostly UK citizens, were seized by officials demanding proof of citizenship.

The following account was reported to The Kilburn Times:

according to several witnesses the officers were aggressive, intimidating and were specifically targeting non-white individuals.

Kensal Rise resident Phil O’Shea told the Times he was threatened with arrest when he asked what was going on.

‘I thought the behaviour of the immigration officers was heavy-handed and frightening. They appeared to be stopping and questioning every non-white person, many of whom were clearly ordinary Kensal Green residents going to work.’

‘When I queried what was going on I was threatened with arrest for obstruction and was told to ‘crack on’.’

‘I asked that officer for his name but he refused to give it and said I could read his number on his shoulder but I couldn’t see a number there.’

Donald Trump and Theresa May are two peas in a pod

Anyone hoping for May to provide pro-democratic counsel to Trump has missed the rising authoritarianism on our own shores. May’s recent fawning visit to the US was not solely about hopes of a post-Brexit trade deal. The pair are also like two peas in a pod.

In delivery and in matters of personal conduct, the two are juxtaposed. But they share something far more important: a strong authoritarian streak, an inability to compromise and work within a team, and a hostility to progressive values.

If you want to know what Donald Trump is going to do next, just look at Britain. Because Theresa May already did it. And without a fraction of the opposition Trump is facing.

That should be a matter of concern for us all.

– Keep yourself informed by supporting and reading new media. Here are some outlets we trust. Please add any you would like to in the comments: