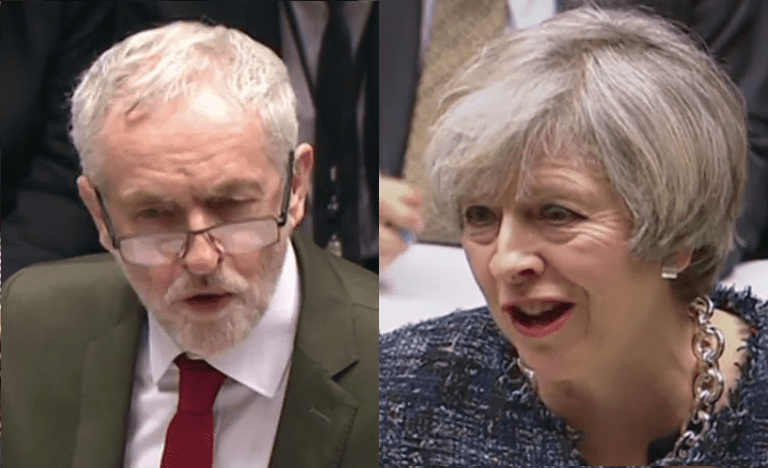 Jeremy Corbyn turned the entire media against Theresa May with his performance at Prime Minister’s Questions (PMQs) on 8 February. The Labour leader ambushed the Prime Minister with leaked messages suggesting that the government placated the Conservative-controlled Surrey Council with a special deal for adult social care. Corbyn noted that both Health Secretary Jeremy Hunt and Chancellor Phillip Hammond have constituencies in Surrey.

May was unable to provide any answers. Even The Sun backed Corbyn, saying May was “left doing her best fly catching impression”.

At PMQs, Corbyn read out leaked text messages on a “memorandum of understanding” between the government and Surrey Council. The leaked texts suggest the government offered Conservative Council Leader David Hodge extra cash to ‘kill off’ a referendum on a Surrey Council tax hike. The council originally floated a 15% increase in council tax to pay for its adult social care crisis. The tax hike would’ve embarrassed both Hammond and Hunt.

Hodge wrote that the “numbers” he received are acceptable enough for him to “call off the referendum”.

In the Commons, Corbyn demanded answers from the Prime Minister:

Will the government now publish this memorandum of understanding and, while they’re about it, will all councils be offered the same deal?

May was left floundering to the point where the entire mainstream media backed Corbyn.

Corbyn is so far winning #PMQs hands down with this text-ual analysis.
May sounding shifty.

The reaction swept across the media. The Editor of PoliticsHome tweeted: 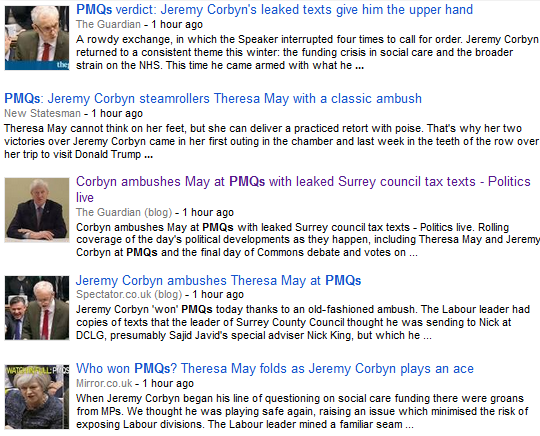 Meanwhile, Labour MPs rallied round Corbyn and took aim at the Prime Minister:

Answers needed to sweetheart deal that appears to have been given to Surrey Council. An exclusive deal or can other councils apply? #PMQs

Jeremy Hunts face went bright red when @jeremycorbyn read the texts between Surrey council and Gov,looks like they've been caught out #pmqs

After PMQs, May’s spokesperson denied that there was any “extra cash” for Surrey Council. But Number 10 did not say why Surrey Council suddenly dropped its referendum on the tax hike.

And the crisis goes far beyond Surrey. The Association of Directors of Adult Social Services has estimated that the Conservatives cut £4.6bn from social care budgets between 2010 and 2015. Councils drastically need more funding for social care across the UK.

With the help of leaked messages, Corbyn steamrollered May at PMQs on 8 February. Even The Sun took the p*ss out of the Prime Minister. And that says a lot.