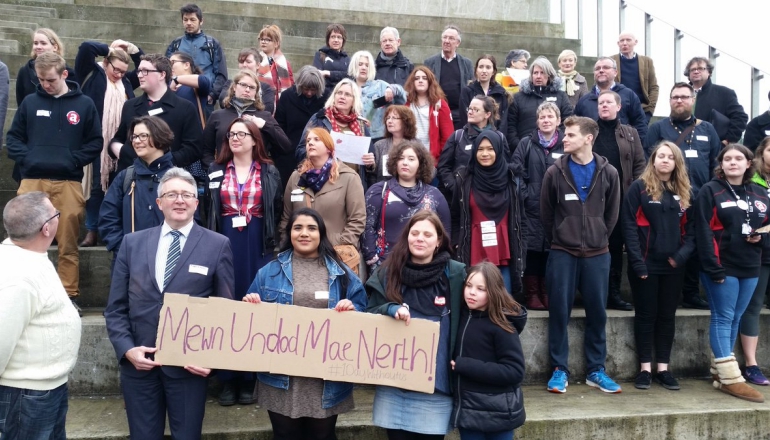 Monday 20 February is One Day Without Us – a day to highlight the positive impact that immigrants have in the UK, and what life would be like without immigrant workers. Thousands of people have taken part in protests and community events across the country, and told their stories online.

In the wake of Brexit, and the rise in hate crime following the vote, it is moving and powerful to see so many people come together and value the enormous contributions that people from all walks of life make. And the thousands of supportive tweets generated by the event make clear that, while there is a huge amount of racism and xenophobia, there is also a huge amount of support and solidarity for immigrants in the UK.

Events took place across the country:

Many used the day to thank people for the contributions they’ve made:

Thanks to all the immigrants who have helped me in all of the hospitals, surgeries, offices, shops, and everywhere else #1DayWithoutUs #1DWU

Thank you to all migrants who are our family, friends, colleagues, neighbours and clients #1DayWithoutUs We support diversity and inclusion

Many others told their personal stories:

I'm an immigrant, student, and small business owner. I contribute to the diversity + strength of the UK with science and art! #1DayWithoutUs

This migrant is proud to contribute to the U.K.'s higher education sector #HE #1DayWithoutUs #migration pic.twitter.com/U30Baj20eH

But it’s some of the messages from children which are the most powerful. Children in Stratford sent five envelopes full of origami boats with messages of solidarity to services working with refugees. Although sent last week, the messages fit perfectly with the day. The messages have been sorted and put on display.

And according to The Children’s Society:

They may also be used in wellbeing group sessions, to create a space of solidarity and safety that brings together young people and volunteers from which to explore and address wider issues impacting wellbeing.

Theresa May has repeatedly stated that restrictions on freedom of movement are one of the key components of her Brexit strategy. But the strength of feeling shown through protests, messages, and tweets is truly moving.

So many people living in the UK are immigrants or the children or grandchildren of immigrants. So many of us want to celebrate diversity. And all of us know there are severe problems in the UK – but these problems are caused by massive government cuts.

It’s time we stop the immigrant-blaming. We all need to get together and fight the real enemy: Conservative austerity.

– See how immigrant workers in the US highlighted their own important role on 16 February.