TV presenter faces public fury over her message on Islam, but it's one that we really need to hear [VIDEO] - Canary 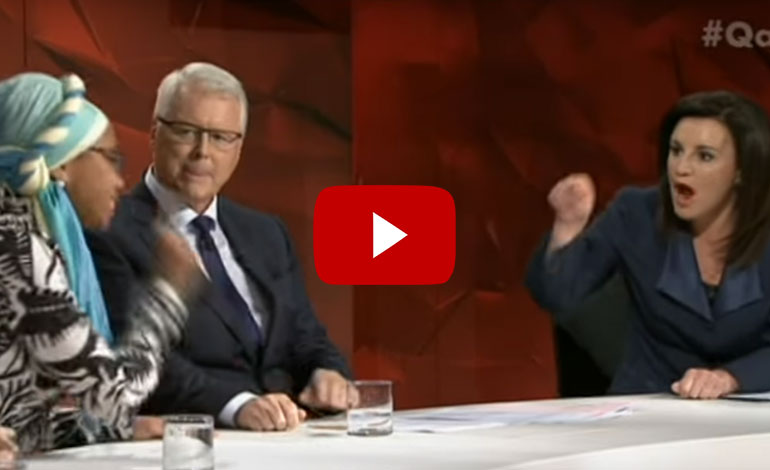 On 13 February, a debate about immigration on ABC News Australia led to an explosive argument on air. Nationalist senator Jacqui Lambie started sparring with TV presenter and activist Yassmin Abdel-Magied on the topic of Sharia law. Soon afterwards, Abdel-Magied faced a backlash, with a petition to get her fired quickly gaining steam. But she raised a crucial point during the debate that shouldn’t go unnoticed.

The debate started after an audience member asked if new rules surrounding immigration were necessary to avoid community conflict. Lambie then stated that anyone who supports Sharia law should be deported from Australia.

But Abdel-Magied raised a very important point, asking “do you know what Sharia law is?” She said [0.30]:

People talk about Islam without knowing anything about it. And they’re willing to completely negate any of my rights as a human being, as a woman, as a person with agency, simply because they have an idea about what my faith is about.

She also insisted on the importance of differentiating between culture and faith, stressing:

some countries run by Muslims are violent, sexist and do oppress their citizens. But again, that’s not down to Sharia. That’s down to the culture, and the patriarchy, and the politics of those particular countries.

Far-right website ‘AltCon News‘ quickly published a petition for her to lose her job. It had attracted over 25,000 signatures by the time of publication.

Whatever people may think about Abdel-Magied’s beliefs, her point about actually understanding what Sharia law and Islam are before criticising them is very pertinent.

Sharia law is a part of Islam. While some describe it as an Islamic legal system, others describe it as a way of life – an intrinsic part which teaches Muslims the most appropriate “path”.

But the media portrayal of Sharia law in the West has created great controversy, with outlets often perpetuating myths and aiming to paint Islam as a whole in a negative light.

What do people think?

A recent poll in the UK found that almost a third of respondents believe Islam is a violent religion and promotes acts of violence in Britain. But when asked about their understanding of the religion, only 41% of 18-to-24-year olds said they had a good understanding of it. And only 27% of those aged over 45 said the same.

Lambie continued to use negative stereotypes, however, and when the host asked if she accepted that some people may consider her words to be hateful, she responded [3.48]:

A debatable claim. But a worrying one nonetheless. Does hate really become acceptable if it’s ‘what the majority want’? Even if it’s based on stereotypes or misinformation pushed by right-wing media outlets and politicians? And even if it’s based on a fundamental lack of knowledge or understanding?

– Find out more about the debate.

– Put an end to hate crime.