Um... There might have been a malfunction at The Guardian [IMAGES] - Canary Workers’ Co-op 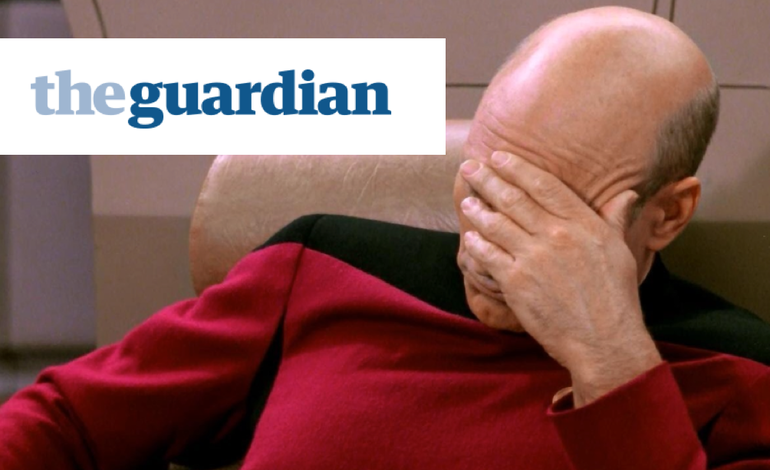 Eagle-eyed readers have noticed something odd about two headlines from The Guardian. And it’s likely to leave the paper’s journalists and editors a little red in the face.

What’s scarier to you? The history of the Russian Revolution, or the rise of modern day Nazis? For most, the answer would be the latter. But not for The Guardian. Readers discovered two articles by the paper. The first called for censorship of art related to the Russian Revolution. And the second called censorship of far-right propaganda an unacceptable attack on art.

The media outlet, which considers itself the home of British liberalism, would censor revolutionaries of the left. And yet, it would simultaneously defend the free expression of bona fide Nazis.

The malfunction is real

The way we glibly admire Russian art from the age of Lenin sentimentalises one of the most murderous chapters in human history. If the Royal Academy put on a huge exhibition of art from Hitler’s Germany there would rightly be an outcry. Yet the art of the Russian revolution is just as mired in the mass slaughters of the 20th century.

But just weeks later, Jones had an altogether different view on any moves to no-platform the far-right. He argued:

Historically it is not art galleries flirting with extreme images or ideas that kill democracy.

In an extreme age, extreme measures seem called for. Yet we risk becoming the extremists ourselves if we give in to the impulse to shut down opponents.

Jones’ writing highlights a painful tradition among political liberals for castigating the left while defending the right. It’s all about virtue-signalling. A liberal distinguishes themselves from the left by claiming to reject its supposedly authoritarian impulses. And they distinguish themselves from the far right by promising to give it a freedom of expression the far right would never grant them in return. But it is not white, middle-class liberals who face the daily verbal and physical violence of the resurgent far right. It’s not their deal to make.

But liberals have made this mistake before.

It’s ironic that Jones published his piece on the anniversary of the murder of German student Sophie Scholl. The 21-year-old was assassinated in a Munich forest in 1943, alongside fellow students of the White Rose Movement. Because while this left-wing youth movement had stood against the Nazis, the liberal establishment had appeased them. In previous years, the German parliament made the deal that gifted Hitler the Chancellorship of Germany. And months after making Hitler Chancellor, the same parliament signed the Enabling Act. This legislation granted Hitler totalitarian power over Germany.

Like Jones, German liberals were more afraid of the left-wing movements in Germany than the Nazis. And like Jones, they were wrong.