The Westminster journalist who picked a fight with Scotland... and lost [TWEETS] - Canary 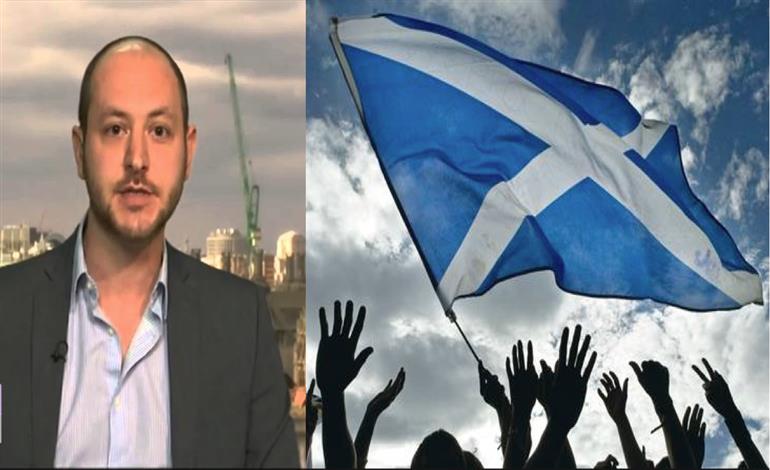 A Westminster journalist claimed overnight that the Scottish campaign for independence is “probably the most unpleasant… after the Trump lot. Certainly worse than Brexit.” It was the start of a fight with Scotland that he would lose, fast.

In 2014, Scotland voted narrowly to remain in the United Kingdom, with 45% voting ‘Yes’ (to leaving). Even The Telegraph admitted that ‘Project Fear’ won the referendum. This refers to the strategy deployed by the media and political class opposed to independence. Namely, to blast voters with scaremongering stories until they voted ‘No’.

Two of the deciding factors in the referendum were Scotland’s place in the EU, and keeping the sterling currency. At the height of the campaign, then-Chancellor George Osborne told Scottish voters that they risked losing the pound if they left the union. And EU Commission President José Manuel Barroso claimed it would be “extremely difficult” for an independent Scotland to gain membership to the EU. These are both demonstrably false.

As Scotland moves towards a second referendum following the UK (predominantly England and Wales) voting to leave the EU, a new anti-independence campaign has begun. This time, the focus is on linking support for independence to racism.

Westminster worked hard to portray the Scottish independence movement as racist during the 2014 referendum. They went as far as to compare pro-independence voters to Nazis. The detail of this strategy was laid out expertly by Gerry Hassan for openDemocracy at the time.

And now, history is repeating itself. London Mayor Sadiq Khan gave an inflammatory speech last week in which he stated:

Of course, most people understand the difference between racist nationalist movements and independence movements.

Using the logic of @SadiqKhan, Mahatma Gandhi was a bigot and a racist because he wanted independence for India. pic.twitter.com/ymteNXhjgh

So @SadiqKhan, were Pakistan and India racist and divisive for desiring self determination too? Absolute hypocrite. #NewIndyRef #SNP pic.twitter.com/4LKa5C8nWL

This suggests that his statements were not based on a genuine concern over racism, but form part of a cynical game of politics. The goal being to generate enough fear to keep Scotland shackled to a UK which is heading for a hard Brexit.

It was in this climate that Ian Dunt entered the fray. On the pretext of (entirely justified) outrage at the intimidation of a journalist who had backed Khan’s argument, Dunt swung for the independence movement as a whole.

But I'm sure someone will be along in a moment to tell us why Scottish nationalism is so much better than the other kinds. https://t.co/vHgi4CZKQ7

Twitterati peer Hugo Rifkind pointed out some issues with The Guardian article, namely its provocative headline. Which Dunt accepted. But he continued to besmirch the movement anyway.

Good point. I find Scot Nat debate probably the most unpleasant to enter, after the Trump lot. Certainly worse than Brexit.

At this point, pro-independence site Wings Over Scotland intervened with a painfully astute reality check.

Hang on – a nastier extreme than the one an MP got actually murdered in?

What, to your mind, was the "nastiest extreme" of the independence referendum? Genuine question.

While Rifkind engaged with the question, Dunt retreated to the safety of sarcastic sub-tweets with his colleagues in Westminster.

Quite. Say what you like about Pinochet, but at least he was consistent.

This tired routine has been applied for years against not only the independence movement in Scotland, but also Corbyn’s Labour movement too. Westminster journalists stoop to the most base terms of abuse and, when a response comes, they claim it to be proof of their view. Like here:

No I am not but the fact you respond that way kinda highlights the problem.

Notice how Dunt turns a perfectly civil piece of critical feedback into proof positive that pro-independence campaigners are somehow ‘unpleasant’. It’s inherently ridiculous to everyone outside the Westminster bubble, but gospel to those within it. Which is why the Westminster parties have lost almost every seat in Scotland, and are likely to lose the next independence referendum. Because when anyone finds themselves in an abusive relationship, they should leave.

Support the work of new media organisations below. Please add more that you like in the comments.