The entire media frenzy over Copeland and Stoke was a farce. Both seats are set to be abolished. - Canary Workers’ Co-op 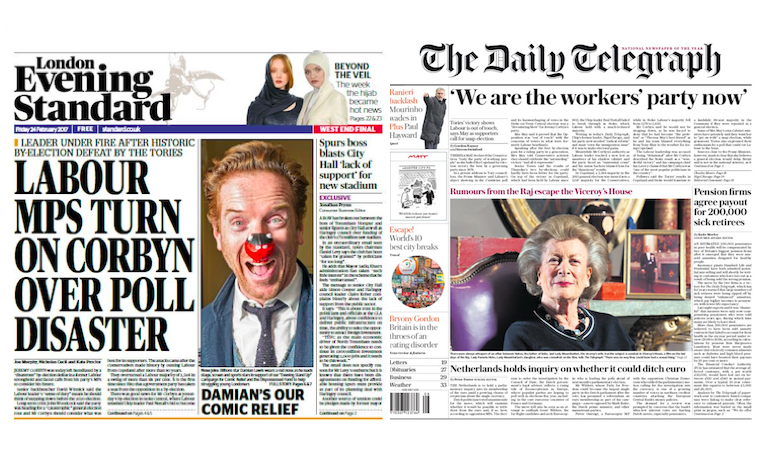 The Copeland and Stoke Central by-elections on 23 February followed weeks of frenzied media speculation. The media then used the results to pronounce everything from the end of Jeremy Corbyn’s leadership to Theresa May’s victory in the war against socialism. But it turns out the whole thing was a farce. Because neither constituency is likely to exist in three years’ time, thanks to the Conservatives’ boundary review.

Almost immediately after winning the 2015 general election, senior Conservatives announced that the new government’s top priority would be to redraw the nation’s constituency boundaries.

Two years on, a radical boundary review is well underway. The BBC calls it “the biggest shake-up of our political map in anyone’s lifetime”. It will reduce the number of MPs in the House of Commons by 50. The Boundary Commission for England published its initial proposals in September 2016. The proposals have yet to be finalised but, according to most analyses of the current data, the lion’s share of lost seats – up to 30 of them – will be Labour seats. All in good time for the next general election.

Among the 50 seats facing the axe are Copeland in Cumbria and Stoke-on-Trent Central in Staffordshire.

The Boundary Commission for England proposes carving Copeland up between two neighbouring constituencies and one new constituency, and abolishing Stoke-on-Trent Central, splitting its voters between Stoke-on-Trent North and Stoke-on-Trent South. Neither seat is likely to be contested in its current form during the 2020 general election.

The government’s stated reason for its boundary review is to “make votes of more equal value”. Basically, Britain’s constituencies vary substantially in size. After the review, each constituency will need to contain within 5% of the electoral quota of 74,769. So the UK’s four boundary commissions are charged with proposing the best way to chop up, merge and abolish constituencies to make that happen.

Worse, the Conservatives are basing the review on data from 1 December 2015 – just after the government deleted hundreds of thousands of names from the electoral register. Those names disproportionately come from deprived, urban and university areas – i.e. they are more likely to be Labour voters. Since that time, more than 2 million voters have joined the electoral rolls, but they’re all being left out of the calculations.

In short, the UK’s new boundaries will be based on outdated and manipulated data. As a result, Labour could lose 10% of its seats, according to some analyses. The Lib Dems – whose participation in the Coalition government helped set the stage for these changes back in 2011 – could lose an eye-watering 50% of their seats. The Conservatives, meanwhile, may lose just 4% of theirs.

After the by-elections, journalists wasted no time in proclaiming Labour to be electorally dead in the water. The results meant the end of Corbyn’s leadership. They represented a final victory for Theresa May in the war against socialism.

But, without exception, the media ignored the real threat to Labour’s future: the Conservatives’ use of a boundary review to launch a radical attack on multi-party democracy. As the BBC’s Shaun Ley has written:

This boundary review… could finish off the Labour Party’s chances of ever returning to government.

Both by-elections were taking place in seats facing the axe. The media response made a mockery of our democracy. Instead of holding our governing party to account over its industrial-scale gerrymandering, our entire media used the by-elections as an opportunity to attack the Leader of the Opposition. And now, the Conservative government looks set to lock itself into power for a generation or more.

– Our media is failing to hold the government to account, but you can still make a difference. Right now, the Boundary Commission for England is running a public consultation. It’s seeking comments on all previous responses to its proposals. Please get stuck in with comments about your area. You can also find out more about the proposals put forward by the boundary commissions for Northern Ireland, Scotland and Wales.