The BBC actually challenged the Chancellor on Tory election fraud, but there's a catch [VIDEO] - Canary 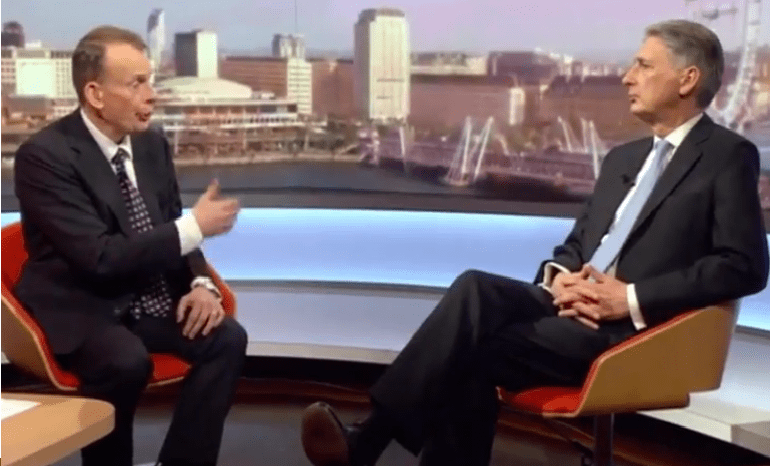 Channel 4 News have done sterling work in pursuing the Conservative Party about election irregularities. Do you think you’re going to face by-elections as a result of what’s coming?

But there’s a catch. Marr did not challenge Hammond’s answer. Even though the Conservative Party hasn’t been cooperating fully with the Electoral Commission or the police. Quite the opposite, in fact.

Despite two statutory notices, time extensions and a legal obligation, the party withheld information from the Electoral Commission relevant to its investigation in May 2016. The Conservatives only handed over the information after the watchdog applied for a High Court order.

On top of this, Conservative Party lawyers opposed a request from Kent Police for an extension to the time limit for their investigation. But Kent Police were eventually granted the 12 month extension. Nine police officers are presently investigating allegations that South Thanet MP Craig Mackinlay illegally overspent in the 2015 General Election. The election was high profile because Mackinlay was up against UKIP’s Nigel Farage.

But the electoral fraud allegations go beyond the seat in Kent. As Channel 4 News reports:

The South Thanet seat is one of 29 currently under police investigation after Channel 4 News revealed hundreds of thousands of pounds in Conservative campaign spending may not have been properly declared.

The dates of the documents contained in the cache further suggest that Mr Timothy may have breached strict civil service rules that banned special advisors from any political activity while they are still receiving their taxpayer-funded salary.

Downing Street is “deeply worried” that the police investigations could threaten May’s thin parliamentary majority, according to The Daily Mail. The probes could result in a number of by-elections.