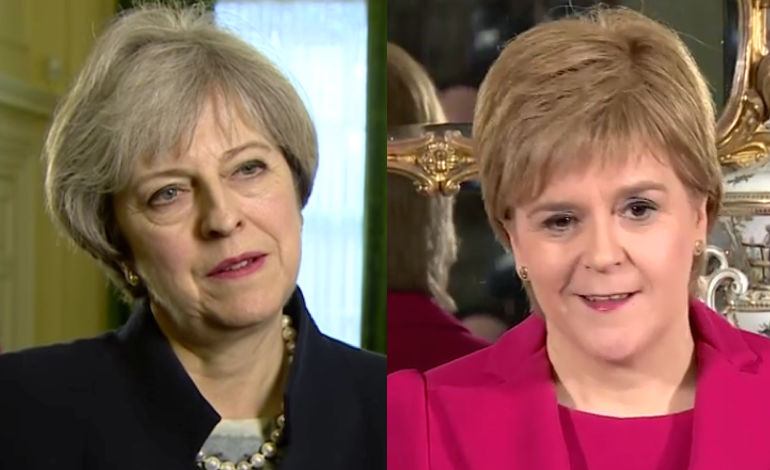 People’s responses to the Prime Minister telling Nicola Sturgeon that “politics is not a game” are superb. So superb, in fact, that the second Scottish independence referendum is already worth it. No matter what your view.

Hitting back at the Scottish First Minister, Theresa May claimed:

The tunnel vision that the SNP has shown today is deeply regrettable. It sets Scotland on a course for more uncertainty and division, creating huge uncertainty

She rounded off her message with:

Politics is not a game.

With her irony and hypocrisy reaching dizzying new heights, people called the Prime Minister out on social media:

“Politics is not a game,” says Party who took UK out of EU over a power struggle and treated it as a public school jape. #indyref2 #Brexit

Given Brexit, May doesn’t really have a leg to stand on.

Especially when you consider the Conservative government’s vote on 13 March against guaranteeing the rights of EU citizens in the UK. People have concluded that the government will use the three million citizens as ‘bargaining chips’ in the upcoming negotiations.

"Politics is not a game" says @theresa_may, who is using EU citizens lives as poker chips in a game that she is too inept ever win

MPs reject Lords' amendments on EU nationals #righttostay by 335-287. But politics is "not a game", of course.

Others clocked the Prime Minister’s pick for Foreign Secretary:

"Politics is not a game" says the woman who made Boris Johnson foreign secretary. #WeMayYouMayNot

TORIES: "Politics is not a game!"

ALSO TORIES: Puts Boris Johnson in charge of Brexit diplomacy to keep him out of the country

Some noted May’s own behaviour throughout the EU referendum:

"Politics is not a game" says woman who arguably played the canniest game possible through the Brexit campaign to win the Tory leadership!

'Politics is not a game' says the PM who created an entirely artificial deadline and then used it to stifle debate and cut scrutiny. #Brexit

On the other hand, sometimes pictures say it better:

Politics is not a game. pic.twitter.com/RwpHVjG0kS

"Politics is not a game". pic.twitter.com/pjapse0A20

How NATO and the EU have responded

NATO Secretary General Jens Stoltenberg has said that an independent Scotland would have to reapply for membership of NATO.

There’s a similar process for the EU. Margaritis Schinas, the European Commission’s chief spokesperson, said that Scotland would not have an automatic place in the EU. But in the wake of the Brexit vote, it is considered likely that Scotland would meet all the requirements to join. It is also understood that the new state would have to join the Euro.

Guy Verhofstadt, the European Parliament’s chief Brexit negotiator, has a consistent position on this:

If Scotland decides to leave the UK, to be an independent state, and they decide to be part of the EU, I think there is no big obstacle to do that

The Prime Minister’s response is even more of a joke

But recent polls show a country roughly split 50/50 on supporting independence. Plus, the Scottish people elected the SNP convincingly. Its manifesto called for a second referendum if there is a “significant and material change such as Scotland being taken out of the EU against our will”. And Scotland voted against Brexit by 62%.

So the EU referendum result mandates another choice for the Scottish. The English can surely see why Tories constantly governing is aggravating. Especially when Scotland never votes for them.