There's an elephant in the room in the Scottish referendum debate. And a guest pointed it out live on the BBC - Canary 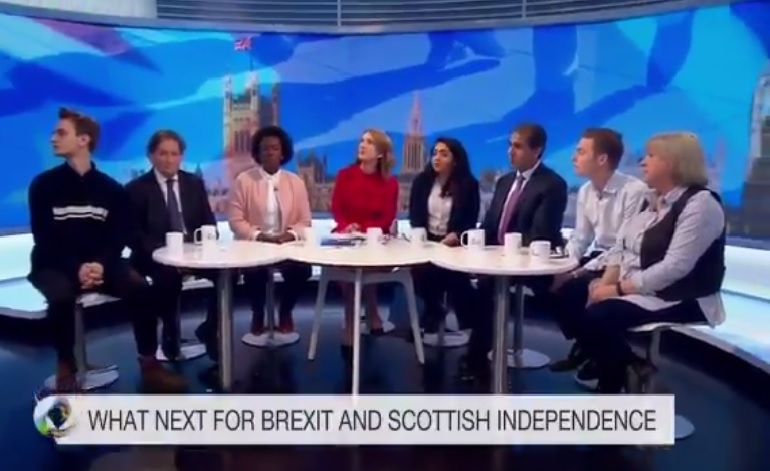 The BBC‘s Victoria Derbyshire show held a discussion on the possibility of another Scottish independence referendum on 14 March. And one woman mentioned the elephant in the room during the debate.

That elephant is the population of EU nationals in Scotland. And how they would vote in the next referendum. Especially when the very argument the No campaign used last time to persuade them to vote against independence works against the union this time round.

Remember what you told us?

Derbyshire introduced Joanna as a Polish citizen who has been living in Scotland for over 10 years. The BBC host then asked Joanna how she was feeling, after Scotland’s First Minister Nicola Sturgeon announced plans for another referendum. Joanna replied:

Yes, there was something I wanted to mention about the independence referendum in 2014; and how people voted. If I remember correctly, at every event pre-referendum, EU nationals [were] told that the only way for Scotland to stay in the European Union would be to vote no.

And [a] couple of years later, we are where we are; and I have to say that at least yesterday we [were] guaranteed a choice, as opposed to being told what we’re getting.

Sturgeon raised this same point ahead of the 2016 EU referendum. But now, if a Scottish referendum does go ahead, those EU nationals in Scotland – and the population at large – will be presented with the opposite choice. If they vote no to an independent Scotland, they can kiss goodbye to the EU. Voting yes, meanwhile, will at least provide some chance they’d be able to stay in.

I need a doctor I can trust

I feel like I’m a patient on the operating table. With no anaesthetic. With no doctor by my side. I’m in pain already. And there is Scotland there, holding my hand, saying everything is going to be okay.

Derbyshire paused the discussion there. But not before pro-union speakers responded with incredulous amusement. That reaction was not, however, shared by the young pro-independence speakers, who smiled or nodded in agreement. Such as Stephanie, who also spoke on the issue:

#IndyRef2 debate: "Is the union worth preserving when it's not got democratic values? …You can't just ignore people above the border" pic.twitter.com/SxJhQeAMww

We don’t really know which of these sentiments would win through in a referendum. Since Sturgeon announced plans for another referendum, politicians have readily claimed Scottish citizens have no appetite for it. But a recent poll found around half of those surveyed thought Scotland should be independent; young people in particular.

And for those young people and EU nationals like Joanna, it looks like Brexit will play a big part in their decision-making. Especially since the No campaign used the EU as a major bargaining chip the last time round.