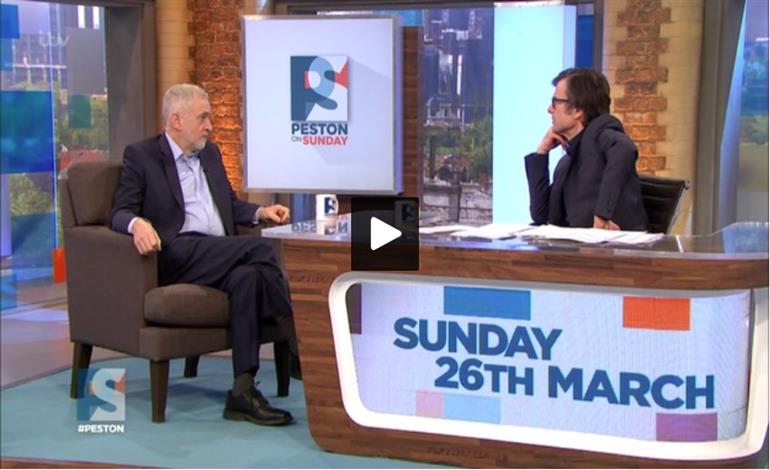 Labour leader Jeremy Corbyn appeared on ITV‘s weekend political show Peston on Sunday at the weekend. Things went so well, producers felt the need to kill it with a bizarre stunt that left viewers baffled.

In a wide-ranging interview, Corbyn first spoke out against Theresa May’s ‘counterproductive’ anti-terror laws, before moving on to police at large. As ITV reports:

Labour is ‘ready’ for an early general election should Prime Minister Theresa May decide to pursue one.

He would instruct MPs not to block a government bid to repeal the Fixed-term Parliament Act to allow a poll to take place before 2020.

Labour would oppose plans to hand ministers ‘Henry VIII’ powers to change European Union laws as they are repatriated to Britain without full parliamentary scrutiny.

He does not believe a second referendum on Scottish independence is a good idea but Westminster should not block it if the Scottish Parliament calls for one.

Viewer response to the interview was largely positive.

But suddenly the Labour leader was asked a truly bizarre question. Would he like to swap jobs with imperilled Arsenal boss Arsene Wenger? With Peston’s co-host Allegra Stratton saying:

As Arsenal manager you could re-energise the club’s membership and perhaps Labour could benefit from a leader with an economics degree and a genuine desire to stay in Europe.

Corbyn defended well with a cute remark and that should have been the last of it.

Indeed. After all those meaty discussion points, viewers were asked to chew over the only question that meant nothing at all:

Do you think @jeremycorbyn would make a better @Arsenal manager? @ITVAllegra looks at some of the similarities. #Peston pic.twitter.com/QoNFK1g1ll

Members of the Westminster press pack decided to get in on the action too; with tweets like this from Tom Newton Dunn, Political Editor at The Sun:

And before you know it, The Sun, The Mirror and others were reporting this as the main outcome of the Peston interview.

For viewers, it felt like a missed opportunity; with the choice of cheap jokes over disciplined journalism leaving many baffled.

Corbyn/Wenger mockery embarrassing and (would have thought) beneath you. Show some class – your audience deserves better than this. #peston

The problem with our media

The treatment of Corbyn makes more sense when you see who owns it.

The Media Reform Coalition published a report in 2015 entitled: “Who owns the UK media?” And researchers found that just three corporations own 71% of national newspaper circulation. These owners decide who to hire, what stories to cover, and ultimately shape the public opinion of the country.

The head of the BBC (our nation’s supposedly impartial public broadcaster) is former HSBC bank chief Rona Fairhead. And her Head of News and Politics is former Murdoch hack James Harding. Little surprise, then, that numerous independent studies have found the BBC guilty of bias towards business and conservative sources. And hostile to left-wing ideas and guests.

The board of the allegedly centre-left Guardian looks like a who’s who of the UK establishment. You can see the full membership of the board here. The impact of this has been a restraining force on The Guardian’s editorial stance on issues from austerity to tax avoidance and evasion. Forbes and The Bureau of Investigative Journalism have produced detailed and shocking reports of the paper’s own use of tax loopholes to exploit the tax system in its favour. Media Lens has covered The Guardian’s role in demonising the movement for Scottish independence. And here is an extensive list of the unprecedented abuse the paper has meted out to Jeremy Corbyn and his supporters.

That’s all before we even get to the likes of The Times, the Telegraph, The Sun, and The Daily Mail – where things get really murky.

No surprise, then, that multiple recent studies have shown that Britain’s media has shifted rightward; And is now viewed as the most right-wing in Europe.

In this climate, ideas to the left of centre are about as welcome as a fart in an elevator.