We need to talk about what happened on The Andrew Marr Show on Sunday, because it was not OK [VIDEO] - Canary 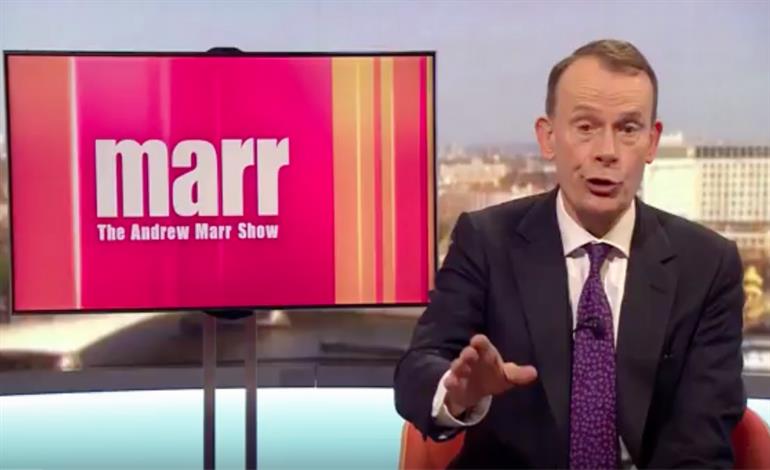 In an interview with Andrew Marr, Home Secretary Amber Rudd announced a new authoritarian policy, without a hint of challenge from the host. This is not OK.

In the wake of the 22 March Westminster attack, there have been a number of high-profile media attacks on Google and Facebook, and on messenger services Telegram and WhatsApp; the former two for permitting distribution of alternative news websites, and the latter for message encryption services. The government and media are linking the offending organisations to terrorism in order to put in place authoritarian controls that would neuter their effectiveness.

The media could benefit by cutting off advertising revenue and distribution to competitor news ventures. And the political class could benefit by intercepting secure communications used by investigative journalists and whistleblowing organisations.

He sat before a blown-up image of the WhatsApp message informing users that their messages are private, and stated:

It tells you [that] you will be completely safe. Nobody will ever see. And that is what a lot of people think terrorists and others are using.

Can I put it to you that that situation is now completely unacceptable?

Home Secretary Amber Rudd agreed. And then stated her plan to end encrypted messaging services. This would mean there would be no such thing as a private message in the UK. Not for citizens, organisations or journalists.

WhatsApp's 'end to end' encryption is "absolutely unacceptable…there should be no place for terrorists to hide" says @AmberRudd_MP #marr pic.twitter.com/aVtDP6FRvD

Britain is already the most watched nation on Earth; with our country now the most advanced surveillance state on the planet.

The push for these powers comes less than a year after the passing of Theresa May’s Investigatory Powers Act, which trashed citizens’ right to privacy. The Act means internet service providers must now store details of everything you do online for a year, and make it available to dozens of public agencies. This gives authorities unprecedented access to the online lives of citizens: our political interests, our networks of friends, family and colleagues, our religious and political views, our medical concerns, our sexual interests, right down to the basic pattern of our daily life.

But this is not enough for the May government, which wants to control everything we see and share online, and monitor it too.

These terrorists want to destroy our freedoms and undermine our democratic society… By implementing draconian laws that limit our civil liberties, we would be playing into their hands.

Unsurprisingly, the establishment media ignored or praised Rudd’s authoritarian stance. But others were less impressed:

We must show terrorists the UK will not alter after Westminster attack!

As predicted, UK govt now uses London attack to justify more spy powers, despite no evidence would have prevented ithttps://t.co/IZhdYAEk2X

How would banning WhatsApp encryption have prevented the attack anyway, given that govt admits he was not under investigation at the time?

It’s really simple. A government should not be able to make this kind of announcement without a defiant kickback from the press. And our media should be leading the charge against this creeping authoritarianism. Not forming a chorus line.