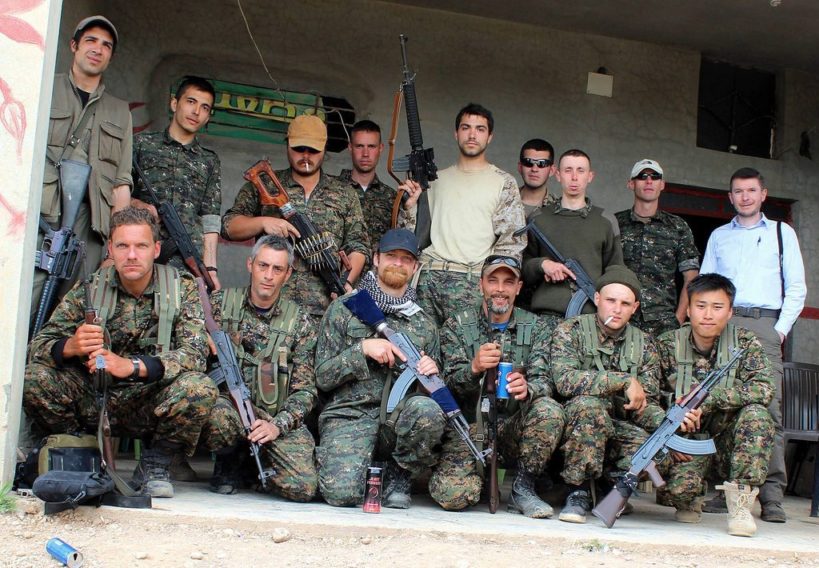 CORRECTION: this article was updated at 8.50am on 24 March 2020 to remove the name of a signatory who says he was included in the original letter in error.

After the 22 March terror attack in London, British anti-terror fighters decided to take a stand against far-right propaganda. And Britain needs to hear their message.

On 24 March, Kom News published an open letter from British volunteers who have joined the fight against Daesh (Isis/Isil) in Syria. These people have fought alongside some of the most effective ground forces (the Kurdish-led YPG forces of Rojava in northern Syria) which are currently advancing on the self-proclaimed Daesh capital of Raqqa as part of the Syrian Democratic Forces (SDF).

The anti-terror fighters speak out against all “hate and bigotry” in their letter, saying:

we don’t remember seeing anyone from Britain First, EDL, UKIP, or their like, by our side in battle

And fighting as part of what they call “a multi-ethnic, multi-faith entity”, they insist that:

The only way to defeat hate and extremism is to not give in to it.

See the full letter below:

We are some of an increasing number of British nationals fighting in Syria and Iraq as volunteers with local forces against the Islamic State [Daesh].

We wish first and foremost to express our sorrow and anger at the recent terrorist attack in Westminster, London, and to convey our sincerest and most heartfelt condolences to the victims and their families. We know only too well what is to lose friends, to treat those horrendously wounded, to pull the dead and dying from the rubble.

We also wish to express sympathy and solidarity with the many ordinary Muslims going to work and school today feeling that they are under special scrutiny, and fearful of what this might mean for them. We share their fear, and we urge anyone who might be tempted to take against ordinary Muslim people to think again. If you associate them with the Islamic State, you are giving such groups exactly what they want: a greater and more violent gap between the Muslim world and ours.

The familiar sounds of hate and bigotry are sounding again – on social media, and in the more guarded mainstream press – where the intent is nonetheless clear. Hate crimes will spike again. There are calls to demolish mosques. The fact that local Muslims raised thousands for victim support, in the immediate aftermath of the attack, is easily drowned out by the bandwagon. The EDL have called a snap demonstration, eager to make hay from the suffering of innocent people.

For all the sound and fury, we don’t remember seeing anyone from Britain First, EDL, UKIP, or their like, by our side in battle. Which is a good thing, because we wouldn’t have tolerated them.

Our ranks are made up of Kurds, Arabs, Yezidis, Brits, Yanks, Canadians, Aussies, Asians, Europeans – Muslims, Christians, Alevis, atheists – too many faiths and races to list. A multi-ethnic, multi-faith entity, standing united against hate and extremism. The majority are, in fact, Muslims, and not only are we proud to stand shoulder-to-shoulder with them – the truth is, we can’t do this without them.

Don’t stand with Britain First, the EDL, UKIP or those who talk and think like them. Stand with us.

British fighters of the YPG

– Read more Canary articles on Syria and Rojava. See more international reporting from us at The Canary Global.