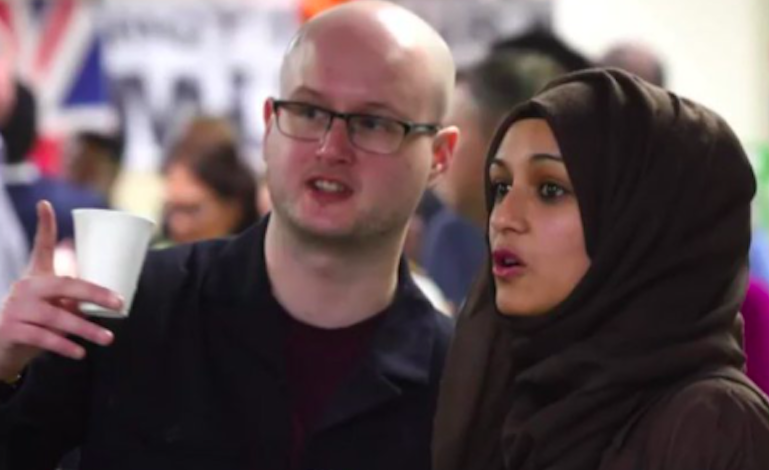 The Union Jack came out in full force in the heart of Britain on Saturday 7 April as two very different events took place in Birmingham. The English Defence League (EDL) marched through the city centre. But Birmingham Central Mosque held a counter event with bunting, cakes, and tea.

As a handful of protestors turn up for the #EDL rally in #Birmingham, the Central Mosque is throwing an afternoon tea party to promote unity pic.twitter.com/1HDnM02CrJ

Guess which was better attended?

It's going to be a hectic day for #EDL stewards picking all the tumbleweed up from the streets of Birmingham today. #TheEDLIsDead pic.twitter.com/fZkD4Ca7sR

OK, if you need helping out, people chose [paywall] cake over hate:

Looks like #Brum Central mosque tea party was much more popular than a herding of #EDL halfwits. How very Brummie!https://t.co/d35pfaVVrR

And while two people were arrested during the far-right group’s demonstration, others were having a very nice time at the Mosque’s “best of British” tea party:

It was no coincidence, of course. The tea party was a direct response to the EDL March. And people thought it was a perfect way to make a stand:

Full marks to the Brummies who faced down the #EnglishDefenceLeague scum outside Birmingham's Central Mosque yesterday. pic.twitter.com/kXmDNZJNWk

Brilliant reply from Brum to those who want to cause hatred in our diverse communities. Central Mosque & @WestMidsPCC organise a tea party👌 pic.twitter.com/CwWzXtOvCh

And it’s obvious where the police wanted to be:

And unity was certainly the message the Mosque were trying to get across:

#BirminghamNews: Birmingham Central Mosque held a tea party in response to the EDL demonstration, uniting people from all backgrounds. pic.twitter.com/3QoLEncJPA

Down with this sort of thing

West Midlands Police and Crime Commissioner said the EDL were “spreading a message of hatred”.

They have come from outside Birmingham and don’t understand our values.

The guests were also pleased that the Birmingham Muslims were open and part of the community. One woman said:

Being English doesn’t mean hating other people. It’s about [us] all being part of something. And its nice that the mosque have opened the doors.

And this isn’t the first time England’s Muslim community has tackled hate with tea. In 2013, six protesters turned up outside York Mosque to protest. Members of the Mosque met them with tea and biscuits and invited them in. And it seemed to work.

Some might regard these responses as being quintessentially English. Indeed. There is more that unites us than divides us. Carry on.