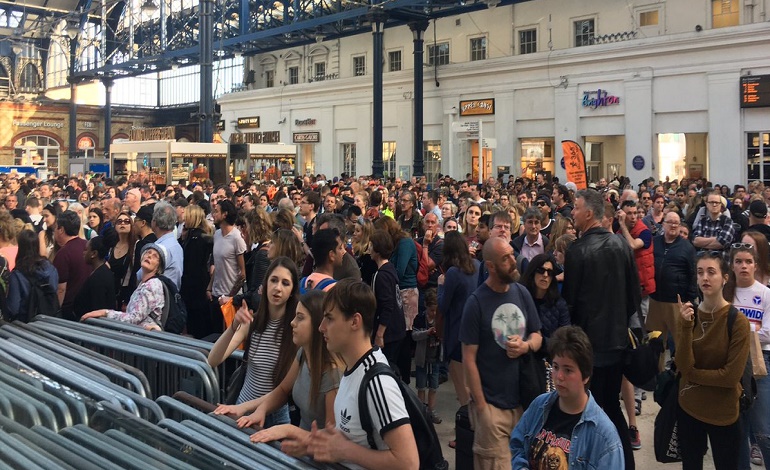 Passengers have branded Southern Rail “outrageous”. Because the boss of the embattled rail company has just seen his pay double. The news comes after passengers said one of its stations had turned into “hell on Earth”.

You’re running one of the worst rail companies. So here’s another £200k

As The Canary previously reported, the government announced in September 2016 an extra £20m for GTR. This was to try and sort out the rail operator’s mess. And it was coming from public money. But there was an almighty slap in the face for passengers and workers alike. Southern Rail had actually just increased its profits to nearly £100m. Also trade unions are currently in a protracted industrial dispute with Southern Rail about driver-only operation (DOO) trains.

The news comes after chaos at Brighton Station on Sunday 9 April. Passengers said it was “hell on Earth” there after the Brighton marathon, amid cancellations and delays:

Southern were "not expecting it to be that busy" after a sodding marathon. Well done Southern.

[There were] a number of incidents affecting the service including several infrastructure failures in London and a broken down train at Preston Park station. All of these have contributed to delays and cancellations, leading to crowding at Brighton station and on board both Southern and Thameslink services.

But the Association of British Commuters (ABC) told The Canary:

Southern Rail users are outraged by this news. But the more interesting story is why he hasn’t resigned. Southern is a subcontractor to the government and it is well known that they are intensively micro-managed by the Department for Transport.

Compare the comments of Southern’s parent company CEO David Brown, in defence of its plummeting share price: ‘We haven’t actually done anything wrong in this contract – we’ve done the things we were asked to do by the government in the interests of the customers.’

We don’t know exactly what bonuses and conditions lie behind their heavily redacted ‘management contract’ but his payrise tells us that Horton is in fact doing his job very well. It’s just his job description we are unfamiliar with. Suffice to say, this may have more to do with stripping costs to the core and running an industrial dispute by proxy than actually providing a good service.

There is a warped logic in Southern’s boss getting such a huge pay rise when the company is performing so appallingly. But, when it comes to privatised public services, logic always appears to go out of the window, anyway. So, it’s really just business as usual for the UK’s embattled rail network.

– Read more from The Canary on Southern Rail.