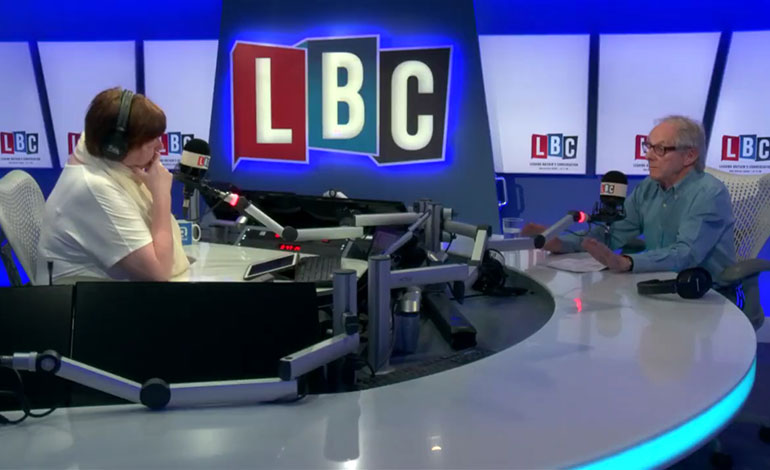 On 7 April, Ken Loach joined LBC presenter Shelagh Fogarty on her afternoon talk show. Among other topics, the pair discussed Ken Livingstone’s recent suspension from the Labour Party. LBC portrayed the interview as an “extraordinary clash” between Loach and Fogarty. The truth is, it was exactly the kind of calm and thoughtful discussion about antisemitism that we need to be having more often.

On 4 April, Livingstone was suspended from the Labour Party over comments he made about Hitler supporting Zionism. Defending social media posts made by Labour MP Naz Shah, Livingstone said:

When Hitler won his election in 1932, his policy then was that Jews should be moved to Israel. He was supporting Zionism before he went mad and ended up killing six million Jews.

Livingstone has since defended his claims, saying there was one point of “real collaboration” between the Nazis and Zionists before the second world war.

Some Labour members have slammed Livingstone’s comments as antisemitic, and say he should have been expelled from the party. Chief Rabbi Ephraim Mirvis has also condemned his comments. But many Jewish members and supporters of the Labour Party have spoken in defence of Livingstone.

The LBC interview focused on a Momentum event called Take Back Control. But during the interview, Fogarty also asked Loach about Ken Livingstone’s recent suspension. Loach argued for an examination of what Livingstone said, saying:

In the general discussion, there hasn’t been this precise examination of what was said and the different interpretations of that. So what I’m appalled by is this what smacks of a witch hunt. Because… Ken Livingstone did more for good for race relations during his time as London mayor than anyone else has ever done. And he has a terrific track record. So I wouldn’t rush to judge him to condemn him.

Fogarty went on to question Loach about his defence of Livingstone, saying: “I don’t knowingly engage in witch hunts”. Loach urged Fogarty to speak to people from all sides of the debate. Neither side raised their voices and both listened and responded to each others’ comments.

Yet LBC chose to present the exchange as “very, very heated”. After posting the interview on its website, it wrote: “This is the intense exchange between Shelagh Fogarty and film director Ken Loach about Ken Livingstone that got quite testy”. On Facebook: “An extraordinary clash as Ken Loach launches into a heated defence of Ken Livingstone’s controversial comments about Hitler.”

Many people have taken to social media to respond to LBC’s description of the interview. On Facebook, users wrote:

Thought Ken Loach came across as quite a fair minded and researched individual warning about dangers of getting caught up in witch hunts.

And while some have criticised LBC’s portrayal the interview, some have also criticised Loach for his defence of Livingstone. Sky News reporter Richard Suchet also said:

Ken Loach sailing DANGEROUSLY close to the wind in his defence of Ken Livingstone on LBC. Says "interests" of Jews and Hitler "coincided".

Livingstone’s remarks have certainly resulted in an uproar, one which has split opinion. But open debates like LBC’s are really important. As Loach suggests, we need to gain perspectives from all sides of the argument before rushing to condemn someone. And the fact that LBC – and so many others in the media – have tried to sensationalise those debates is unhelpful in the extreme.

– Read more from The Canary on Ken Loach