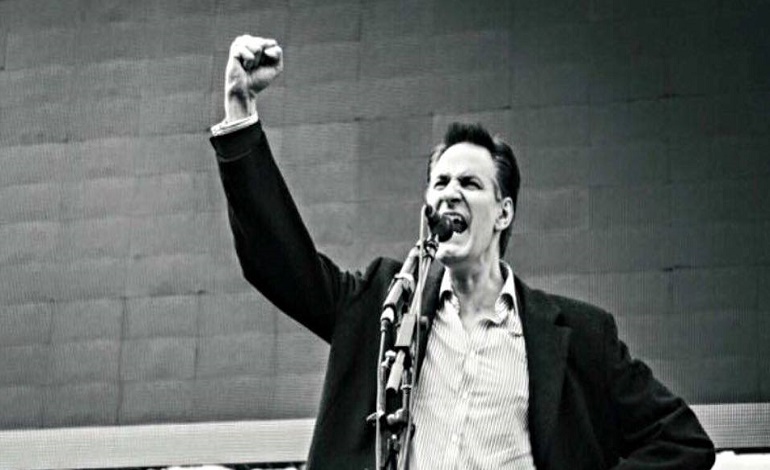 Peter Stefanovic is a force to be reckoned with. The lawyer-turned-campaigner is getting a reputation for producing video shorts that cut through the mainstream media bias. Ones that tell the viewer the whole story on political and social issues. And The Canary spoke to Stefanovic about his life, career and what drives him to fight injustice via vlogging.

Stefanovic comes from a council estate, working class background. His father was an immigrant who he says “had never been to school and was unable to read and write. What he could do he taught himself”. Stefanovic says his father was a staunch Labour supporter, who had a “fiery temper”; something that his son appears to have inherited. But his childhood memories are mostly happy:

We never had much but dad worked hard all his life to put food on the table. I vividly remember in winter we would scrape ice from the inside of windows and pile coats on our beds to keep warm at night. I will never forget how hard my dad worked and how tired and exhausted he would look when he came home from the factory at the end of the day. And the estate had a great sense of community and camaraderie.

But his working class background became a sticking point when Stefanovic was 11. He, like many children, had to sit the 11+ exam to see if he was suitable for a grammar school. He viewed the exams as deciding “whether we would become lawyers, doctors, even politicians or whether we would go to work in the local factory as our parents had done before us”. Stefanovic says it’s “no surprise” that he didn’t pass the exam. So, along with his twin brother and friends, he spent the next four years at a secondary modern school. Which was, somewhat divisively, opposite the Grammar school he could have gone to.

The social division he witnessed as a child has stayed with Stefanovic, and drives a lot of his campaigning now. It’s apparent in one of his latest vlogs which takes Theresa May to task over the education system:

I can’t say how much I detest the socially divisive nature of selective education, the single purpose of which is to reinforce the class system and I know what I’m talking about because I lived it! Children from middle class backgrounds will always have an advantage of parents who really understand the importance of education and who will often arrange weeks of private coaching for their child’s 11+ exam. And that’s why selective education is so socially divisive. It simply reinforces the existing system. I believe every child is entitled to an equal chance to excel, not just the select few.

Despite this, he went on to excel. But not without a few twists and turns along the way.

Stefanovic left secondary school after four years “with little or no qualifications”. He thought that “as a working class lad what did I care?”. He says it was the 1980s, he was 15, glad to be out of school and that “there was always the Friday night disco at the local football club to look forward to”. Stefanovic went on to stack shelves in Tesco and work in a factory; all perfectly acceptable jobs. But a chance reading of The Daily Mirror one morning changed everything, as he recounts:

I saw a coupon at the back of The Daily Mirror about studying O’Levels at home by correspondence course. I’ll never really know what motivated me to cut that coupon out and post it off but a couple of weeks later I was studying O’levels in my bedroom after work.

But even this presented Stefanovic with a dilemma, as he had to find a school to sit his O’level exams at. He recalls that “I couldn’t ask the secondary school which had thrown me out as soon as they could. Nor the grammar school, as I had been involved in a number of lunchtime clashes with pupils who went there”.

So, he wrote to the Headmaster of the Stowe School, an expensive private school. The Head was shocked as no-one from the town had ever written to him like that before. And Stefanovic was allowed to not only sit his exams at the school but also use its facilities. He recalls:

None of the pupils knew anything about my background or who this ‘new boy’ was who had suddenly appeared in the art room. Every other word the boys spoke was a pretentious ‘OK Yah!’ In fact, most of the time they would actually ‘yah’ over each other… The upshot of all this was that I obtained an exam certificate which said I had sat O’Levels at Stowe. This bizarrely seemed to open doors later on with people saying ‘I see you went to Stowe, Peter’ to which I would reply, ‘Yah!’

And to cut a long story short, Stefanovic did his O’levels and A’levels, trained as a lawyer and qualified in 1991. It was a career that spanned more than 20-years.

The junior doctors: where it all began

But, while it gave him the opportunity to challenge injustice professionally, Stefanovic really came into his own as a campaigner during the junior doctors’ dispute which began in October 2015. His campaigning, however, didn’t come without its challenges:

It was contentious in my former law firm, not least because it’s a national one which specialises in medical negligence. You can imagine how the firm went out of its way to distance itself from me on that one! I can honestly say that in my legal career I had never felt so isolated but ultimately you have to do what you believe to be right and if we as lawyers don’t take a stand and speak out against injustice, who will?

Stefanovic believed, and still does, that the imposition of the junior doctors’ contract was “bullying and intimidation”. And that it was “unfair, unsafe and discriminated against women”. So he decided to act, putting out his first ever vlog. It was in defense of the junior doctors. And just a week later, he was speaking at a 20,000-strong rally in London:

The junior doctors’ dispute was just the beginning of Stefanovic’s campaign work. He has tirelessly supported numerous causes, from student nurses, train drivers and the WASPI campaign to the former miners battling for their pensions.

Stefanovic is also vocal about his support for Jeremy Corbyn. He says it’s “simple” why he supports the Labour leader:

He is a man of honesty, integrity and courage in a political system now based on lies and spin and misinformation; a man who encompasses all of the qualities I most admire. Corbyn is a man who will not get down on bended knee to the establishment and for that reason they want him gone. Believe me when I say that’s a man worth fighting for.

And many people would agree, judging by the response to one of Stefanovic’s videos. The vlog where he calls out BBC Political Editor Laura Kuenssberg’s bias has had over 1.5 million views:

It’s this holding of the mainstream media to account which runs through Stefanovic’s work. And it shows that the public is starting to turn away from traditional sources of news. Because the bias from the press is fairly clear. A report[pdf] by the London School of Economics and Political Science says the press had turned into an “attack dog” against Corbyn. It said 57% of articles in the press were critical of Corbyn; 74% distorted his views, and 56% did not give the Labour leader a voice at all. Public trust in the media has fallen by its sharpest ever levels, from 36% in 2016 to 26% this year. And only 25% of Britons think journalists tell the truth. So, Stefanovic’s work is a welcome antidote.

The public seems to like Stefanovic. And it’s probably because his integrity and passion shine through in his work. But, far from being a career ‘commentator’, his zest for fighting injustice comes from the right place:

I speak from my heart, in my films, and I think that resonates with people. I don’t believe in spin or bullshit. And I call a spade a spade and if I believe someone is lying, even if that person happens to be Prime Minister, I’ll call them out on it. I think the advantage of speaking to camera is that the public can look you directly in the eye and form their own view on whether you’re speaking the truth. I’m sick to death of watching smirking politicians who never say what’s really happening. You can actually see the deceit on their faces. I guess in many ways that’s why my films have become so popular. People know what to expect from me and that’s an honest opinion on the real facts.

When asked why he feels so passionately about fighting injustice wherever he sees it, Stefanovic is unsure of his answer. “Maybe it’s my background. Maybe it’s innate in my very being. I would like to believe both”. But he says he “abhors” inequality, social injustice and a system “that punishes the poor for the crimes of the rich”. And he doesn’t mince his words about the Tories:

This vile and arrogant Government is inflicting the worst injustice on the poor I can recall in my lifetime and I consider it a duty to fight them at every turn. It’s a Government which openly and willfully forces children, the disabled and the unemployed into poverty so it can cut taxes for millionaires.

People like Stefanovic are the future of the media in the UK. Articulate, honest and passionate. But with characteristics learned from life experiences, not a book. He delivers opinions you won’t find in the pages of The Guardian. And a truth that will not be silenced:

Ultimately, just like everything else in my life, I do what I believe to be right. I will not be told what I can and cannot do, I will not be told how to think, I will not be controlled and will always speak from my heart. I speak out against social injustice and inequality because it’s the right thing to do. Is that mantra enough for you?