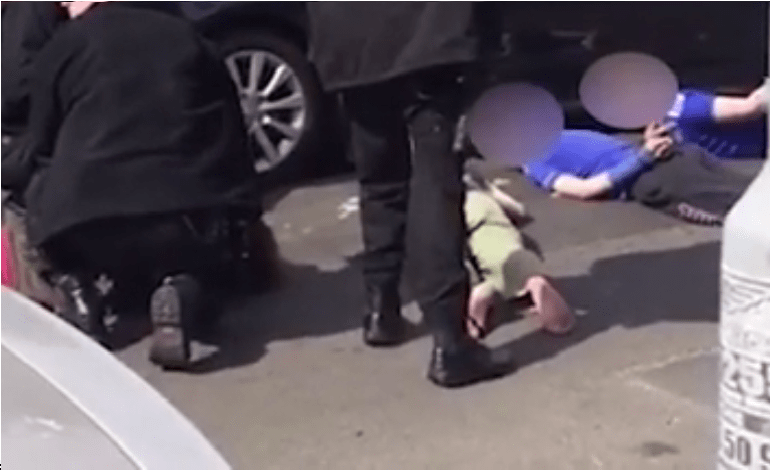 UK police forced Muslim children to the floor with machine guns in Birmingham. The mother said her children were “treated like animals” by West Midlands police.

The mother recalled the officers putting her in the back of a riot van while they searched her house and her innocent children. She said her kids were taken from their beds. The police forced the children, aged between 15 and 21, onto the ground and handcuffed them at gunpoint.

West Midlands Police said they were responding to reports of an armed man on Pretoria Road, Bordesley Green. But, speaking to The Canary, the police refused to say why that house or those young people were specifically targeted.

I have no idea what happened, why it happened, or anything like that. I left the house just before 12 yesterday afternoon to go and pay some bills down the road, and left my children in the house as they’re on holidays. When I was coming back I saw a police van just over the bridge, at the end of my road.

My first thought was that they must have been doing surveillance or that something had happened down my road, as they’ve been down here a lot in recent weeks. Then armed police officers started to approach me and ask me questions about where I live and what I had in the house. I thought it must have been a joke or prank or something like that. But then they started to grab me by the wrist and try and drag me towards the van, which was when I realised that it was serious.

Several witnesses and neighbours expressed concern at what they considered disproportionate use of force.

One witness said the police “embarrassed” the kids “for no reason”. They continued:

I know that people are scared and it is right because of what has happened in Westminster and now in Sweden. It’s right that people are alert but I think this is crossing a line. People have to live their lives, and who knows how much disruption this will cause the kids, especially at such a tender age.

A 28-year-old mother of two, who saw what happened added:

I saw the children being taken out of the house, with their hands in the air. They looked very scared, very scared. The police lay them down and just started patting them and searching them, asking them questions. You could see that they were shaking.

Anti-Muslim hate crime rose 326% in 2015 and spiked further after Brexit. Police should be working to combat Islamophobia, not contributing to it.

– Hop on board with TELL MAMA and help end anti-Muslim attacks.