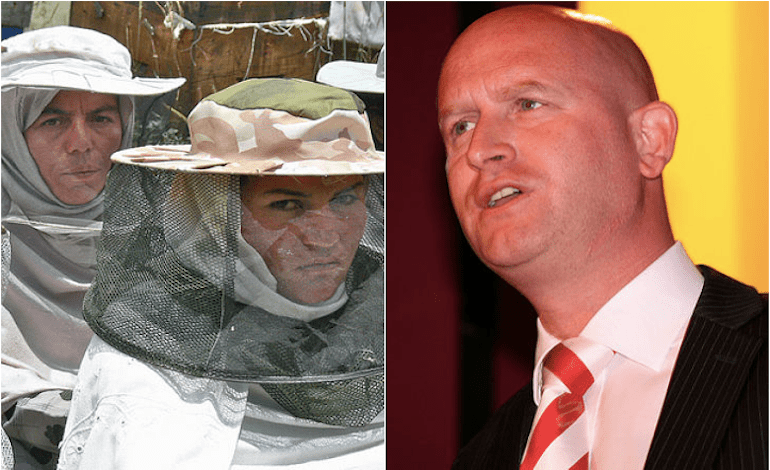 PR disaster Paul Nuttall, UKIP’s current leader, has been accosted by one aggrieved group – the British Beekeepers Association (BBKA) – after UKIP announced its ban on face coverings. The group was concerned that the ban would apply to the face coverings that beekeepers need to wear.

UKIP announced the proposal as part of its integration policy platform. It also included:

The set of policies has unsettled other politicians.

UKIP’s ‘integration agenda’ is an assault on multiculturalism and an attack on Muslims. It’s full-throttled Islamophobia.

Research shows that school teachers are still too scared to talk about FGM, honour-based violence and forced marriage, let alone report it. This is where we should concentrate our efforts, not forcing girls to undergo invasive medical examinations.

It has also caused UKIP’s foreign affairs spokesperson to quit, saying the veil ban was a “misguided policy”.

First they came for the beekeepers…

The BBKA has raised the impracticalities of this ban. The group’s Public Affairs Director, Martin Smith, said there would be times beekeepers have to wear their veils in public places. He said:

We would need a clear exemption to allow us to continue to perform this valuable public service.

Questioned over whether the ban would affect beekeepers at the launch of UKIP’s election campaign, culture spokesperson and deputy leader Paul Whittle branded the question “ridiculous”.

Well beekeepers use Muslin to filter beeswax so they’re doubly hit, as UKIP will accidentally ban that too as they’ve never learned to spell

Can you ask him about astronauts too please?.. https://t.co/SLrpq69bY9

Now UKIP has clarified that the ban won’t apply to beekeepers, there is a case to answer on whether their policy is a full-on fight against Muslims alone. The party has said, for instance, that the ban on religious courts shouldn’t apply to Jewish courts. And it’s not proposing a moratorium on any other faith school.

There is also no evidence for other claims they make. Such as implying ‘grooming’ is an Asian and Muslim problem, in order to exploit the widespread sexual abuse in Rotherham for political gain.

But the beekeepers have given us some perspective on the issue at least. And among Nuttall’s recent embarrassments, it’s possibly the most amusing story of the election so far.