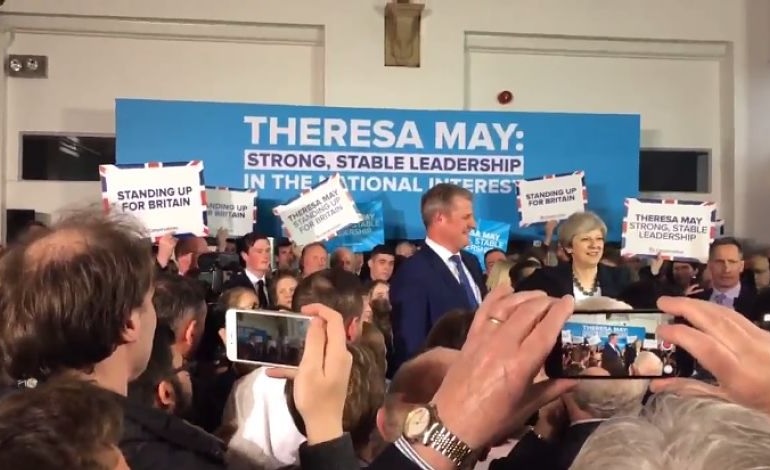 Prime Minister Theresa May ‘campaigned’ in Leeds on 27 April. But people noticed something odd about her ‘strong’ appearance at a community centre in the city. Namely, that the entire spectacle was a stitch-up.

Theresa May arrives for rally in Leeds to huge cheers pic.twitter.com/oyvZ1fqnIx

May didn’t invite the general public to the event. Instead, it was a private do. An invitation-only one. And eligibility for attendance hinged entirely on whether you were a part of the ‘Tory faithful’. Because according to The Guardian, the Prime Minister only invited Conservative campaigners.

And her decision to ‘campaign’ in such a safe space shows how ‘strong’ she feels her case for re-election really is.

The Guardian‘s Jessica Elgot covered May’s appearance in Leeds. Elgot explained that May was in Leeds to ‘lay bare’ her “ambitions to capture some of Labour’s most historic seats in England”. It was this “bullishness” that May was bringing to the “voters” in Leeds, Elgot said.

But how could May be described as bullish when she chose to limit her audience to party supporters? And how is May bringing her “ambitious” case to the “voters” of Leeds if she excluded all voters apart from Conservative campaigners?

Unsurprisingly, May’s not-so-gutsy move drew attention on social media. Particularly after one community centre worker confirmed that the rally was a private affair:

100% correct. That's my workplace, she didn't arrive until we'd all left for the day. Everyone in the building past 6pm was invite-only.

Members at Leeds community centre where PM spoke today said they were kept out and Tory activists shipped in… https://t.co/5YF1ZKEtve

Retweet this far and wide, the cynical illusion of a 'strong and stable' May, who is weak and fearful!https://t.co/uFrrAp6V3v

May is therefore pretending to be in a company with cheering representative employees but in reality bussing-in handpicked Tory supporters??

@theresa_may is a coward – only wants staged ops with pre-approved, controlled audiences. It's why she won't debate, either. #ChickenMay

Some also rounded on the media for not jumping on May’s choice:

@OwenJones84 @jonsnowC4 @bbcnickrobinson @bbclaurak… Think you should have a look at this. Most unusual to clear out real people this way!

Why doesn't this surprise me! You reporting this @BBCBreaking or you want to stick with usual Pro-Tory lies?!

Others, meanwhile, pointed out what would happen if the shoe were on the other foot. Both in terms of how the media would react if Jeremy Corbyn pulled the same stunt and how the Labour leader’s rallies fare in comparison:

If that was Corbyn the press would call it Factorygate; instead, they're all confused cos that mess Boris said an unusual word.

It has also struck observers that May’s banner at the event didn’t have the word ‘Conservatives’ on it. It merely used her name and the Tories’ general election buzzwords. The company that hosted the event, meanwhile, is facing criticism. Shine, however, claims it didn’t invite the Prime Minister. It says the Conservative Party simply booked and paid for the venue. But it’s now the second time a Conservative Prime Minister has spoken at the venue. And as Shine is a community-driven space in a Labour heartland, May’s appearance is raising some eyebrows.

Nevertheless, it’s May’s choice of audience that’s the real scandal. Because if she’s sincere about leading the country “in the national interest”, she’d better start inviting some of the nation to her rallies. And a room full of Tory supporters doesn’t count.

The Canary asked the Conservative Party to confirm whether the event was invite-only but received no response.