Do not adjust your internet. These crowds for Corbyn are in a Tory-held town [VIDEO] - Canary 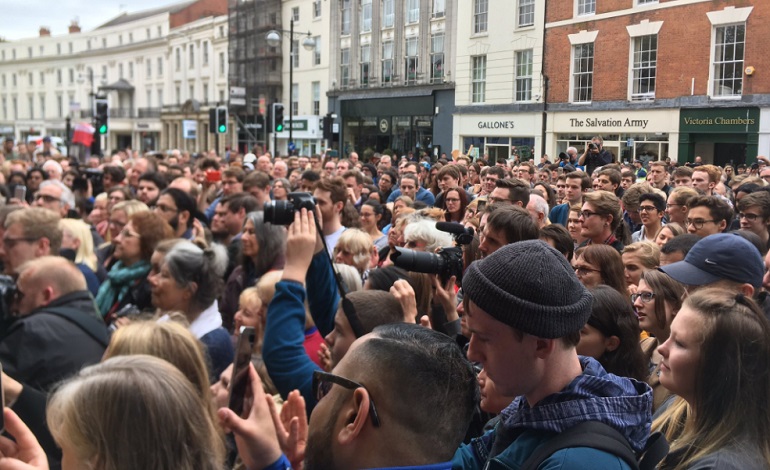 On Monday 8 May, Jeremy Corbyn was out and about on the campaign trail. And his appearance in one Tory-held town caused a bit of a storm.

Leamington Spa is in the constituency of Warwick and Leamington. The seat is held by Conservative Chris White, who got a 6,606 majority at the 2015 general election. An increase of 5.4% on the party’s victory in the 2010 election. But historically, the area in Warwickshire has been a prime marginal seat, with Labour only managing a majority of 266 in 2005. So everything is to play for on 8 June. And the constituency is a target seat for Labour.

With this in mind, Jeremy Corbyn showed just how marginal the seat may well be with a walkabout in the town. In a speech, he urged supporters to help out in Warwick and Leamington. Because if the party did, he said:

That’s a message to the whole country. We are strong. We are healthy. We’re in great heart. We’re going to go out there with a message. Simply put it this way: for the many, not the few!

And as social media showed, there was a large turnout for the Labour leader:

"Tories out, Corbyn in!" is the chant at this pretty big Jeremy Corbyn rally in Leamington Spa. He's on his way from Worcester pic.twitter.com/OPAbkt8QEi

But crowds alone cannot be a barometer of Labour’s current popularity. Because while the opinion polls are still looking difficult (at best) for Labour, the party’s supporters need to be reaching as many people with Corbyn’s message as possible if the party stands any chance of victory on 8 June.

There’s something interesting about the scenes in Leamington Spa, though. If this is the groundswell of public support for Corbyn in one marginal seat, then who knows what could be achieved in others. So it’s currently ‘game on’ in the 2017 general election. And the buoyed-up Corbyn above certainly looked like he has a lot of fight left in him yet.