You might think things couldn't get worse for Jeremy Hunt after that car crash interview. But they did. - Canary 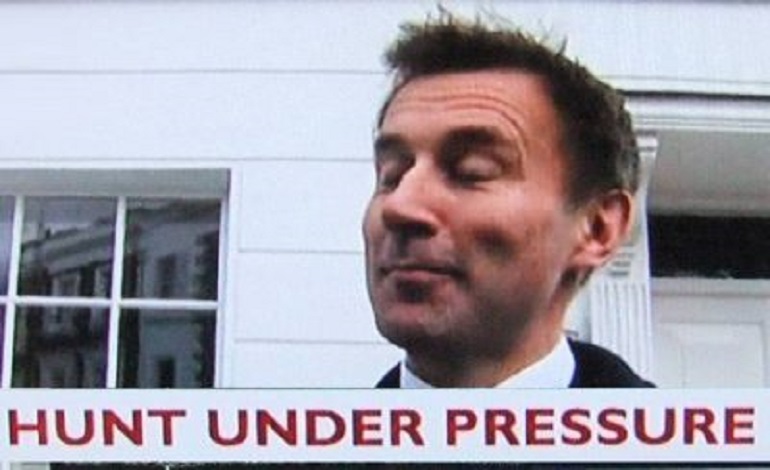 On Sunday 7 May, Jeremy Hunt was forced to defend his appalling record as Health Secretary. And it didn’t go well. But now, there is even worse news for Hunt. A new progressive alliance means that he may not even be an MP in the next parliament.

While local alliances between anti-Tory parties have formed in Brighton and elsewhere, this one is particularly remarkable. Because all of the main opposition parties locally – Labour, Lib Dems and Greens – have agreed not to campaign in the election. Instead, they’re all behind Dr Louise Irvine, leader of the National Health Action Party.

In 2015, Labour was ahead of the Lib Dems in Surrey South West. But traditionally, it is the Lib Dems who have been the main opposition. In 2001, the party cut the Conservative majority to just 861 votes. But the strength of feeling towards the NHS is strong in the constituency. In 2015, National Health Action came fourth, also just ahead of the Lib Dems, with 4,851 votes.

Using the figures from 2015, Hunt would still win. But the combination of strong feelings about the NHS and the stance from the other parties could make the difference.

And it’s happened before. In 1997, Conservative MP Neil Hamilton lost his safe Tatton seat after a former BBC journalist stood against him, following sleaze allegations aimed at Hamilton.

Hunt was appointed as Health Secretary in 2012. And in five years, his record has been nothing short of appalling. Which isn’t surprising when you consider that he co-authored a book supporting the privatisation of the NHS.

On the Andrew Mar Show, Marr targeted Hunt’s record of failure as Health Secretary. He made Hunt admit that the A&E waiting time standard of four hours hasn’t been met for two years under his watch. And he also led Hunt to concede that the NHS is failing to meet the 18-week standard for seeing people who need treatment; some 370,000 people, according to Marr. The presenter did fail, however, to question Hunt about the creeping privatisation of the NHS.

But Hunt’s record speaks for itself. And NHS workers across the country are giving us an unambiguous message. If we want to save the NHS, we have to get rid of the Tories.

A new anti-Tory alliance targeting the person who’s been destroying the NHS for years is an excellent place to start..