Theresa May fell apart so badly on TV, Tory supporters had to swoop in and save her [VIDEO] 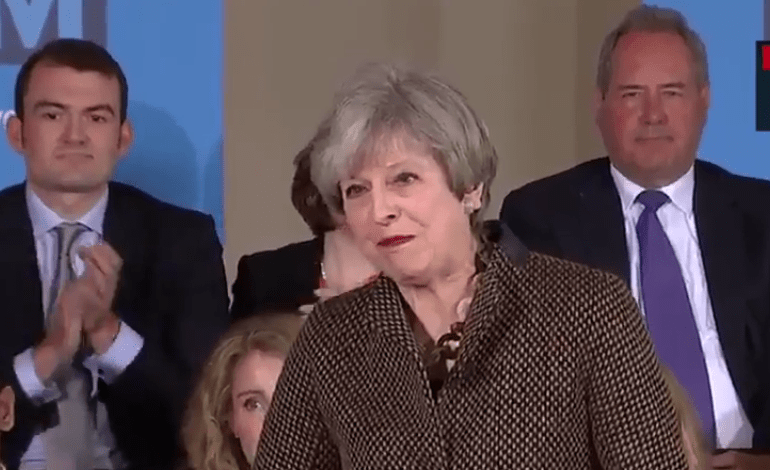 Theresa May has refused to appear on TV debates ahead of the election. At a campaign event in Harrow, London, the Prime Minister’s defence of that decision was so weak that party faithfuls had to drown her out with applause:

I’m taking part in debates up and down the country, taking questions from people, meeting people, getting out and about, and ensuring that I’m talking directly with voters and listening directly to voters.

Even the campaign event May spoke at proved her defence was a lie. In Harrow West, May refused to take questions from anyone other than handpicked journalists. And, as The Guardian pointed out, this was “rather generous by the standard of these events”.

So far, May’s campaign has been a carefully stage-managed affair. One of the most striking examples of the tightly controlled procedure was an event in Cornwall on 2 May. Local paper Cornwall Live reported:

Awkward for May and the Tories

May’s refusal to defend her party’s record on TV seems at odds with her predecessor, David Cameron. He said:

Cameron argued that other debates, like those trumpeted by May, “are no substitute for a proper primetime studio debate”. That was in 2009, when Cameron also accused incumbent Prime Minister Gordon Brown of both “dithering” and “bottling” for not immediately agreeing to a TV debate.

May has agreed to appear on a BBC Question Time election special. But still refuses to debate Jeremy Corbyn. She won’t appear on the show at the same time as the Labour leader.

Many across the country are wondering where the so-called “strong and stable” leadership is. The sitting Prime Minister is apparently incapable of debating the opposition leader. Nor can May negotiate with any of her own electorate in a free, democratic setting. So people are questioning how she will negotiate a decent post-Brexit deal with the EU.

The ‘safe pair of hands’ image of May, painted by the political and media establishment, is a mirage. Too much time off-script and it would collapse. That’s why Tory supporters had to cover up her weakness with on-cue clapping at the event in Harrow. And that’s why she won’t debate Corbyn.

In the words of Cameron himself, “bring it on”.

Prime Minister Theresa May responds to question on why she won't be taking part in televised debates during the #GE2017 campaign #Vote2017 pic.twitter.com/mdSeuWhnhO