Theresa May finally met real people. And it could have cost her millions of votes - The Canary 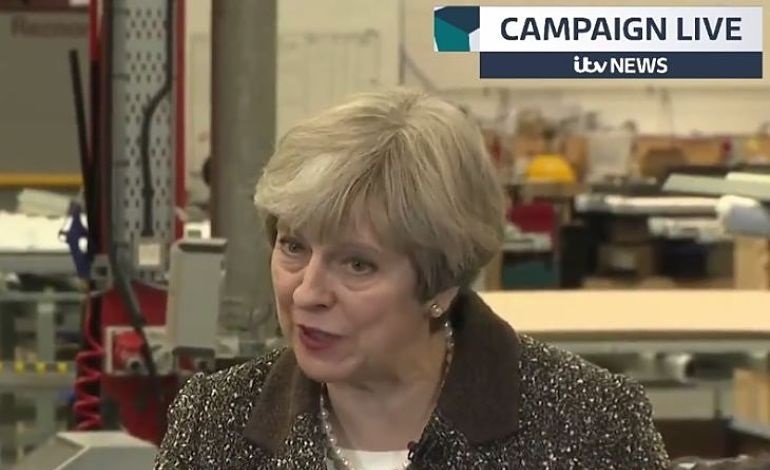 Theresa May has received heavy criticism for only attending stage-managed events in her general election campaign. But on 9 May, she met real people. And she allowed them to ask her questions.

One man, however, gave it to May straight – explaining exactly why he believes Jeremy Corbyn is a better choice for working people.

May was speaking to workers in a factory in Leeds. One female worker asked May about the fairness of child benefit rules, after changes the Tory-led Coalition government made to them in 2013. Another asked about potential changes to maternity and paternity pay. May said she didn’t have specific plans to change either.

Then another worker spoke. He said:

You mentioned earlier that you haven’t got no plans for childcare. But do you not think it’s a big issue that parents are now thinking they’re better off not working rather than going to work, because money’s that ridiculous? You can pay up to, like, £40-60 for a day. You’re more or less going to work per day to pay for your child. You’re not earning nothing. So you’re better off being at home.

Have you got plans for that? Because the only thing I can think of is, with Jeremy Corbyn saying wages are off up to £10, that’s the only thing that’s going to help us out…

We need money… It’s about now. What’s going to help us now?

May noted that her government has already made changes to childcare provision. And she promised to review those changes to check if they’re working.

But the worker’s message was clear: the system isn’t working. And people need help now. So May’s promise to review it and potentially tinker around the edges in the future isn’t going to cut it. At least not for the millions of people in the position that the Leeds worker spoke of.

And considering that May is the leader of a party that claims it can be trusted to ‘make work pay’, this worker’s statement is a testimony to the Conservative Party’s failure to fulfil a key pledge.

The worker in Leeds referenced Corbyn’s pledge to raise the minimum wage to £10 an hour. This increase would affect around 5.6 million people. And it could potentially save the taxpayer around £40bn, through the reduction in welfare paid to those on wages that leave them in poverty.

Corbyn has also pledged not to increase VAT, an indirect tax. These sorts of taxes overwhelmingly affect those on lower incomes. In fact, Labour has ruled out tax rises for 95% of earners.

Tangible and clear actions that will lift people out of poverty, and actually make work pay, are sorely needed. A low-pay economy, with skeletal public services and foodbanks on the rise, is hurting many people in Britain. But in a few weeks’ time, everyone gets their chance to reject or accept that vision for the country.

And the choice couldn’t be clearer.