BREAKING: Zero Conservative MPs will be prosecuted in the 'Tory election fraud' scandal. Except one... maybe [IMAGES] - The Canary 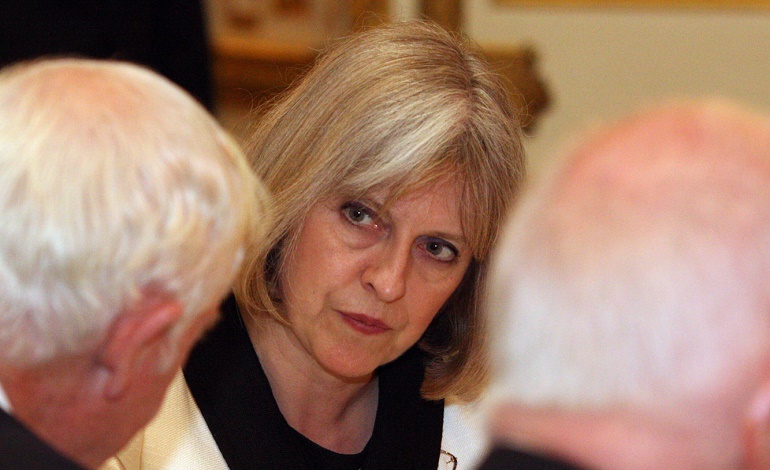 The Crown Prosecution Service (CPS) has said that no MPs, Conservative Party employees or members will face criminal charges over the alleged ‘Tory election fraud’ scandal. But that one constituency in Kent was “still under investigation”.

The CPS released the following statement at 11am on Wednesday 10 May: 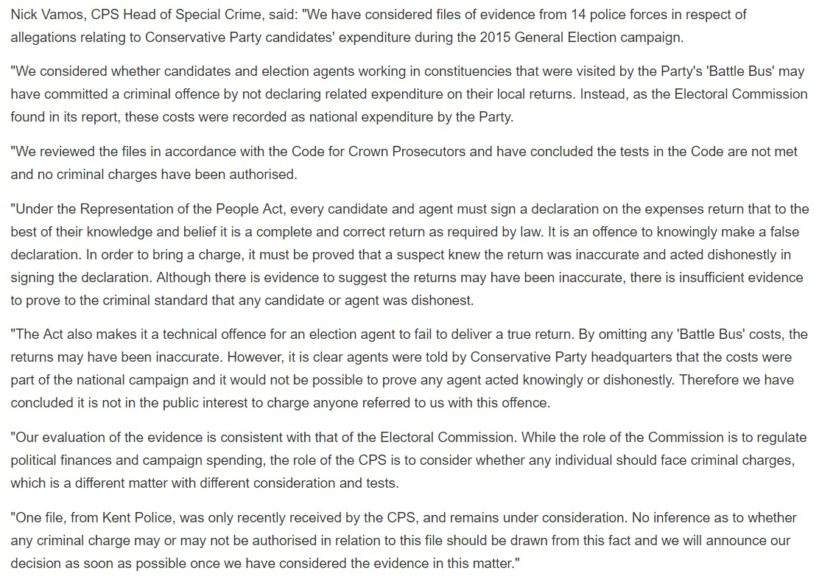 As The Canary has documented, the Electoral Commission (EC) and police were investigating allegations about Conservative Party election expenses. Specifically, that the party may have mis-declared tens of thousands of pounds of campaign expenses.

Each party is allowed to spend around £15,000 on campaigning in each constituency. Overall, the EC found the party failed to declare or accurately report more than £275,000 of campaign spending at three by-elections in 2014 and at the 2015 general election.

The expenses included the use of hotels for campaign staff, and the so-called Tory ‘Battle Bus’. If they should have been declared locally, this would mean that the Tories could have breached spending limits in numerous constituencies. That, in turn, could have put the legitimacy of the 2015 general election result into question.

David Cameron’s Conservative government was the first in British history to face police investigations into alleged electoral fraud. And one such example was in South Thanet, Kent, where Craig Mackinlay is the Conservative MP. Channel 4 News alleged the party spent around £20,000 on Mackinlay’s 2015 campaign, but did not declare it. In June 2016, Mackinlay went to court to block a police investigation into the matter. The judge threw the case out, saying that the alleged fraud was on an “unprecedented scale”. And that the police investigation was of “very significant public interest”.

Other lines of inquiry?

A separate investigation by The Canary opened up another line of enquiry in the scandal. Whistleblowers told The Canary that they were paid by a company used by the Tories to call Conservative-leaning voters in marginal seats. The evidence suggests that the Tories may have failed to declare such spending.

And as we also reported, there are questions surrounding the Conservative Party’s Facebook advertising. During the 2015 general election, the party spent £1.2m on Facebook advertising, compared to Labour’s £16,454. Many of those ads targeted people by constituency. The Electoral Commission [pdf] says if campaign activity only promotes the national party and national policies, it should count as national spending. But if it promotes both the local candidate and national policies, then some of the cost should be declared locally. And much of the Tories’ Facebook campaigning was locally targeted.

The decision by the CPS leaves us with more questions than answers over the allegations.

The CPS states that Conservative Party spending returns were “inaccurate”. Although, it believes that no representative of the Tory Party was “dishonest”. Why? According to the CPS, the agents weren’t acting dishonestly because they were “told by Conservative Party headquarters that the costs were part of the national campaign”.

This appears to set a dangerous precedent for future investigations.

However, the public can deliver their own verdict on the Conservative Party on 8 June.