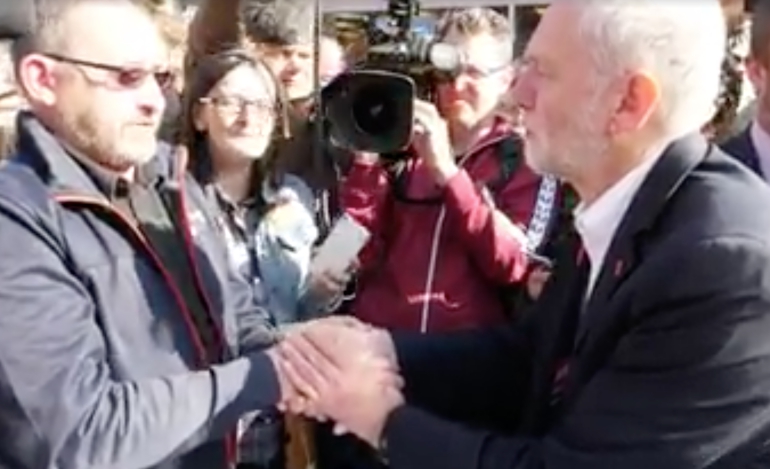 The Daily Mail made much mileage out of Jeremy Corbyn allegedly snubbing a military veteran. But there’s footage of him meeting a veteran that the paper would much rather you didn’t see.

The Labour leader met the veteran while campaigning in Angela Rayner’s constituency of Ashton-under-Lyne. And it shows him taking time out to have a chat with him.

Corbyn spoke with the man about issues concerning veterans, including mental health and housing. He stated:

I have a lot of former soldiers in my own constituency and I have spoken to the army about this. It’s too much reliant on charity. It needs to be statutory involvement.

While the government is happy to spend billions on renewing Trident and is gung-ho about using the weapon in a first strike capacity, its record on looking after former military personnel is a disgrace.

There’s a mental health crisis among veterans. In 2013, the numbers of soldiers and veterans committing suicide was greater than the number killed in Afghanistan. And homeless charities in 2017 estimated that there are 7000 ex-service people living on the streets.

Meanwhile, the Tories are trying to make mileage out of Corbyn being against military combat, claiming that he would “fail to deal effectively with terrorism”. But as many people have pointed out, Corbyn has been on the right side of history for the last 30 years. And many of the conflicts Corbyn opposed have been the cause of increasing terrorism.

Not only would the world be a safer place under a leader that wants to negotiate rather than bomb, but Corbyn has also guaranteed that he will look after the veterans who have served. Whether or not you regard these people as heroes or support the wars they fought in is irrelevant. These people fought on the orders of successive UK governments and many are suffering years later.

This is a disgrace. But it is yet another area where Corbyn is offering a clear alternative and much needed hope. And we need to keep reminding people of this despite the bile that papers such as The Mail like to spout.