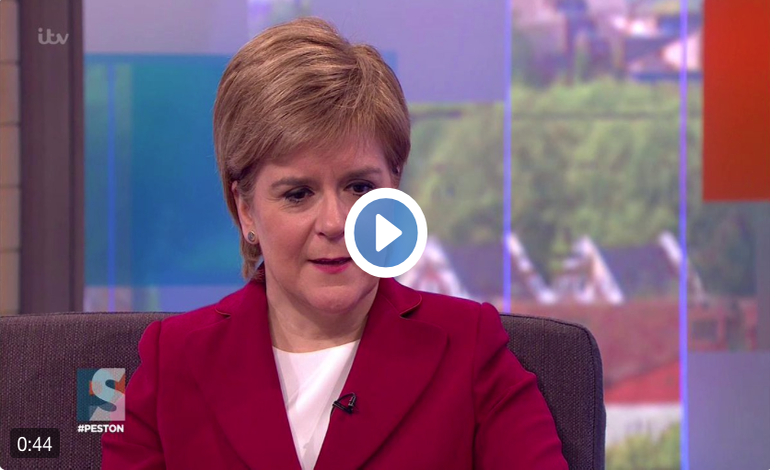 Nicola Sturgeon’s appearance on ITV‘s Peston on Sunday show explains why Theresa May is refusing to participate in leadership debates ahead of the general election. Because the Scottish First Minister demolished May in 44 seconds.

Sturgeon told Peston that she believes May is refusing the debates out of fear. While Sturgeon and other party leaders will be debating their policies and record before the public, May will not.

If I can use a Scottish word, it kind’ve looks like she’s feart (which means frightened) of the scrutiny.

You know, I think doing TV appearances like the One Show is all perfectly legitimate. But not as a substitute for the hard questions and the hard scrutiny. So I’ll be delighted to put myself into that debate on Thursday.

Theresa May seems to want to go through this election dodging the public, dodging any real questions. You know. there’s been reports that the media have to submit their questions in advance.

So I’ll challenge her today. You know, change your mind. Come and join us on Thursday. I’ll say the same to Jeremy Corbyn. And let’s have a proper debate where we all put forward our policies, where we all are subject to scrutiny and hard questions as well.

.@NicolaSturgeon calls out @theresa_may ahead of #ITVDebate on Thursday, suggesting the Prime Minister is "frightened" #Peston pic.twitter.com/sujCJdu324

May’s campaign has been calamitous. So far, she has almost exclusively attended events with prepared audiences, with ordinary folk kept away from view. But even with this level of control over the guest list, her audiences still looked like they’d arrived in blindfolds and handcuffs:

Further embarrassment came last week, when bystanders took behind-the-scenes photographs of a campaign event. The difference between the staged Conservative campaign photos and reality was stark.

This was how May was represented by the media.

While this was the unstaged version of events.

Amid the calamity, three of May’s senior advisers have quit the campaign.

Elsewhere on the campaign trail

The opposition leaders are a world away from the stilted and calamitous Conservative campaign. And the difference has seen May’s lead in the polls cut sharply.

The SNP in Scotland and Plaid Cymru in Wales have also been rallying support from the public:

There is a mountain to climb. But it’s beginning to feel like the UK electorate might just be about to deliver a major upset on 8 June.