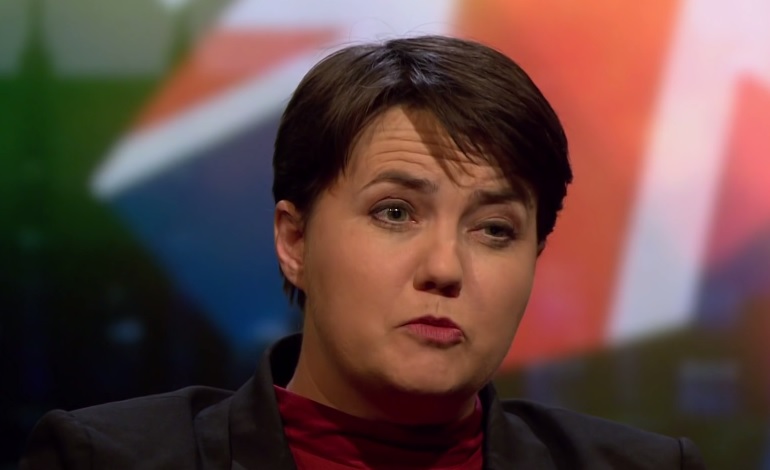 Scottish Conservative leader Ruth Davidson tried to damage Jeremy Corbyn on 14 May. But instead, she ended up defiling the memory of her party’s hero, Margaret Thatcher. And she managed to insult all those we send to war in the process.

That’s quite a balls up in just 23 words.

Newspapers over the weekend were awash with stories about Corbyn’s talks with the IRA in the past. A spokesperson defended Corbyn’s record, saying:

Lasting security comes from peace through negotiated agreements. Jeremy worked tirelessly to bring about that peace in Northern Ireland through dialogue, which culminated in the Good Friday Agreement.

Responding to that statement, Davidson tweeted:

Corbyn's spokesman saying Jeremy wasn't on the side of the IRA, but simply seeking peace is offensive to anyone who's worn the uniform.

So according to Davidson, talking to the IRA in an attempt to seek peace was “offensive” to everyone in the military. But as people quickly pointed out, that means Davidson was also vilifying Thatcher:

You should never open cans of worms Ruth
Thatcher negotiated with the IRA pic.twitter.com/fOy4lF73Ty

Thatcher held secret talks through an intermediary with the IRA during the hunger strikes in 1981. And Tony Blair also negotiated very publicly with the IRA. Those were the talks that ultimately brought peace to Northern Ireland through the Good Friday Agreement. Furthermore, over the course of decades, there was allegedly collusion between the British state and paramilitary groups in Northern Ireland; reportedly leading to hundreds of deaths. This was detailed in a Panorama documentary called Britain’s Secret Terror Deals.

Davidson’s comment was also challenged by those who’ve ‘worn the uniform’. The people she was supposedly defending:

I wore it and this statement is Fallon-level bollocks. https://t.co/6BZxO612ZC

Someone who apparently did wear the uniform, then, thinks this comment is “Fallon-level bollocks”. A reference to Defence Secretary Michael Fallon’s run in with Labour’s Emily Thornberry on the latest Andrew Marr Show. Thornberry accused Fallon of talking “bollocks” after she had confronted him over a party he had allegedly attended in honour of Syrian President Bashar al-Assad.

And Glenton is right. Surely peace is exactly what those in the service want. Because it is peace that, in the case of Northern Ireland, halted the bloodshed, both there and in Britain. It’s arguably why many join up – persuaded that their service will bring about a safer, more peaceful world.

But it’s now general election season. And so many politicians are throwing their all into attacking opponents, at any cost. Davidson’s effort, however, has inadvertently shot down Thatcher and presented our troops as gun-toting, war-hungry fanatics.

That’s really quite the balls up to make in one little tweet.