When the Conservative manifesto was released many people were shocked by the inclusion of what’s been branded the ‘dementia tax‘. A policy which means anyone who needs care will be charged after they die if they’re worth over £100,000. A valuation which will include people’s homes as well as savings. Even if they’ve paid their way all their life.

The Daily Mail initially presented the proposal as a positive. But the growing backlash against the policy has been so strong that even it is backing away from it.

On 18 May The Daily Mail gave the policy front page attention. It framed the story as if it were a big win for the elderly. It also pointed out it’s available to ‘EVERYONE’. Just in case some people worried they might miss out on having their property and life savings seized: 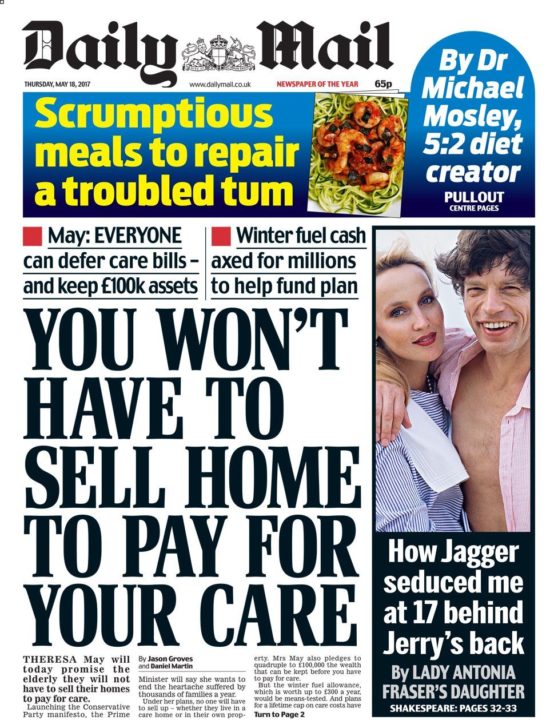 On 19 May The Daily Mail praised Theresa May’s ‘honesty’ and wrote on their front page:

Theresa May yesterday put the needs of ordinary working families at the heart of a pragmatic plan to deliver a better deal for ‘mainstream Britain’. 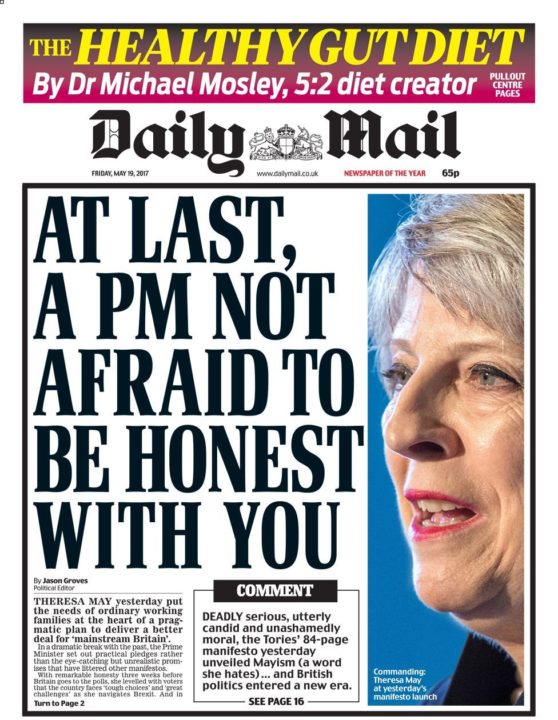 But by 21 May, the backlash had set in. The message had got out that the Tories were going after people’s assets and savings. And The Daily Mail put some considerable distance between itself and the policy it had praised just a few short days ago: 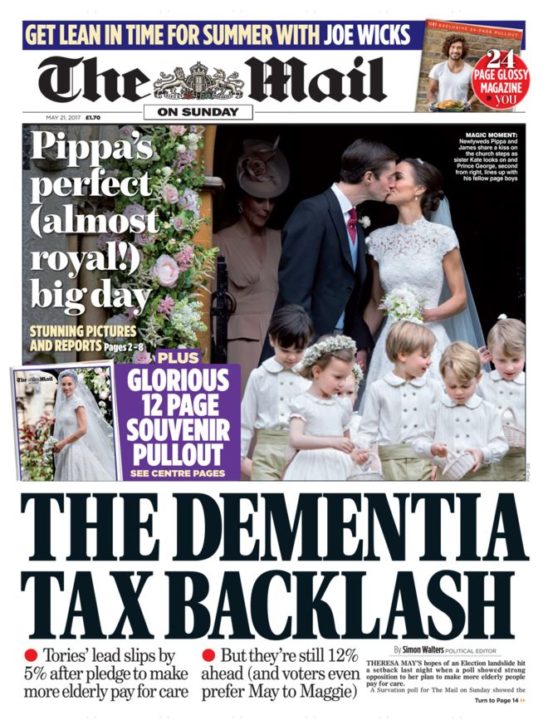 It’s important to note that The Daily Mail is openly referring to the policy as the ‘dementia tax’. Obviously, this is not how the Conservative manifesto refers to it. This is a name given to it by critics of the cruel policy. A policy which will affect many people who suffer from conditions like dementia.

The fact that The Mail on Sunday has openly used the name on its front page shows that they’ve given up trying to defend what could be May’s biggest misstep yet. An article by Simon Walters, The Mail on Sunday’s political editor, presents the ‘dementia tax’ without a positive spin:

The proposals would mean that tens of thousands of people who receive care at home could face costly bills as – for the first time – the value of a person’s home will be included in their assets, with only the last £100,000 protected.

But he also calls the cruel policy a ‘tough choice’ that is “vindicated” by her other plans:

Mrs May’s decision not to flinch from tough decisions in her manifesto is vindicated by a more favourable response to other proposals.

May is taking many things for granted. She’s assuming unwavering support from the elderly, the right-wing press, and her supporters. As such, she’s running a horrible campaign in which she fails to give an account of herself. Probably because any true account would mean explaining why she’s punishing the very voters she relies on.

The Daily Mail may support the Tories, but they can’t support policies that so blatantly attack their readers. The problem for May is that policies which target ordinary people are what she’s selling. And as a result, voters are deserting her in droves.