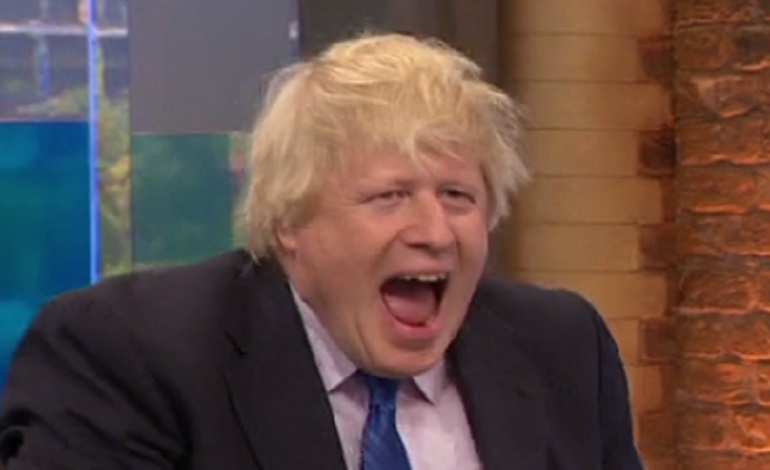 Foreign Secretary Boris Johnson is not known for his subtlety. But an incident on ITV’s Peston on Sunday showed that the Tories will do whatever they can to give themselves an advantage in the general election.

Johnson was caught sneaking a look at host Robert Peston’s interview notes. Presumably with the intention of checking what questions he was going to be asked before Peston began the interview:

But not only was Johnson’s pilfering caught live on air, Peston’s producers decided to release photographic evidence of the extent of the Foreign Secretary’s sneakery:

Here 's Boris stealing and copying my homework (ie reading questions I planned for him, while I interviewed @NSoames & @jessphillips). pic.twitter.com/xe1KXgMgag

Social media predictably blew up over Johnson’s actions. But Bloomberg’s Robert Hutton saw something else in his seeming buffoonery:

OUTSTANDING distraction effort from Boris Johnson, literally stealing his way onto #Peston set to stop Soames from discussing Social Care… Johnson is Tories’ living “dead cat”. If their poll lead falls any more, they’ll stick him on another zipwire for the rest of the campaign.

And this ‘political clown’ image is one Johnson uses to his full advantage. As Cahal Milmo wrote for The I Paper:

Johnson has spent much of his life carefully cultivating the public persona of the learned clown, an Eton-educated jester whose boundless blonde ambition is artfully concealed behind a shape-shifting fortress of bumbling wit.

Not to be trusted

But many of Johnson’s off-the-cuff comments show a darker side to the former Bullingdon Club MP. In April 2016, he said that Barack Obama’s part-Kenyan heritage may have been the reason a bust of Winston Churchill was removed from the White House:

And in a column for The Telegraph in 2002, Johnson called black Africans “piccaninnies” with “watermelon smiles”. He also once described Hillary Clinton as a “sadistic nurse”.

While Theresa May attempts to promote the Tories as “mainstream” politicians, Johnson shows they are, in reality, none of these things. Detached from reality, self-serving and not to be trusted, he encapsulates the deviousness of the Conservative Party. One where personal and political gain trumps professional integrity. And the good of society more broadly.